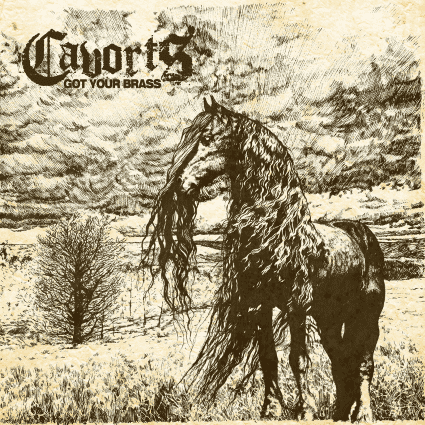 In At The Deep End have a reputation as a label of finding bands and unleashing them on the public and watching them go huge. In the past the label has given us albums from heavyweights such as Gallows, Architects, Suicide Silence and many more. Their latest signings are South Yorkshire’s loudest. The Barnsley four piece Cavorts have joined forces with one of the undergrounds most respected and legendary labels to drop this their debut Got Your Brass.

The opening riff of title track ‘Got Your Brass’ starts off the album and shows straight away that the band are in no way going to ease you in to this. It is literally seconds till you are smashed in the face by a huge wall of sound. The power behind the vocals delivered by singer/guitarist Ryan Senior are just ferocious. The heaviness is just superb but don’t think this is just some one trick pony who’s only gear is loud and heavy. At one point the wall strips back to a dual guitar with a deep riding rhythm before it kicks you to the gutter once more.

‘Pig Of Ballast’ quickly follows with a distorted bass and drum beat that unleashes into a powerhouse of a track . Once again the guitar work between Ryan and guitarist Dale Evans is crazy. It really is what sets the band apart from other bands out there in the hardcore world. ‘Wait On’ opens with that dual guitar the band do so well before opening out into four and a half minutes of pure groove, riffs and a chorus which will no doubt cause bloodshed at venues across the land.

It seems there are no weak links in Cavorts: be it vocals, guitars or the ridiculously solid rhythm section of bassist Rik Whitehead and drummer Richard Murray. It’s hard to find any chinks in the amour Even down to the song titles. There is something purely Barnsley about a band who have song titles like ‘Got Your Brass’ or ‘What’s Cracking’.

‘Save Some Things’ proves the band are bringing something very different to the hardcore scene. In a time where it seems it has become all about how many breakdowns you can have: Cavorts are bringing a breath of fresh air. As proved in ‘Kicks & Strikes’ the band have groove, they are not afraid to change gear and mix things up. Also they can write a melody, something that sticks with you. ‘By The Tide’ closes up shop with a chugging riff that spreads out into a curtain call of everything that makes this album great.

We have seen this band live on many occasions and know they can do it live just as well as they do it on record. For other bands out there that should be a very frightening prospect indeed. A thunderous debut that we have no doubt should, if there is any justice in the world, push them up to the fore of the UK frontline in heavy music. Not just hardcore, not metal, this band have something which will appeal to anyone who has any kind of fondness for alternative music.