Eminem Can Say Whatever He Wants About Ann Coulter, Because She’s A Nazi 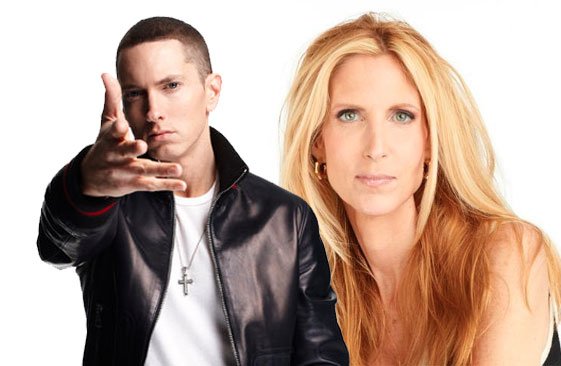 You don’t have to read this article to know whether or not you’ll agree with it. It all depends how you answer the following question:

Q: How should we deal with Nazi’s?

A: Punch, kick, assault, hospitalise and where possible murder them.

B: Sit down for a calm rational discourse.

9 times out of 10, calm rational discourse isn’t just necessary, it’s essential. But this case is different. Firstly people are confusing Nazism with conservatism. Conservatism may have some ideological goals about ‘boarders‘ and ‘our country first’ politics; but it isn’t Nazism. Someone who identifies as a conservative certainly can be a Nazi, but identifying as a Nazi, means you are a Nazi. Not a conservative. Not ‘saying what we’re all thinking’. You’re just a Nazi.

So now the latest upset is over Eminem. No stranger to controversy, he’s in trouble again. Again, with women. But this time there’s a problem with the outrage. No this isn’t a condemnation of ‘outrage culture‘ (Which is a myth) or how the art shouldn’t be policed. No, this is actually about Em’s targets. Love him or hate him, Em is the lord of the soft target. He came out gunning for Moby, Michael Jackson, Vanilla Ice and a lot of the time women. Britney Spears, The Spice Girls and later Mariah Carey and Lana Del Rey. From rape to incest to violence against women, Eminem’s celebrity ‘victims’ cover a wide spectrum and honestly there is a whole other article about that, but today we stay with his latest and why she is different. And why it perfectly acceptable to make any sort of joke you want about this person. This person is political commentator Ann Coulter. Of who Em rapped on Big Seans ‘No Favors’:

‘And fuck Ann Coulter with a Klan poster
With a lamp post, door handle, shutter
A damn bolt cutter, a sandal, a can opener
A candle, rubber, piano, a flannel, sucker
Some hand soap, butter, a banjo and manhole cover
Hand over the mouth and nose smother
Trample ran over the tramp with the Land Rover
The band, the Lambo, Hummer and Road Runner
Go ham donut, or go Rambo, gut her, make an example of her
That’s for Sandra Bland, ho, and Philando‘

So it’s pretty obvious that Em isn’t going to ask for her consent making this a rape joke. And jokes about rape aren’t like jokes about murder. The lines between whether to shoot someone aren’t nearly as blurred when talking about consent. We are literally still having these discussions and whether or not we like to admit it, rape culture is very real. But Ann Coulter differs in a few key ways from Em’s usual victims. Here’s a few choice selections:

Couple all that with this gorgeous tidbit and you have a white supremacist. There’s an argument to be had about the differences between white supremacists and Nazi’s; but she’s using nomenclature of both so we can just go ahead and call her a a Nazi. And I’m sorry, it’s gloves off when we’re dealing with Nazi’s. Does Ann Coulter deserved to be raped? Is this song telling anyone to rape Coulter? No. Could this song hurt Coulters feelings? Maybe. Do her feelings matter at all? No.

The person that has the privilege to sit down and have a rational conversation with a Nazi, is unlikely to be in the group the Nazis want to oppress. And by oppress I do mean murder. It’s very easy to say we shouldn’t punch Nazis when you can walk past a Nazi without being attacked. Despite our history, we’ve come to expect all people to be treated equally and went to war over people being executed for simply being themselves. This isn’t something that can be reasoned with. Someone identifies as a Nazi and not a conservative they are allying themselves with Hitler and embracing the atrocities he committed.

Here, ‘two wrongs don’t make a right’ is a fallacy. The wrong here, is genocide. Fighting back against the extermination of a race isn’t aggression, it isn’t a ‘wrong’ it’s self defense. When Eminem expresses hate for Ann Coulter this isn’t his usual brand of tired misogyny. Ann Coulter spends her career dehumanising people. Branding Mexicans incestous paedophiles and that women are too dumb to know what to do with the vote. These people don’t deserve our understanding, they can’t be viewed as human, because to do so normalise their actions.

Proof that we are normalising extremism? Richard Spencer can give a speech ending ‘hail Trump‘ resulting in nazi salutes from the crowd and we allow him the identify himself as a member of the ‘alt right’ and not a nazi; we have officially normalised Nazis. Defending Ann Coulters rights as a woman when she LITERALLY rejects them, is again privilege. Privilege not to be part of the group who are a target of her supremacy and a target of the people she is riling up. See also: people claiming that Trump is a rapist, a paedophile, has committed various acts of sexual assault, is a racist and also a shit businessman but ignore that and focus on the fact that we shouldn’t be fat shaming him? Well I ask when Hitler murdered 6 million Jewish men and children simply because he didn’t like them, one of those people who managed to escape being murdered then made a joke about how Hitler likes to be pissed on; would it be unacceptable to ‘kink shame’ him or is the fact that he committed genocide maybe not quite the same as being mean to him?

Eminem links the lives of Philando Castille and Sandra Bland with the diss to Ann Coulter. This is because she upholds the same racist views and systems that murdered these people. No one is calling for Ann Coulter to be raped. And if the worst should happen, that would be a crime. And you know who should go to prison? The actual rapist. But then to take the incredibly relevant message of the song and wash over it in fear of hurting the feelings of someone who has made a living dehumansing people, again is ignoring a problem that doesn’t effect you for self interest. Yeah, I know you’re sick of it, but privilege.

And it’s very telling. Accusations of tone deaf, non-intersectional feminism go all the way back to ‘The Bell Jar‘. And here is that very conversation at its most potent. The idea America has a law enforcement that is not only racist, but created for the specific imprisonment and murder of black people, is uncomfortable. The fact that white and black people are treated differently is also uncomfortable. The fact that despite globally broadcasted evidence of Trump’s views on sexual assault not only didn’t lose him the election but of all groups of women, white women voted for him the most, is uncomfortable and also says a lot about racism. And again intersectional feminism has been a huge issue in the feminist movement for a long time. This song isn’t about rape. And maybe Eminem could’ve worded it better or maybe it needed to be worded this way so people can stop picking and choosing what to care about. Eminem’s verse is about the new even more racist climate America is in. And to make it about something that irks you and ignore the message is derailing.

For people who don’t care about these people or any of the groups that Coulter and Trump target, it’s very easy to gloss over. But it’s an important statement To make. And the truth is Trump and Coulter are protected by their white supremacy. A condemnation of Mexicans and Muslims results in a rise in hate crimes. A condemnation of Coulter and Trump results in at best, hurt feelings.

Ann Coulter is a nazi. And there are no words Eminem can say that matter more than that.

So yes, from the bottom of my heart, fuck Ann Coulter with a clan poster.