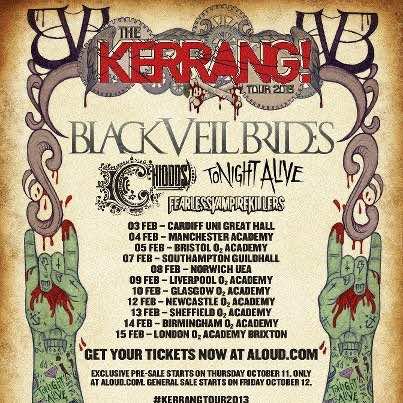 Kerrang have finally unleashed the details surrounding next years Kerrang! Tour and it’s sure to cause some controversy.  Previously bands such as New Found Glory, Good Charlotte, All Time Low and Mindless Self Indulgence have headlined the affair. But this years headliners are Black Veil Brides. There are sure to be plenty of people out there that are screaming their heads of in joy but also plenty of people who wish to throw things at the Kerrang staff who helped to chose them.

But the tour isn’t just about Black Veil Brides. Joining them on tour will be Chiodos now fronted again by the man himself Craig Owens, this tour see’s the bands first tour in the UK since Craig re-entered the band. They will also be joined by Tonight Alive and Fearless Vampire Killerswho were nominated as ‘Best British Newcomer’ at this years Kerrang! Awards.

Regardless of what your opinions of the headline band are, this tour is going to be one party worth remembering. Tickets go on pre-sale tomorrow and general sale on Friday 12th October. The dates for the tour are as follows: