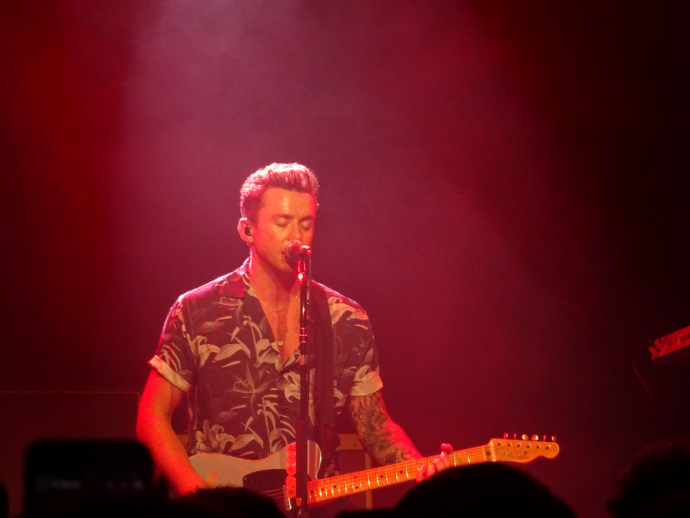 With McFly taking a break right now fans were beginning to get restless for new music. Luckily, front man Danny Jones is going solo and it sounds fantastic.

Eager to hear his new tunes, fans gathered at Islington’s O2 Academy on Monday night for Danny’s debut solo show. Kicking off with energetic and instantly likeable ‘True Crime’, it was clear almost immediately that no-one would leave disappointed. As to be expected from the person who helped write the likes of ‘Obviously’ and ‘Star Girl’, his solo material is full of catchy guitar riffs and sing along choruses. I found myself already humming them on my journey home. Soulful, folk influences from his musical hero Bruce Springsteen can definitely be heard in this solo project. Stand out tracks included ‘Bad Habits’, ‘5am’ and ‘Muddy Water’.

Explaining the meaning of each song (in between making various jokes), it became clear that this album is full of many personal songs inspired by his own life experiences. Gone are the days of singing about cooking broccoli – the new record covers subjects from parental break-ups and relationship strains to self-doubt. The album’s overall sound is not a million miles away from McFly but it is definitely more mature. His powerful, distinctive vocals sounded as incredible as ever, especially in such an intimate venue.

“Some people are simply born to perform and Danny is certainly one of them.”

Of course, the night wouldn’t have been complete without one or two nods to Danny’s McFly origins. Performing ‘Shine A Light’ as well as part of ‘Not Alone’ and ‘Obviously’, the crowd sung back every word. Although everyone there was clearly excited about this new project, it still felt very special to hear songs from the band so close to their hearts. He also performed a brilliantly rocky cover of Dua Lipa’s ‘New Rules’. The set only lasted for little over an hour but it left the crowd literally screaming for more – a good indicator of just how well the new music went down.

Danny has lived and breathed music his whole life and this was glaringly obvious throughout tonight. There were almost no signs of nervousness (just the odd comment about it being “mad”) and he looked just as confident on his own as he ever did in McFly. Some people are simply born to perform and Danny is certainly one of them. It felt strange at first watching him without Tom, Harry and Dougie but he was clearly so happy to be back on stage. It’s obvious this is where he belongs.

It’s fantastic to finally see Danny doing what he loves again and absolutely killing it. We can’t wait to get our hands on the album – please don’t leave us waiting too long!