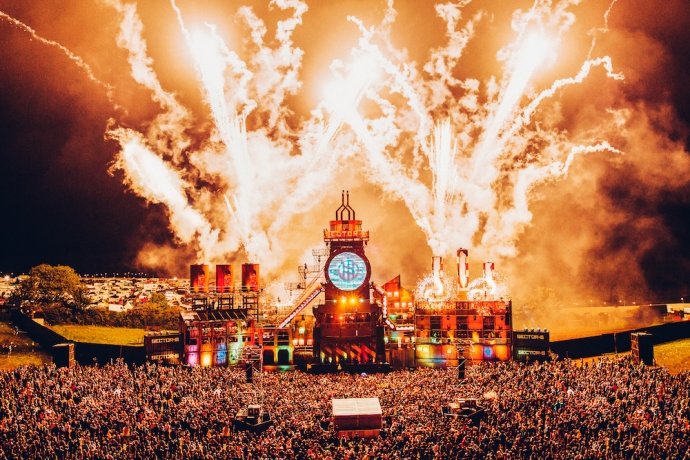 A saturated market has meant UK festivals are finding it harder to sell tickets or even generate hype for their events; except for one… Glastonbury. However, a few hours away, near Winchester, is a festival that’s relentlessly compared to the beast of Glasto; ‘The Machine’ that is Boomtown Fair.

The festival season feels empty without some legendary rock band performing to thousands of muddy, stinky people at Pilton Farm, but a recent party in Matterly Estate filled that void. Boomtown entered its 10th Chapter in typical fashion; laser light shows, mind-bending production and an incredible eye for detail. If you’ve not managed to lose your Boomtown virginity yet, I feel for you because there aren’t many festivals like this one. The best way to describe it is if Glastonbury was married to Tomorrowland, but Glastonbury had an affair with Burning Man but never told Tomorrowland and raised a Burning Man baby as their own. That baby would be Boomtown.

The most admirable thing about Boomtown is their unapologetic style of putting on an event their way; no half measures, and the most delicate of details for their audience’s experience. They spread the madness and magic between fifteen districts with different distinct themes, but follow an apparent inspiration from the films Mad Max, The Fifth Element, and even a hint of our inevitable Black Mirror future. The anti-establishment and anarchic harmony is felt as every festival-goer becomes a part of Chapter 10’s story of fighting for freedom from the mighty Bang Hai Corporation. From the massive fire-breathing stages of Sector 6 and Bang Hai Towers, to the small unchartered rooms in the Old Town, the actors and performers coherently kept to the script as the concept became the weekend’s reality.

But does this 10-year-old festival deserve to be in the same league as the most iconic festival in the UK, wait no, music history; is Boomtown better than Glastonbury?

For me, Glastonbury is the most complete festival I’ve ever attended. The sheer size of the festival and the amount that happens within in the fields allows everyone to feel welcomed and have an experience that feels catered to them. My habit of comparing everything to Glastonbury is starting to get out of hand. Let’s be honest, no one can compare with Glastonbury’s line up with the names and legends they bring to the pyramid stage and the number of acts they have throughout the 5-day stint.

However, with a band like Gorillaz headlining, you have to take Boomtown seriously. The band has some of the best music released between 2000 to 2006 and when De La Soul joined Damon Albarn and the band on the Lion’s Den for the 2005 classic ‘Feel Good Inc’, the crowd went into a frenzy. Yes, Glastonbury has the T-Shirt, but this is a huge step for Boomtown who are more known for their heavy involvement in the underground music scene where bass-heavy sub-genres reign supreme and coherently thump next to roots and reggae sounds. It certainly proved to me that the bigger, more main stage names have a place at Boomtown, but they are still a long way away from matching the superior Glastonbury line up.

So, Boomtown isn’t as good as Glastonbury? That’s not what I meant, because Boomtown is striving in ways that Glastonbury can’t due to its size. The need for the music comes first at Glastonbury, forcing them to maintain these large names, whereas Boomtown focuses its energy on the production and the experience. Its personality is what makes Boomtown; it’s like a seed fell from the Shangri-La tree in the South-East corner of Glastonbury and bloomed uncontrollably near Winchester. From the moment you walk into a district you’re invested in the Boomtown reality and as you bounce around the other areas you are submerged into the chapter. You’re not alone, most citizens of the town join in making it hard to decipher who is an actor and who is a festival-goer and this is the core of why Boomtown is becoming better than Glastonbury.

Being on their fallow year, it’s hard to know what tricks Glasto had up their sleeves, but one thing we do know is that audience’s needs and wants are changing. I started the piece by saying the festival market is saturated, but actually, the whole music industry is becoming thickened with music. As physical and download album sales aren’t what they used to be, the shift in the last decade has resulted in musicians and bands touring a lot more. You’re nearly as likely to see you favourite artist perform in a city near as you are at a festival. Unless you’re spending stupid amounts of money on acts, people aren’t buying inflated festival tickets when they can spend half as much at a gig 30-minutes away.

Fortunately for Glastonbury, their legacy will push a few more generations to Somerset regardless of the lineup, but it’s unsure if that’ll be the case in 5-10 years time. On the other hand, Boomtown has become the future of festivals: an immersive experience from the moment you walk through the gates. Audiences want to feel and experience something real, something more than staring at the main stage. How do I know this? The people you see at Boomtown are much younger than the people at Glastonbury. Ticket prices are more or less the same, and the headliners at Boomtown aren’t traditionally as strong or impressive as Glastonbury, but the next generation of festival-heads are mooching to Winchester. The alternative culture is building momentum and Boomtown’s authentic message is shiny and attractive.

This isn’t a secret to Glastonbury, hence why they’re set to open the gates to their new sister festival Variety Bazaar. From rumours circulating in the festival world, this new project from the Glastonbury team will be more like a large Shangri-La, which sounds like Boomtown to me? Doesn’t that just say it all, when even Glastonbury’s team are trying to interpret Boomtown’s style of a festival?

Nevertheless, I’ve concluded that if you’re looking to see the biggest musicians to have ever recorded music, then Glastonbury is still by far the best festival. However, if you want an immersive adventure where every draw inside a dressing table, inside a small hidden stage, has an ‘easter egg’ piece of detail inside, then for that element, Boomtown is better than Glastonbury.