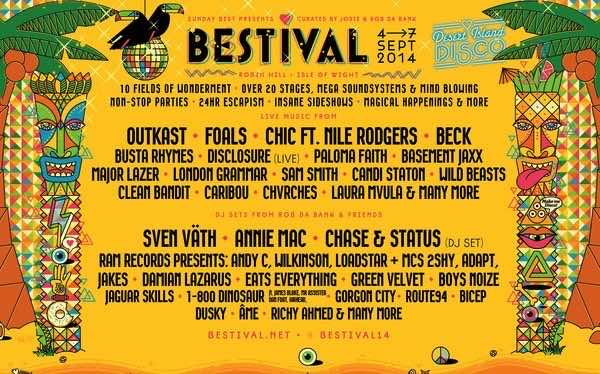 With Bestival now only days away we thought we would give you the run down of which acts we think you should see. So get your pen and paper at the ready and let’s crack on!

This year Bestival will be welcoming legendary hip-hop icon, Busta Rhymes, to the stage for his first ever appearance at a UK festival.

Since his first solo album in 1993, Busta has been a continuing presence on the hip-hop scene, producing over nine studio albums with countless celebrity features; his latest single ‘Thank You’, released at the end of last year, being a good representation of the mighty collaborations he has under his belt, not to mention the numerous singles he has produced as a solo artist.

Also headlining at dance and reggae festival Outlook in Croatia, it will be an honour to initiate Busta in all his glory to the UK music festival scene.

Over the past 10 years the historical city of Oxford has been somewhat of a home to the English alternative rock band. With groups such as Radiohead and Supergrass originating from the metropolis it’s easy to see why bands flourish. Because of the cities alternative rock pedigree, Foals were able to form and perfect themselves out of other bands. With Jack Bevan and Yannis Philippakis coming from The Edmund Fitzgerald, and Walter Gervers and Jimmy Smith originating from Face Meets Grill.

Since these early days they have created some uniquely wonderful music which will surely match the famous Bestival vibe so so well. This festival prides itself on its feel good atmosphere and electric pulse, therefore Foals could easily become the soundtrack for the weekend.