So, online dating. Where do we start with this touché topic and where do I start with my Tinder experience?

The most daunting aspect of my life was just about to start in a matter of minutes whilst waiting for the app to download on my phone, I was pretty nervous. I’ve heard all the crazy dick stories, girls selling themselves and so on, so why on earth did I volunteer to do such a feature?

Being the least sexual person EVER, I wanted to see just how honest men could be when it came to tinder. Needless to say, this was the most risqué experience in my entire life. So, just how honest can men actually be when it comes to on-line dating? I was intrigued to see how many would be willing to share their personal dick stories.

When I finally got the app, this is where things started to get interesting. I signed up and annoyingly I couldn’t make a fake profile, what is this monstrosity? I was sceptical, was there going to be people I know on there? What was I going to say? How can I change my picture? All the typical things that run through an innocent young mind like mine.

The swiping game begun and in just 10 minutes I already had 3 matches – little did they know what they were getting themselves into, the poor fella’s. As I’ve never been on a dating site before, I have to admit I was a little lost for words. As I wanted to see was how honest guys could be, do I approach small talk or dive straight in with, “How big is your dick?” Luckily for me, help was at hand with my co-writers suggesting raunchy questions for my not so subtle dating techniques. So the icebreaker went a little like this:

“Hey dude, how you doing? Can I be cheeky and ask how big your dick is?”

“Do you have a nickname for it?”

And just to add to the thrill of the controversial chat up line, we decided to add “How would you describe your motion in the ocean?” Boy was I going to be in for a treat for some of the responses that were in store for me. Unfortunately for me, my naïve, innocence got brutally destroyed. I guess that’s what you get for joining an on-line dating app and asking crude questions.

So casually getting into the swing of things and I was on a roll with my matches. I even got a cheeky few matches back dubbed as, ‘SUPER LIKE.’ Who thinks up these dating sites?

So, without further a due…let’s take a look at the contenders!

Dude One claimed he had 7 inches, but that’s not even the start of it. He states his name is BIG Charlie and claims his ocean in the motion is ‘quite good.’

Dude Two was aged 31 and seemed pretty confident in himself. Being brave, he admitted his junk measured up to 9 inches. He also claimed he was formerly known as ‘Dead Pool,’ with his devious ways. Little did I know he would start being overly confident and try sending pictures. It’s a no from me this time.

Dude Three claimed to be a ‘Muff Master,’ and claimed his ocean in the motion ‘is that of a young bunny that is having a taste of bunny vagina for the first time, rampant.’ He also went by the penis name of ‘Mandingo The 2nd’ Needless to say I’m scared for life, I will be avoiding his 10 incher (on the flop) for life. 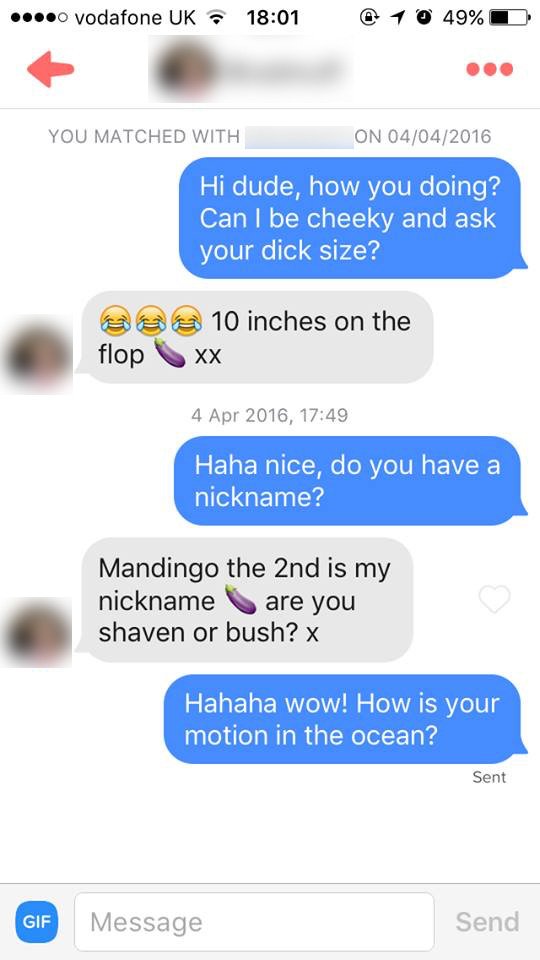 Dude Four just wowed me with his daring yet confident insight to his testicles. He went on to compare his downstairs to an Xbox Controller – bearing in mind the standard size of a controller is around 13.1 inches (hmmm!). Five stars for being that confident but dude, seriously? Who is going to believe your junk is that big? 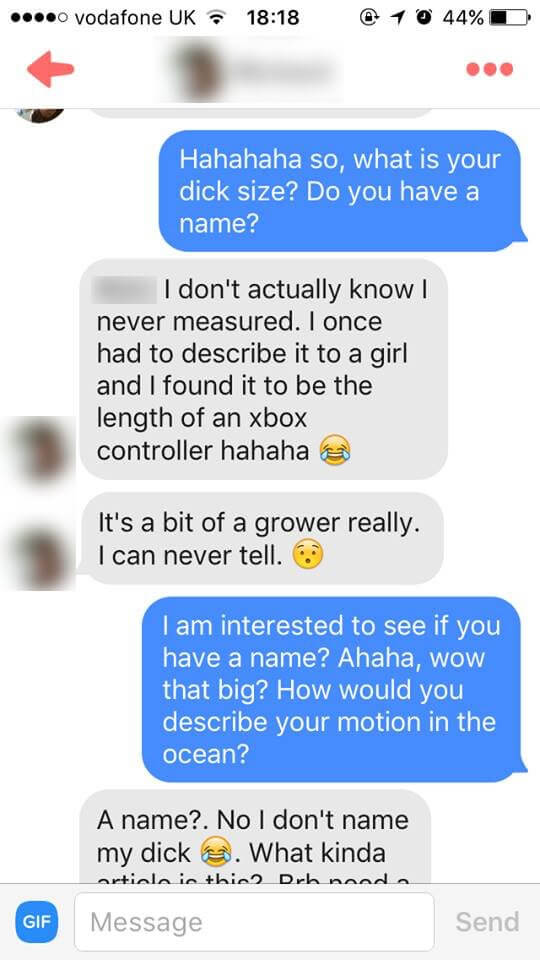 Dude Five was just like a closed book. At first, he was very subtle and wasn’t letting me in on any of his private information which I don’t blame him. Eventually, he opened up and it soon became time to click that un-match button. He claimed that his front was an average size of 5.8 inches to be exact. He says his nickname is, ‘the truth… because the truth hurts.’ (Ouch!) Needless to say, this ALMOST became a very deep conversation, but my inner sass came out and quickly unmatched. I ain’t got time for that business! 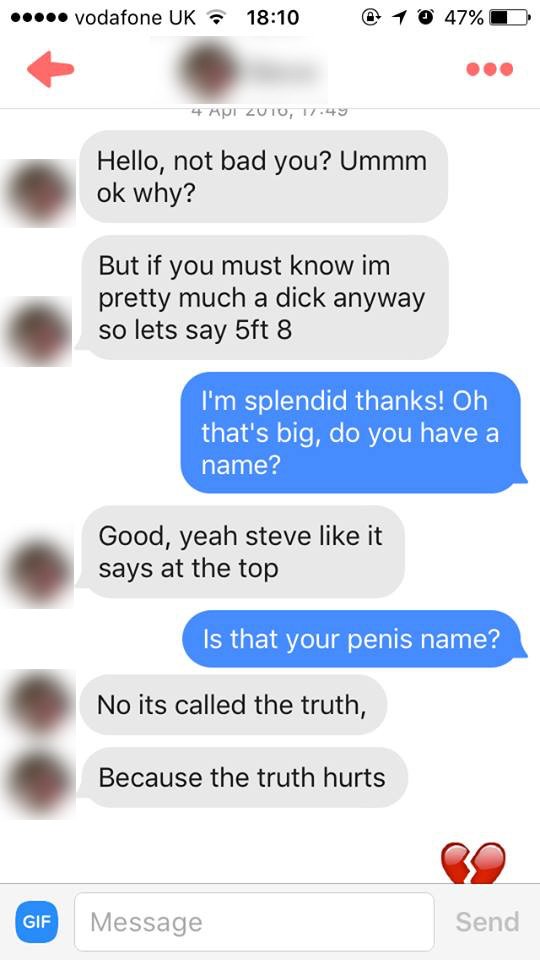 Dude Six was my ultimate favourite and did make me laugh out loud, literally. He was very forward to saying his size and was confident to say he was a big 9 inch. Little did I know what he would come out with for his nickname. He dubbed his penis name as, Pete The Postman, because he “usually comes knocking”. No pun intended. He later went on to ask what my, ‘ning ning,’ was named and being in an office full of men, how could I not let them take over. We asked him to name and shame and he came out with: “It can be named the pub, cause I always want it to be open.” All I was left wondering was what he wanted to drink?

For the hour I was on it, I had a pretty good run. I matched up with an outstanding 32 people but little did I know how filthy these guys responses would be. After messaging all 32, I managed to get a grand total of 9 responses. I hear you exclaim, ‘ONLY 9?!?!’ Yes, only 9 but do you realise how exhausting Tinder actually is? My inner bitch was coming out and I couldn’t handle any more requests of men wanting to show me their ‘humongous,’ dicks. Whether or not they were telling the truth or not, I didn’t want to know. What budding 22-year-old student wants to see some 40-year-olds piece? GROSS. Seems I was a little too open with my script this time.

So with all this (limited) data I managed to gather, here are are my findings…

For someone who has zero experience in being so sexual in the messaging department, this really is the site to use. Who knew you could get so much information out of people by using pure filth?

Needless to say, I’ve been dubbed the most forward person on Tinder and liked for my openness. Most were honest, but I guess two can play at the game. Who says men don’t speak with their dicks? Luckily for me, 23 people declined my offer of sharing their size.

So, I hope you’ve enjoyed reading my lavish tinder experience. Needless to say, I deleted this creepy ass app as quickly as I could.

GOODBYE TINDER, I won’t be coming back to you! 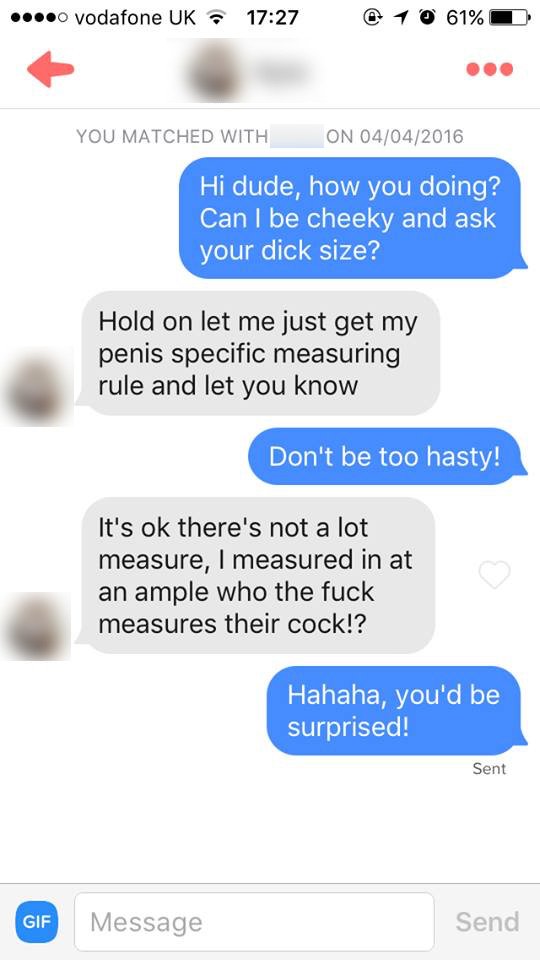 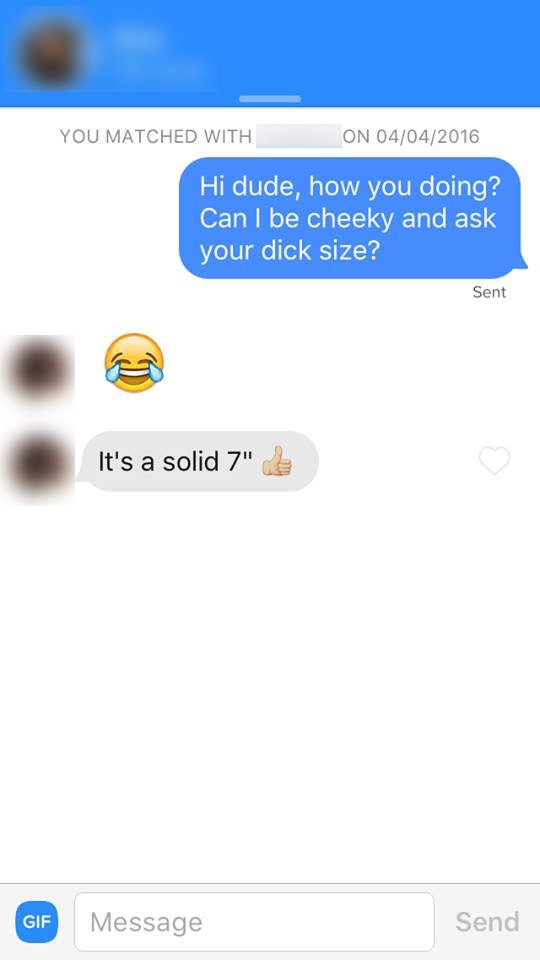 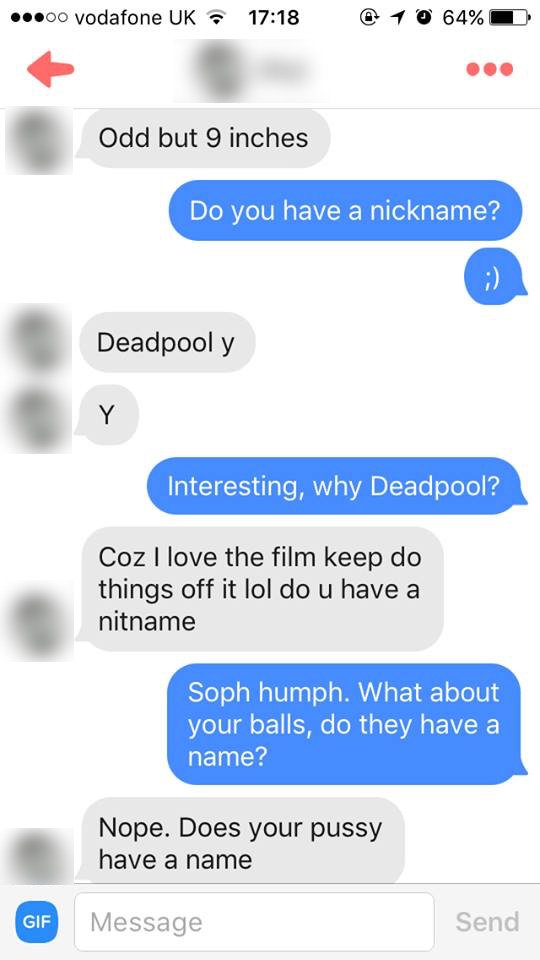 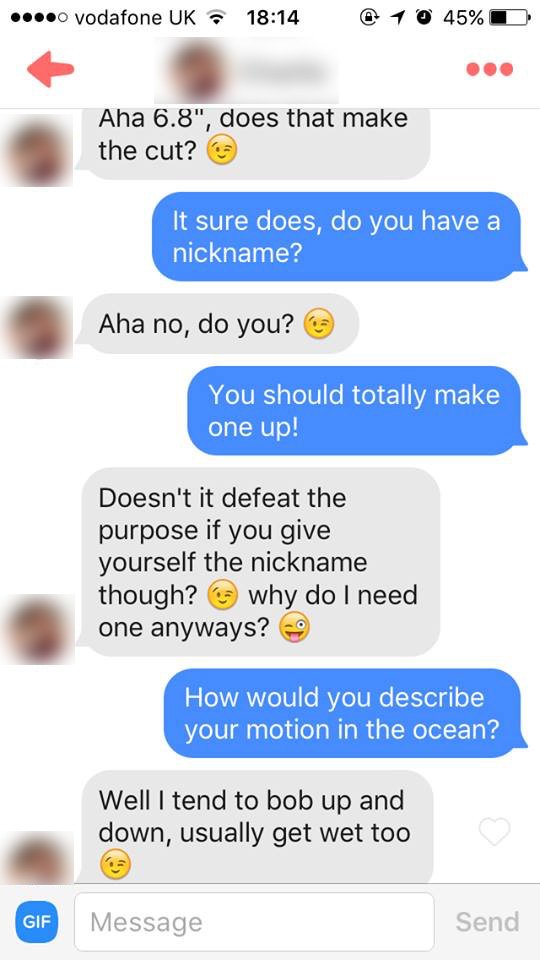 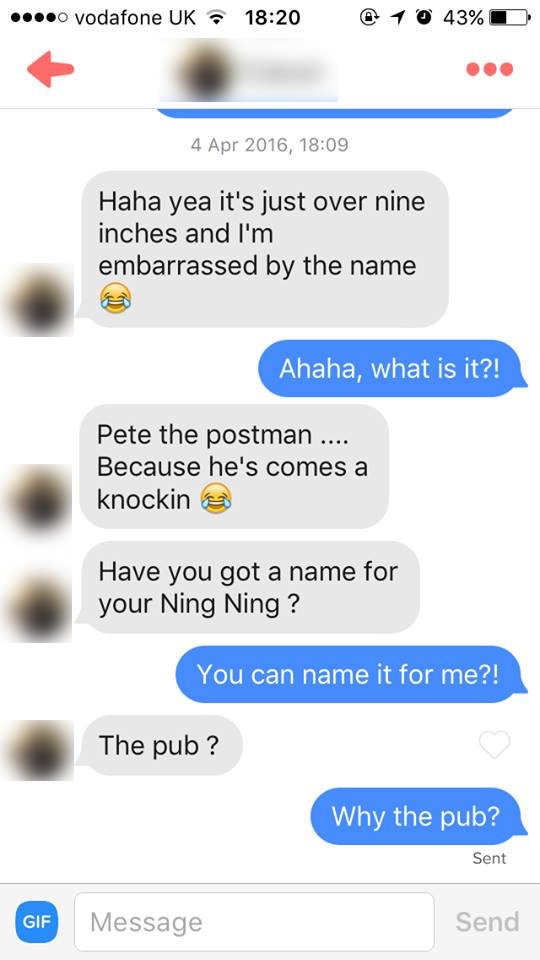 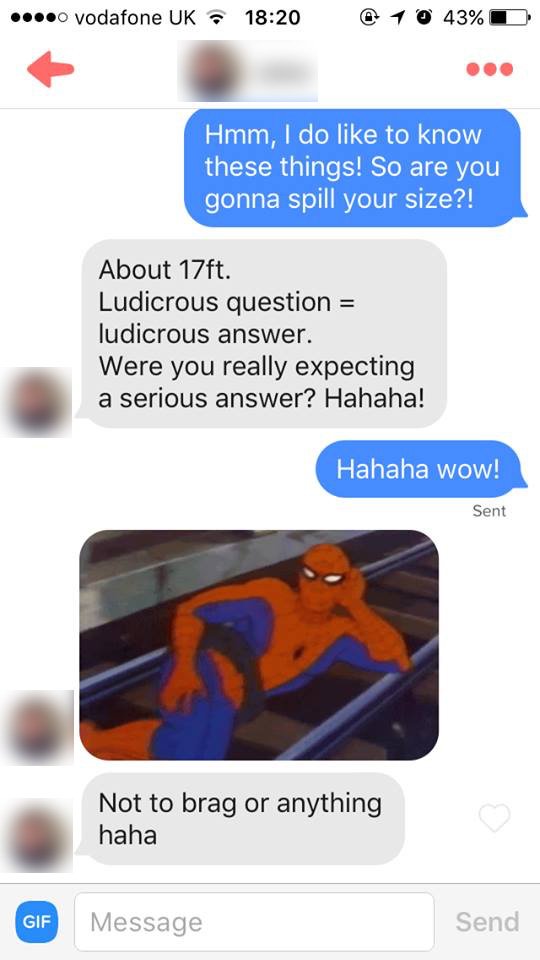 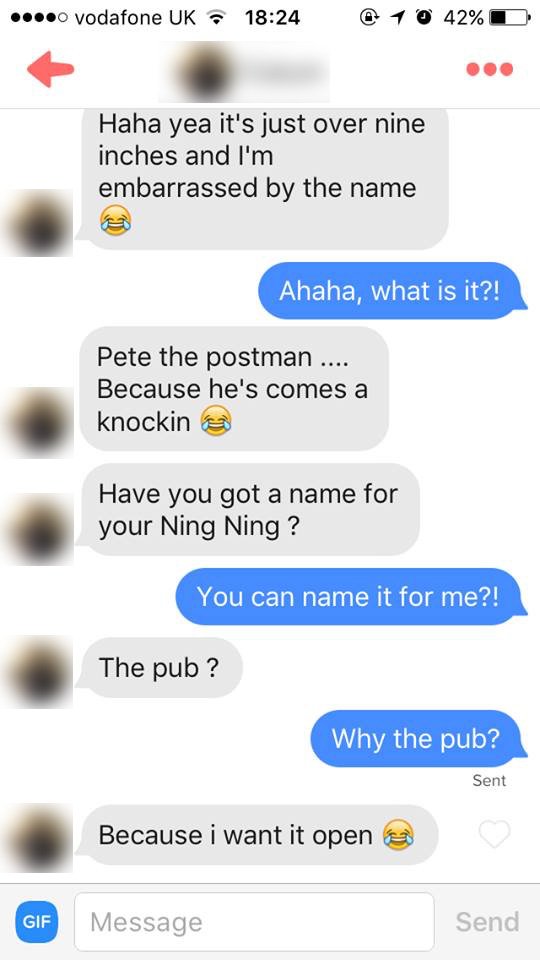