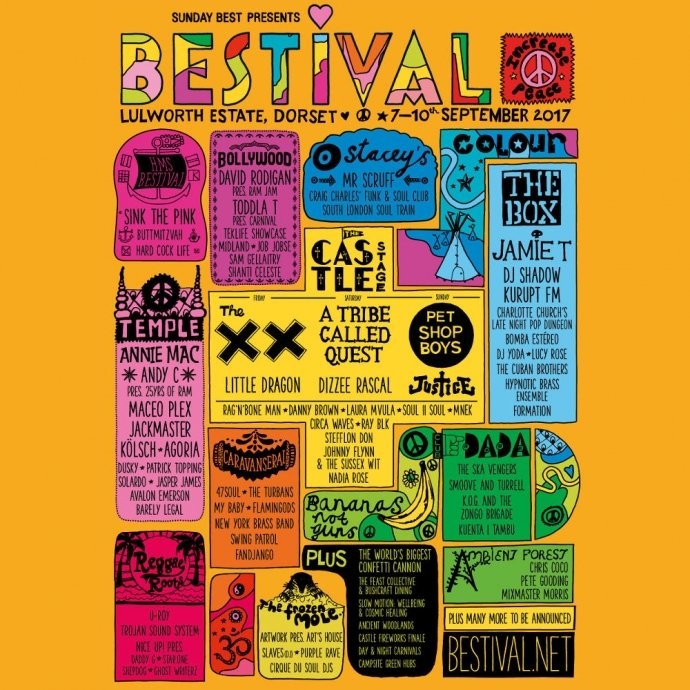 “Ch, ch, ch, ch changes” Bowie sang long before his passing. Was the great man talking about Bestival? Who knows? But Bestival certainly likes a change and this year they have left the Isle of Wight and moved ashore to the Jurassic coast of Dorset. Lulworth castle is the new home of Rob Da Banks famous festival and it now shares the same home as its sister festival Camp Bestival. We’re excited to be heading down, as the location is stunning and we no longer need to build a raft.

For those lucky enough to be heading to Bestival this year we have put together ten acts that you should probably try and see. But if you are happier to dance around in fancy-dress under the light of the moon; well that is fine by us.

The Scouse lads are one of the few indie bands this year and if anyone caught their Glastonbury set then you can be ready for some electric charisma and many of what some kids are calling ‘bangers’!

Jamie T is dropping into play to the early birds on Thursday night. His mix of urban-indie and hip-hop will fit right in with the festival vibe.

A festival favourite whose cut ‘n’ past DJ sets have become a festival ritual here and at Camp Bestival. Expect the finest dance floor fillers and some obscure delights.

One of the louder acts on the bill, Twin Atlantic have been slowly becoming one of the most-loved rock bands in the UK and the Scot’s have tunes that can match rock gods as notorious as Def Leppard and Biffy Clyro.

Rag ‘n’ Bone Man’s hit ‘Human’ has been impossible to hide from this year. But there is a whole lot more to this artist than just the one song. He has a glorious repertoire of music to choose from and a voice that has to be heard live to be believed.

One of the weekend’s headliners, the Pet Shop Boys are pop legends and are a ‘must watch’. So many hits to choose from, but with the 40th anniversary of Elvis Presley leaving us to the great gig in the sky, they surely have to play ‘Always On Your Mind’.

Another indie band from the North West – Clean Cut Kids are also an artist who carries an armory of indie-pop gems. Including this track ‘Pick Me Up’, they are surely going to be huge one day. Catch them whilst you still can.

France has more just the one famous dance duo and Justice can hold their own when it comes to electro-funk. Expect some freaky dance moves from the adoring crowd and a rather impressive light show – oh and some giant neon crosses!

The critically acclaimed, The XX, has made another incredible album and we can not wait to hear them show them off to a packed out the main stage.

Bestival has a tradition of classic hip-hop acts and this year is no different as the legendary Tribe Called Quest will grace us with their presence and showcase some of the best rhymes from the 90’s to present day. Can they kick it? Yes, they bloody well can!

The festival takes place from the 7th – 10th September and if these acts take your fancy and you still have not yet picked up a ticket, they are still available here.

See you down the front guys and don’t forget to dress up for the occasion!