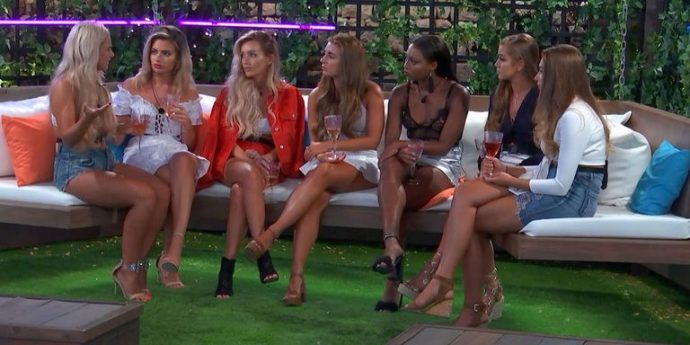 To put it simply, I hate Love Island. I believe it’s anti-women, anti-intellect… anti-what society should aspire to be. It’s a pile of shit, basically. No TV show has divided the nation more. I can honestly say that by writing this some of (the majority of) my friends will hate me. Maybe hate is a strong word, but when it comes to this show I can state that as fact. But after trying not to alienate everyone in my life by not going on social media and hour before, during and after the nightly show airs I just want to scream LOVE ISLAND REDUCES BRAIN CELLS (sorry, girls)! So, if you hadn’t already guessed, if you Love Island then you might want to stop reading now.

I don’t understand the fascination with women and men who are so fake and desperate to be “famous” that they’d shag on national TV. Have we really come to the point where the only way girls can feel self-worth is by walking around half-clad, orange-skinned and throwing themselves at “men” who only appreciate them for what they look like in a bikini? In a world where it’s hard enough to have a body even slightly different to society’s most coveted body type, Love Island is not doing any good for the modern woman, let alone impressionable teenage girls.

Why is half the nation obsessed with a ‘dating show’ that isn’t so about much dating as ‘how many people can I sleep with on the beach?’ Are we so unhappy with our own lives that we like the watch the car crashes of others? Does it take us to a place that though most of us will never go, let us dream of a life without modern-day issues? Or is simply we like to watch the youth of society make fools of themselves? 60,000 people applied for this year’s Love Island… why does that sound bloody terrifying?!

To give you lovers of the show a voice as well, I researched some of the psychological reasons the nation is obsessed. Professor of Language and Culture at the University of Sunderland, Angela Smith, has given her thoughts on the show’s popularity. “Firstly, there are a lot of dating and relationship shows on TV at present. These took over from make-over programmes, which were the defining genre of the first decade of this century. Many of these personal and fashion make-over shows morphed into relationship shows towards the end anyway.” Professor Smith argues that Love Island “tries very hard to be different” and focuses on younger, conventionally attractive participants. Their age makes them “relatable” for the target demographic, while their beach bodies “make the show engaging to watch”.  She added: “Love Island is post-watershed viewing, and the beach-body participants are set up for ‘sexual action’ by the context. The Big Brother-like camera system means that this can be captured for broadcast, and so makes what used to be called a ‘water-cooler moment’, which generates social media comment and wider media attention.”

Though Smith makes interesting points, a show that is specifically produced with what is deemed attractive people and then aimed at the young generation, who then it turn think this is normal – and more importantly the way women and women ‘should’ look. And with no sign of the show ending any time soon, more and more young people are tuning in and possibly wondering if they’re good enough.

Not only is the show utterly wrong in its obvious patriarchy but also in its representation of the 20-something woman/man altogether. It seems the production team didn’t go far when selecting the criteria for candidates, judging from the show it’s a list of 3 – for men, 6-pack, Harry Styles-style hair, and some appalling opinions of women. For women, a size 8 tanned body, hair extensions and very little self-worth when it comes to men and dating. Think I’m being harsh? Let’s look back at one of the most famous lines from possibly the mot sexist ‘man’ on the show. “You are the most frigid girl I’ve ever met in my life. You are frigid, aren’t you?” He then went on to say, “do I intimidate you? I thought so.” These charming lines come courtesy of Nathan Massey. The girl subjected to the harassment was Cara De La Hoyde.

It’s also been noticed that the show is one of the only remaining shows that do not include same-sex relationships or the LGBT community. Nothing other than fit boys and gorgeous girls are encouraged to mate and, of course, those relationships are nothing but real… nothing to do with the £50,000 prize at the end of it. FYI, it can’t be a genuine dating show when you’re only competing for money. And if you weren’t in it for the money? Then piss off from the endless tabloids – we all know you just wanted to be famous.

So, someone please tell me how this show is appealing? There is no argument that it’s good for anyone. What’s more terrifying – the fact that it’s a reflection of society or that people seem to think that that’s ok?

In this article:Casey Milano, love island