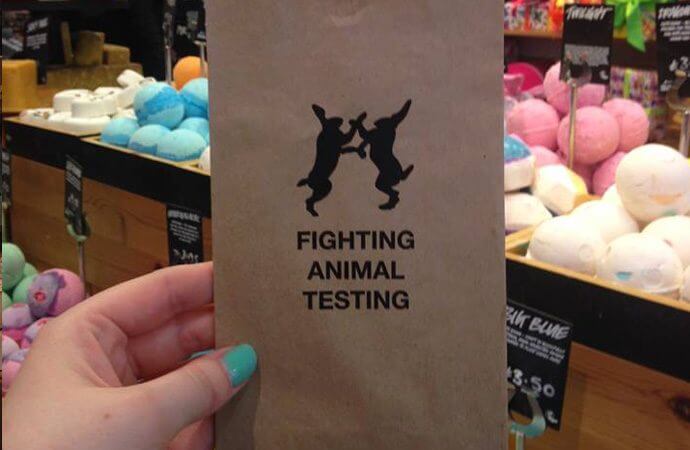 Known for its very ethical roots, beauty and soap store Lush has gained a huge fanbase over the years. The company is against animal testing, so its products are all naturally sourced and, of course, handmade. Everything is organic, from the oils in their bath bombs to the nuts in their face masks.

Lush has amassed a huge fanbase across the globe, with people Instagraming, Snapchatting and reviewing all things Lush – basically, if Lush sells it then the internet has already talked about it, and then some. We went behind the scenes to find out why Lush products are as big as they are and what goes into the ethics and process of creating such amazing products.

We were invited to pop in-store to interview the lovely Lou Scott, who told us a little more about Lush’s cruelty-free approach.

So, what’s your favourite product and why?

My favourite product is a rose water conditioner (Ro’s Argan Body Conditioner) which you use in the shower after you’ve done with your shower gel. You pop it on the skin and rinse it off and towel and you’re good to go. I’m a mum and it’s such a time-saver. The ingredients are phenomenal – it makes your skin incredibly smooth and you smell like Turkish delight!

I’d been a customer of Lush for 20 years before I started working here and I used to buy products as a teenager from a company called Cosmetics to Go, which was a company that came before Lush. I’ve been a vegetarian for 30 years, so it’s one of the things I’m really aware of and one of the things that really enhances my job. I don’t just sell soap, I sell really good soap, and the ethics behind the company are amazing. 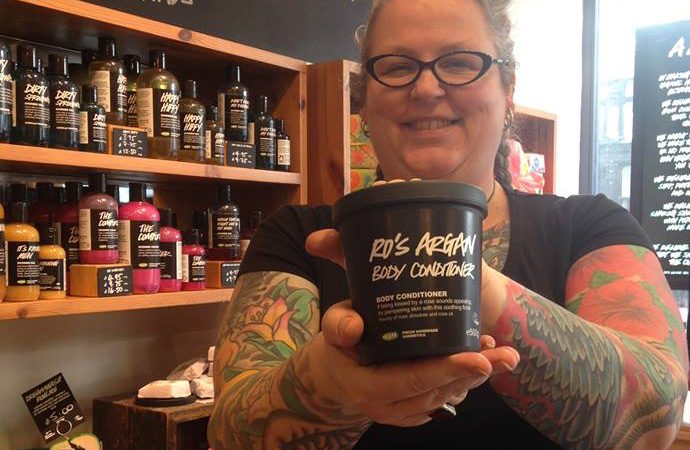 How much do you know about animal testing?

It’s something I’ve always been very aware of. It’s amazing how many supermarket own-brands are really good for not testing on animals; it seems to be the ‘big-brand’ companies that do test on animals but, yes, where possible I do search online… and shop at Lush, of course. I find everything I need in here but if I can’t I will choose a brand that has the ethics that isn’t animal testing.

What have you learnt from working for Lush?

I’ve used the products for a very long time. At the time [I applied] I had just taken a couple of years out from my last job to look after my children. When they advertised for Christmas temps – and this was, like, three years ago now – I thought, “Oh I’ll go along and see what I can do.” Because I’m an older lady, the idea of coming to retail wasn’t the most attractive thing – but it’s the ethics that make it for me. Yes, I sell soap, I’m 45 years old and I have two children, but the ethics are everything. Everything is made by hand, its fresh products are made by people that are happy to do so, and none of the ingredients are tested on animals. I love [Lush’s] passion to make sure everything is sourced ethically, fairly and responsibly. It’s just really cool.

Which product would you recommend to Lush newbies?

We’re probably best known for the bath bombs. People see them piled up, kind of like sweeties, and they are beautiful, brightly coloured and lots of fun. So I think maybe try either one of those or the bubble bars because they’re slightly different – you usually a liquid bubble bath and we have these solid bubble bars, so it’s quite a nice topsy turvy. Working for Lush is like working for Willy Wonka… if he had a bath shop!

[The bath bombs] really do feel like treats as well. They’re not just for a hint or tint of a smell – they have a scent in them and eco friendly lustre which, y’know, is made out of seaweed so it mulches down. Nothing goes into the economic system that’s going to damage it – that bit comes with the product whether you like it or not.

How do you promote that your products are free from animal testing?

Lush’s ethics flow naturally through every single product. Our fresh, natural ingredients are obviously not tested on animals – all of our products can be traced back to their natural ingredients. And none of our ‘extra’ ingredients, given to us by suppliers, are tested on animals either. A lot of people are reassured to hear you say that, so they know that bunnies and beagles don’t have to [have it tested on them]! Animal testing isn’t just about make-up, it’s about animals encountering things that they shouldn’t have to encounter in their natural lives. 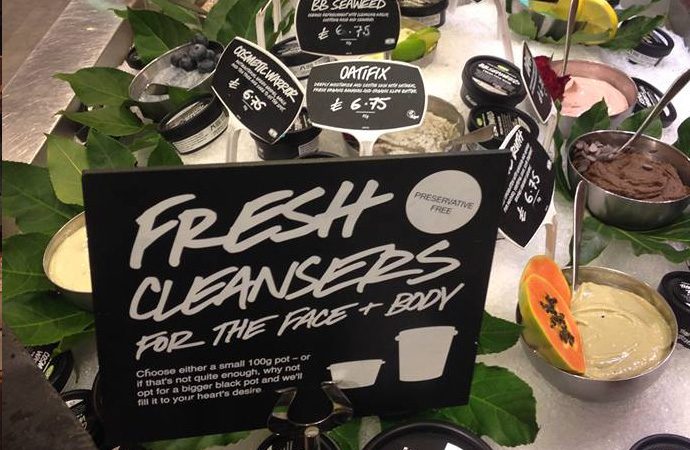 As all your products are fresh, what are the best ways to store products like bath bombs etc?

Everything in the store, apart from the Fresh table which is down there [at the back of the store], has a life span of approximately 14 months from the day it was made. You have to be wary of temperatures and humidity with the bath bombs, as if you store them in the bathroom where it’s hot and steamy, they’ll absorb all the moisture from the air, so it’s better if you store them somewhere dryer – maybe an airing cupboard or your bedroom – somewhere that’s not going to have a constant source of moisture.

The fresh face masks go in the fridge. The masks on the Fresh table were made yesterday and were delivered this morning, so they’re super, super fresh. I suppose storing Lush products is a bit like storing food – like storing your potatoes somewhere cool but dark. It’s all about making sure you pick the correct storage options based on the product. I have stuff older than 14 months and it’s still good to use, so I do.

What campaigns have Lush been involved with other than animal testing?

We had a really lovely one last year called Gay is OK. We had a special, beautiful soap and all the money from that was going to LGBTQ charities to promote the idea that love is love – it doesn’t matter who you love, where you love, that kind of thing – and the idea behind that was to help bring these issues out into the open so we could change people’s minds. At the time it was illegal in 75 countries to be gay, and by the end of the campaign it was 74 – even one country makes a difference.

We promote lots of environment-based campaigns, for example we did one last year called Mermaid’s Tears, which focused on micro beads. All the exfoliates we use in our products are natural – like ground almond shells, sea salt and sugar – all things that will either biodegrade or just mulch down to nothing. The microbeads that you find in big-brand body scrubs contain tiny little beads which, basically, fill the sea with lasting soaps.

TTIP was a really big one for us last year. TTIP is the ‘Transatlantic Trade Investment in Partnership.’ It’s basically a load of trade deals that America wants to bring over to Europe. It includes things like relaxing laws on animal testing and the kind of ingredients that you’re allowed to put in food stuff and cosmetics, as well as issues like animal welfare, because the USA doesn’t have any federal law for animal welfare. The TTIP’s idea is that, if a country’s law gets in the way of any company wanting to make profit, they can sue that government. As a brand we were particularly interested in speaking out about this. 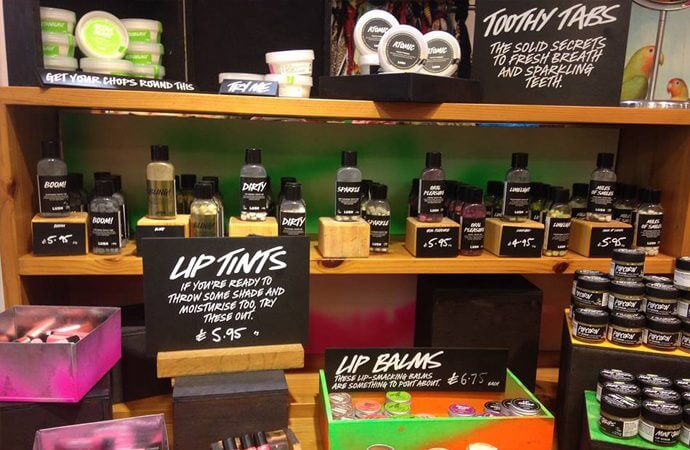 How did you feel about the campaigns?

It’s made me more politically aware again, like I was in my teens and twenties. It’s sometimes quite exhausting to be ethical in a world where there is a lot of unethical behaviour. It’s a bit like that line in The Incredibles where Mrs Incredible says, “I’ve just cleaned up this mess, do we have to do another one?!” I think that’s one of the reasons you work for Lush – because you have that ethical background and the campaigns you get involved with [are centered around] looking after the planet, the people and the animals.

So that’s just a little taster into what goes on behind the scenes at Lush and how it maintains its cruelty free philosophy. If this doesn’t sway you enough to use their products, you need your brain washed! Enjoy them… the planet certainly will!