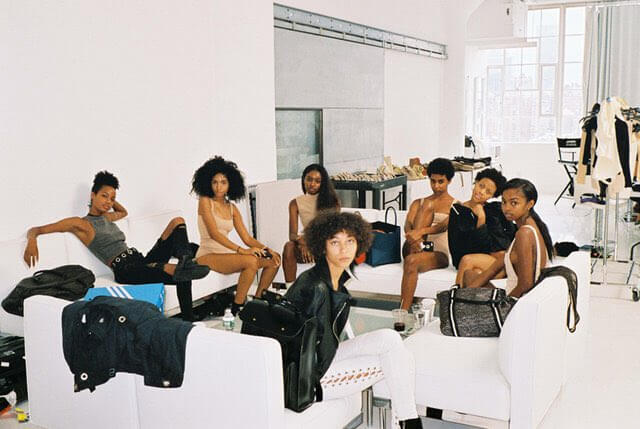 I’m going to start off by saying that I haven’t been a fan of Kanye West since 2005. Late Registration is one of my favourite albums, but that’s about as far as my interest in Kanye stretches. Anyway, I was having a Whatsapp conversation with a fellow fashion writer friend earlier and told them I had plans to stream Yeezy Season 4 tonight and then write about it. Reacting to this, she told me that she’d be doing the same because, after all, what better way to kick off Fashion Month than by watching the latest Yeezy showcase?! Honestly, I can think of many, many better ways to celebrate Fashion Month. Anything would be better than having to watch Yeezy Season 4. I got off lightly with Yeezy Season 3, as I had difficulties with the stream, but this time I couldn’t really get out of it.

Things didn’t start well as the show was pushed back from 3pm to 4pm EST – 9pm here in the UK, by which time I’ve normally drunk a few gin and tonics and switched my brain off for the night. Could I face watching rows and rows of women wearing what is, essentially, Spanx for people who won’t admit to wearing Spanx? I stuck with it, though, watching the New York skyline of the Tidal stream (which, obviously, played The Life of Pablo on loop in the background) as I waited.

I hate having to bring the Kardashians up in every fashion piece I ever write (at least it feels that way!) as I see them as a clan of vacuous, hypocritical women who blurt out words like ‘body positivity’, ’empowerment’ and ‘feminism’ before hopping into their massive cars to get butt/breast/face/everything implants, and then let their boyfriends woo them by buying them even bigger cars. Furthermore, the girls’ personal styles are all variations on the same common threads: beige, camel, latex, bodycon, anything ‘athleisure’ – yet these are the people who land Vogue covers and are hailed as style icons these days. If you want to understand why everyone hates Millenials and Gen Z-ers, guys, just look at the current sorry state of the fashion industry. However, the Kardashians are Kanye’s in-laws, so I can’t really ignore them in this instance. Sorry. Here’s the obligatory shot of Kim and Kendall arriving at the venue, looking all Spanx-y and beige.

Just before the show started, the venue details started buzzing around Twitter. It turned out that Yeezy Season 4 was to be unveiled in Roosevelt Island’s Smallpox Hospital. In case you were wondering, the former hospital is as decrepit as you’d expect, but things began to look prettier when the stream finally kicked into action. 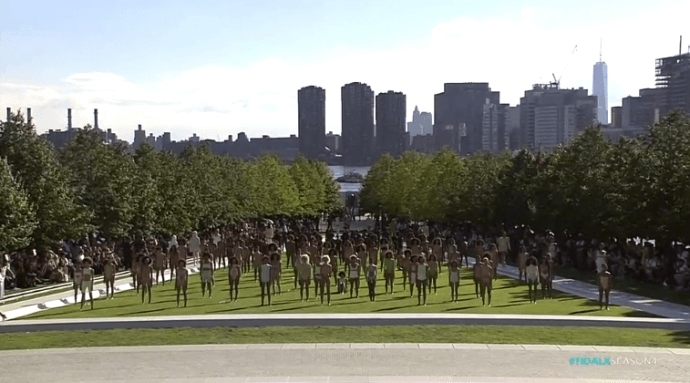 And so came a show comprising – you guessed it – stretchy clothes in shades of white, nude, beige, khaki and black. 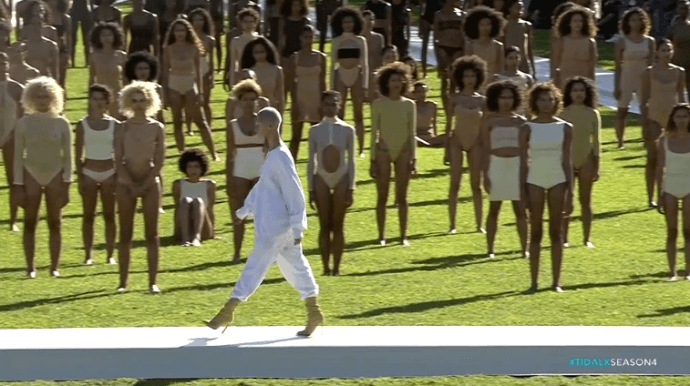 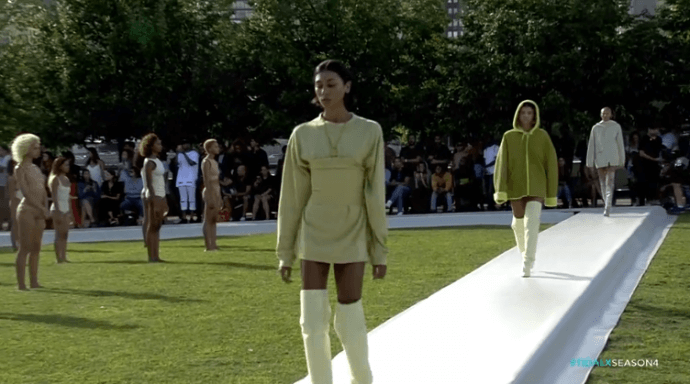 There were some loose clothes, too. And loose clothes bound in the centre with stretchy panels of fabric to add shape. For Yeezy Season 4, Kanye provided us with another sea of shapewear and bodycon and granny-pants-masquerading-as-shorts – nothing was groundbreaking, but it should be remembered that the designer behind the collection simply isn’t a designer. The man does, however, know what the cool girls are wearing, plus he’s married to Kim Kardashian, so his particular brand of sultry sportswear-meets-streetwear is the most veritable of them all. Ye’s boxy thigh-high boots, oversized sweats and nondescript utilitarian jackets served as a welcome contrast to the mass of figure-hugging garments and, instead of being a simple love letter to the female body, the collection oozed modernity. My vote goes to the few extravagant, duvet-like puffa jackets on display – they looked so appealing that I would totally be down for wearing one while strutting down the catwalk in the beaming midday sun, and they were reminiscent of pieces from Demna Gvasalia’s Balenciaga debut. They certainly weren’t the only Demna/Vetements influences I noticed in the collection. 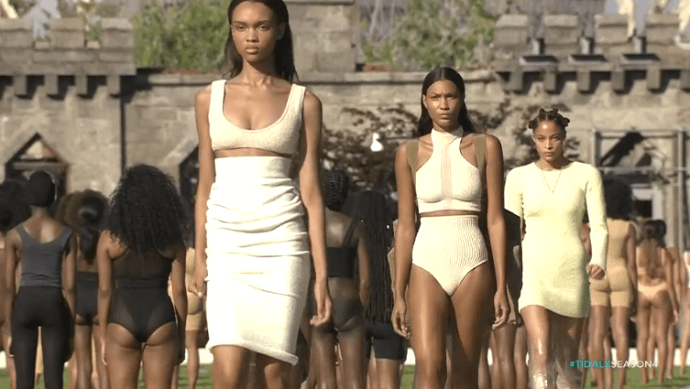 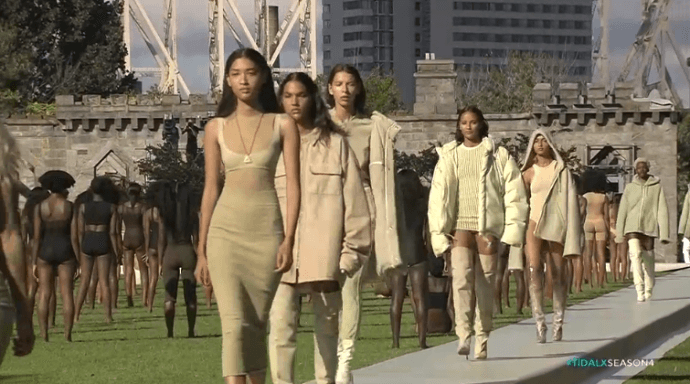 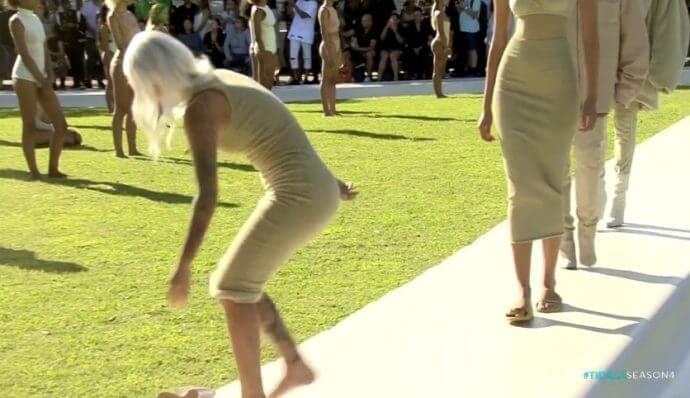 When model Amina Blue came down the catwalk she looked particularly pained, even by model standards. She wobbled and winced and the game was eventually given away when the camera panned down to Blue’s feet, which were struggling to deal with the awkward heels she’d been given to wear. She eventually thought ‘sod it’ and kicked off the torture devices in defiance, continuing to walk down the catwalk as gracefully as one can when barefoot. On a side note, a Google search reveals that Amina is only 5″1′ – at 5″3′ myself, this gives me hope that maybe I, one day, will also be part of Yeezy Season. 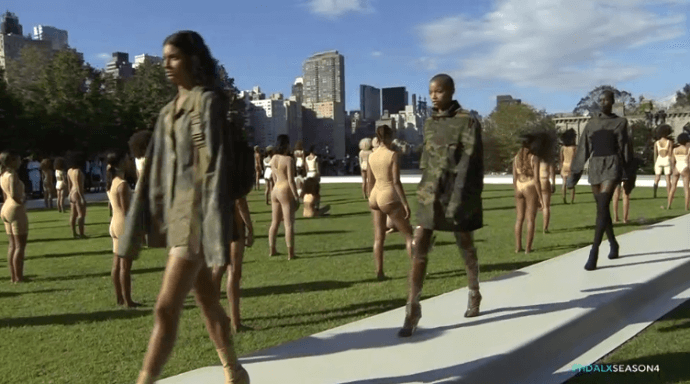 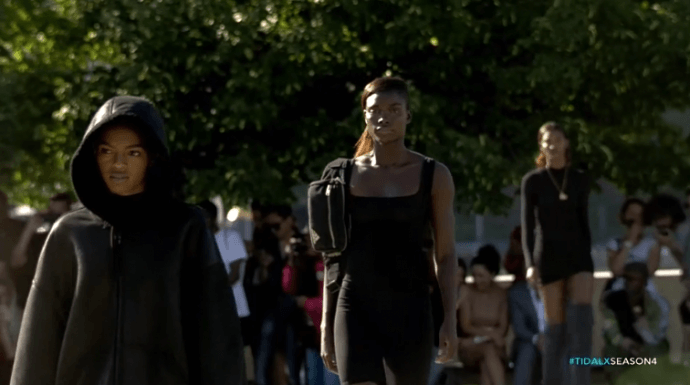 After the white and nude shades came the camo. And then the black. Yaaaaaaaas. By this point, the models in the centre of the triangular catwalk started to look a little drained. I guess there is something about standing statuesque in the midday New York heat, wearing a leotard, that would leave you feeling pretty uncomfortable after a couple of hours. 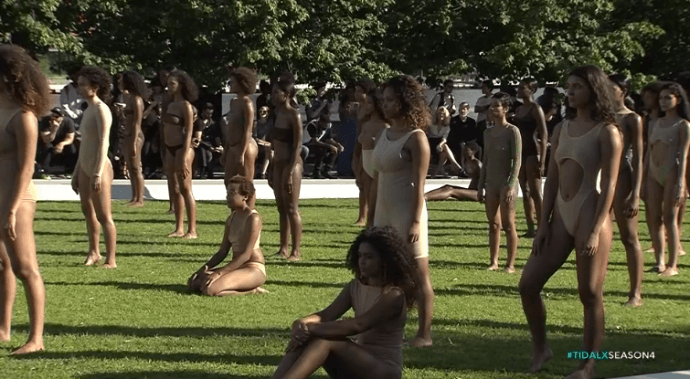 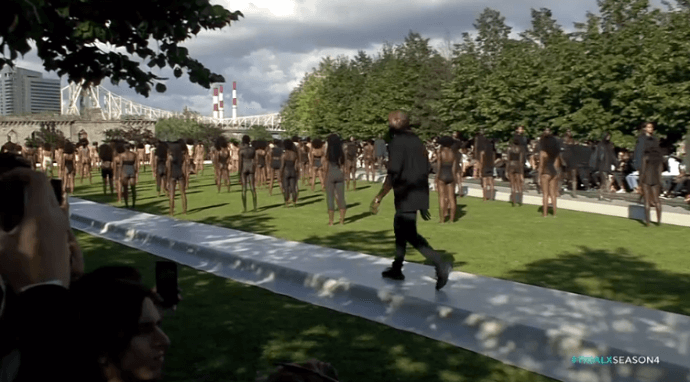 Kanye was clearly feeling the heat when he emerged for his lap of honour after the models completed their final walk. The ‘musician/producer/artist/author/designer’ (according to Tidal) couldn’t even make it all the way around the circuit, bless him, instead running up the portion of the runway covered in shade before disappearing again. You may be wearing an all-black outfit, Kanye, but what about the poor models you have just forced to stand out in the sun for several hours?

Stella Bugbee, Editorial Director of The Cut, actually attended the show, having been transported to the venue via the press-exclusive ‘Yeezy Bus‘, and she was particularly concerned for the models’ welfare. 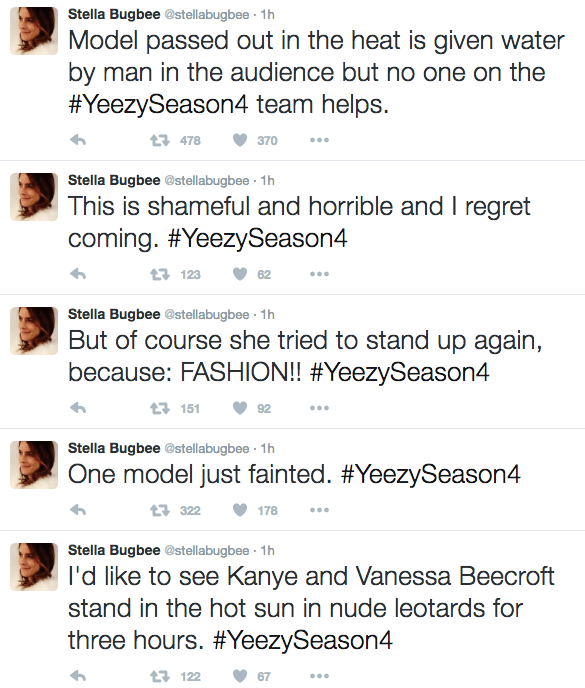 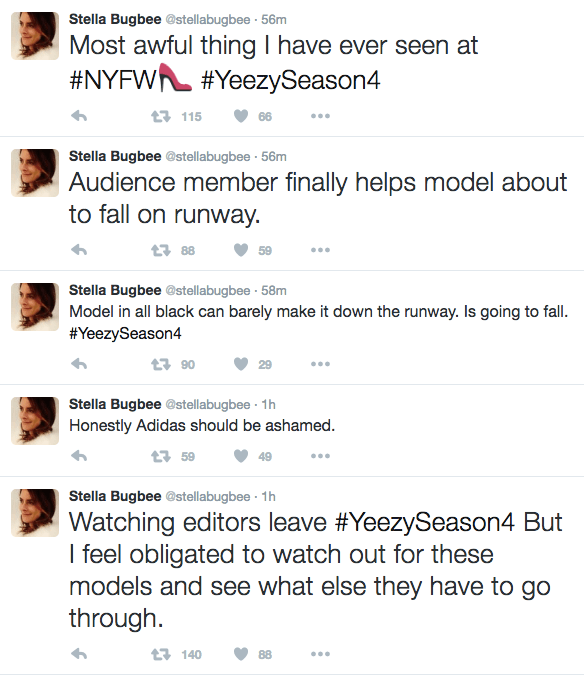 It will be interesting to see where the story goes from here. No doubt the reports from the likes of Vogue and Elle will be glowing and generous (advertiser funding, especially from huge brands like Adidas, dictates just about everything that fashion magazine staff write) but I hope to see the heat issue being addressed by the non-fashion specific media. Here’s to hoping that now everyone – from the frustrated journalists to the exhausted models to Kanye himself – will have a chance to cool down.