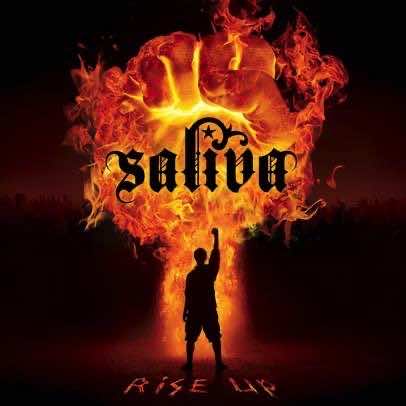 Following the departure of vocalist Joey Scott, not many people thought Saliva would be able to survive. And then entered Bobby Amaru, with his larger-than-life personality and the vocal range that is amazing. Amaru won over fans from the start.

Title track ‘Rise Up’ is very nu-metal in feeling. This really resembles Papa Roach during that ‘Time For Annihilation’ era meets old school Linkin Park in some ways. It gives us hope that this wont be the radio friendly rock we are hearing these days.

There have been a lot of comparison to Nickelback around the internet and we can see where that is coming from in ‘She Can Sure Hide Crazy’. Amaru’s vocals sound a lot like those of Chad Kroeger. ‘No One But Me’ goes back to the Papa Roach/ Nu Metal style that we know and love from Saliva.

‘Redneck Freakshow’ is one of the strongest and most memorable tracks on the album, but still manages to feel like they have just ripped off ‘Animals’ by Nickelback. With the heavy drum and vocal first verse, even the pacing just reminds me of the Nickelback track. It’s a very radio-friendly rock track that we might find our mum (those of us who are lucky enough to have cool mum’s) singing and rocking to this in the car. The only other song that stands out is ‘Closer’ which comes with a dose melodic melancholy, accompanying the powerful chorus of this ballad, which is a nice change of pace for the album.

Despite this feeling like something we’ve heard before, we still think this is a strong album. Having to replace your vocalist isn’t the easiest thing to have to do, but Saliva have really pulled it off!