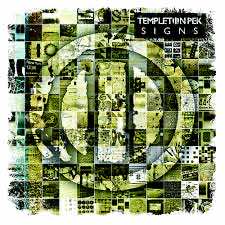 Templeton Pek are an interesting proposition. The Birmingham-based trio have spent the last five years working tirelessly and touring relentlessly, yet still remain outside the mainstream consciousness, away from widespread media attention. 2013, however, has seen them rise to new prominence, including an an extensive European tour, getting under way this week. Fourth record ‘Signs’ can only help their course.

The album opens in fine form, a chunky a riff as any found on their previous releases quickly morphing into ‘Who We Are’s jagged verse, then an expansive chorus that hearkens back to the alt-rock so popular ten years ago.

As strong a start as that was, the pace is picked up further through ‘Trial And Error’, its chiming harmonic-laden intro developing into a stomping track that, if written in 1983, could easily have been one of Motorhead‘s best tracks.

The album picks up further with ‘What Are You Waiting For’, a surprisingly complex track boasting layered guitars that are, as ever, underpinned by excellent stick-work from drummer Simon Barford.

Only by the time the band have raced through ‘Echoes’ and ‘Slow Burn’ is there time to breathe, the former ending on one of the album’s heaviest riffs, and the closing number picks up where it left off, an expansive end to a catchy, infectious album.

Neal Mitchell‘s vocals cut through an excellent mix, his range taking in the slower, more delicate moments before erupting into raw, powerful passages. Considering he makes up a third of Templeton Pek, the album sounds big, with the help of extra guitar tracks of course. Whether the material found on ‘Signs’ will leave as lasting an impression in the live environment remains to be seen, but this is a band who have played hundreds of shows, and know exactly what is expected of them.

‘Signs’ is an excellent, heads down sprint through some of the finest up-tempo rock to be released so far this year. Comparisons with bands like Funeral For A Friend are inevitable, the band’s approach on ‘Signs’ similar to that of Funeral‘s recent release ‘Conduit’, but this album does lack a little spice, that extra push to take it above their peers. It’s a great piece of work, but by no means perfect. The lasting novelty associated with them being a three-piece will carry them, but roll on release number five. Consider ‘Signs’ a statement of intent, that Templeton Pek are capable of writing excellent songs; we just need something a little more special.

In this article:Funeral for A Friend, Templeton Pek