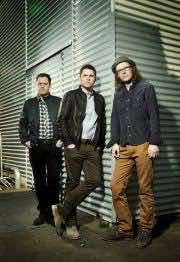 Sugary sweet pop act Scouting For Girls are set to release their latest single ‘Summertime In The City’ next month. This marks their first release in what feels like an eternity, but in actual fact it has only been 18 months.

The band gained mainstream chart success through previous albums ‘Scouting For Girls’ and ‘Everybody Wants To Be On TV’ and the success was based on a mixture of their pop-rock, mixing bubblegum lyrics, rock riffs and tuneful keys. Their latest single has been spooned from the same bowl and shows off the band at the top of their game.

The track begins much like every other with Roy tinkling the beats on his keyboard and a singalong “ohhh” that will surely be a crowd participation moment to be proud of. The track is full of the band’s usual whimsical lyrics talking of “the girls [who] dress hot” and “the boys [who] go silly”. By no means are the lyrics full of depth but they mirror everything people know and love the band for.

Let’s hope when the track is officially released the band’s words “here comes the summer” will have some truth to them.

In this article:scouting for girls