Last weekend (11th-13th July) , the woods of Noseley Hall, Leicestershire were no ordinary woods. Having been taken over by the Noisily Festival, the Noseley woods were temporarily transformed into an electronic music paradise and naturally, we felt compelled to go along and see what this was all about.

Due to a range of unfortunate circumstances, we had to arrive a day late on the Saturday which sadly meant missing a whole array of fantastic acts including my personal favourite: Atomic Drop. However, arriving on Saturday afternoon we were in high spirits having made the easy journey by coach and cab all the way from London to be greeted by beautiful countryside on a gorgeous sunny day. Although the festival camping area was packed with tents, We found a space with ease and having set up camp we took some time to chill out with a drink and take in the vibes of the camping area around us.

It immediately struck us that this festival was far different from the usual commercialised giants; small groups of people of all ages were chilling outside their tents chatting, laughing and playing music out of small stereos. Needless to say, the usual crowd of rowdy, pissed up teens and twenty-somethings were thankfully nowhere to be seen. As we chilled out with a drink we got chatting to the guy camping next to us and asked him how his weekend had been so far. He told us, with a smile on his face that he was having the best time of his life. As he said this to us, with the sound of pulsing electronic beats emerging from deep within the woods, we knew we were in for a treat.

The path to the main area was lined by tall white and purple flags which lead us to the entrance of the woods. From here the path was lined with twinkling lights and already the environment was feeling pretty special. beyond the path leading to the main entrance, giant eyes sat in amongst the trees emerging from the soil followed by large white structures which were later glowing various colours. The main track linking the stages was lined with stalls serving all kinds of interesting, tasty and reasonably priced food. 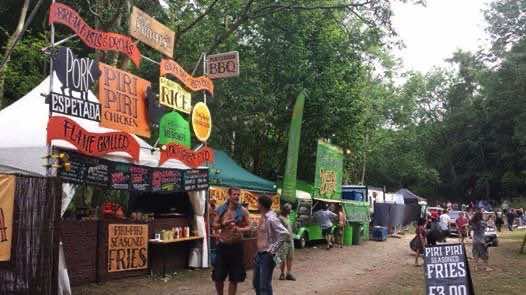 A great selection of food stalls

After fuelling ourselves for some serious dancing we moved between the various stages taking in the eclectic array of sounds from Chubba at the Treehouse Stage and Earthling at the Liquid Stage. The Liquid Stage was by far the most visually impressive. A huge green structure stretched over the ‘dance floor’ area gave this little opening in the woodland an ‘other wordly’ vibe further enhanced by the art work nestled in among trees. Although impressive in the daytime, it was even more incredible at night when the whole structure lit up and transformed the area completely. 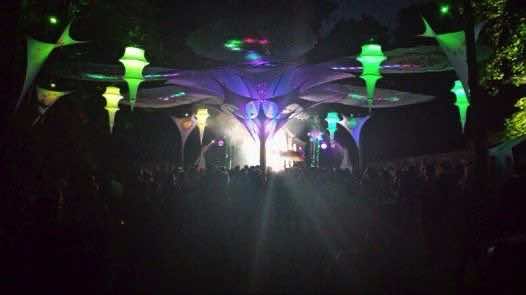 Later on that evening it was Jasper’s set at the Noisily Stage that really stood out. His set offered up elements of Psy-Trance infused with more euphoric trance elements unpinned by a great groove that couldn’t fail in keeping the crowd moving. Next up at the Noisily Stage, ANS offered up another set of great eclectic electronic beats that were seamlessly woven together. Although at times the energy dipped, it always swiftly picked back up and overall it was a high-octane set full of pulsing beats and exciting surprises.

Another great feature of the Noisily Stage area was the bar. Its position meant it was possible to grab a reasonably priced beer while still enjoying the acts on stage. In addition to this, the staff were friendly and there were no enormous queues. 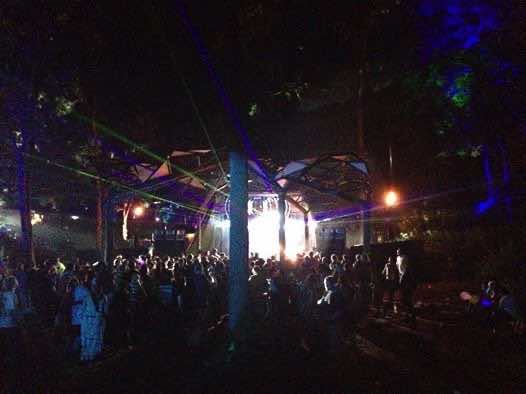 A particular highlight of the  weekend was The Argonaut Stage which really did steal the show. This little stage was formed of a metal structure in the shape of a bull’s head with a dj at its centre. The music coming from this stage was perhaps the most eclectic of the entire festival as each dj’s sets explored mixing house, trance and even elements of garage throughout the various sets. As if this wasn’t enough, the gigantic flames blasted from the horns of the bull took the atmosphere of this comparatively small stage to a whole new level.

On the Sunday at the Liquid Stage, chilled dub sounds from OTT were a welcome change to the pulsing beats of the previous night. Sitting in a sheltered ‘coffee shop’ nestled in the woods, listening to this great set slow beats, deep bass and atmospheric vocals, we felt that we would perhaps want to stay in this environment for ever. Later, the Boombox Stage was blasting out some gorgeous glitch sounds and was a great soundtrack for chilling under a canopy and enjoying some lunch. 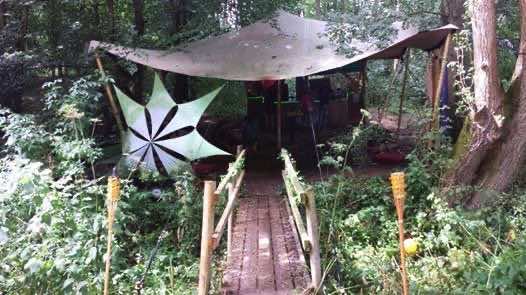 A coffee shop nestled in the trees

After this we were compelled to visit the giant spaceship again that we had previously spotted the previous night. In the darkness of Saturday night, this giant spacecraft light up around its edges and looked truly spectacular. In the daylight of Sunday, we decided to take a look inside, and upon opening the small door at the entrance to the craft, there was a kitchen area, fully equipped with kettle, oven, and pots and pans as well as miniature cereal boxes. It was weird, it was trippy and it was definitely very cute: yet another great example of the level of detail given to this festival.

We left on Sunday night feeling that we had experienced something genuinely unique. This type of festival is a rare breed in this country and it was exciting and refreshing to have discovered and experienced it. If you love electronic music then you can’t go wrong. But even if you don’t we would still recommend this festival. There is so much on offer here for such a small-scale event. There is the art, the lights, the beautiful woodland and countryside and of course, the vibe. Everyone is having a good time, some people are wasted but no one seems to cause trouble – at least not that we saw. There are plenty of toilets that you never have to queue for and they are always reasonably clean. The staff are friendly and helpful, and food and drink is reasonably priced, but of course the best thing about this festival is that you can dance and party all night. Literally. The music just keeps on going and afterwards, you can just continue back at your tent. This is a place where you can totally let go and forget your worries, where you can take a journey through the playground-like magical world full of visual treats and new experiences. So if you get a chance next summer and you are looking for somewhere great to party, go on and give the Noisily Festival a try. You won’t regret it. 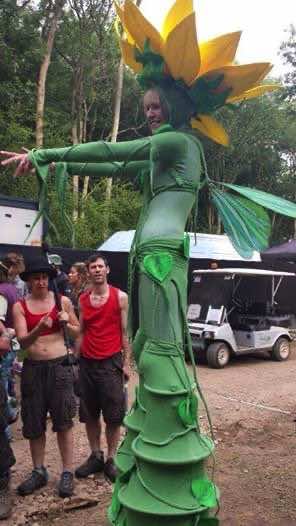 In this article:Jasper, Noisily Festival