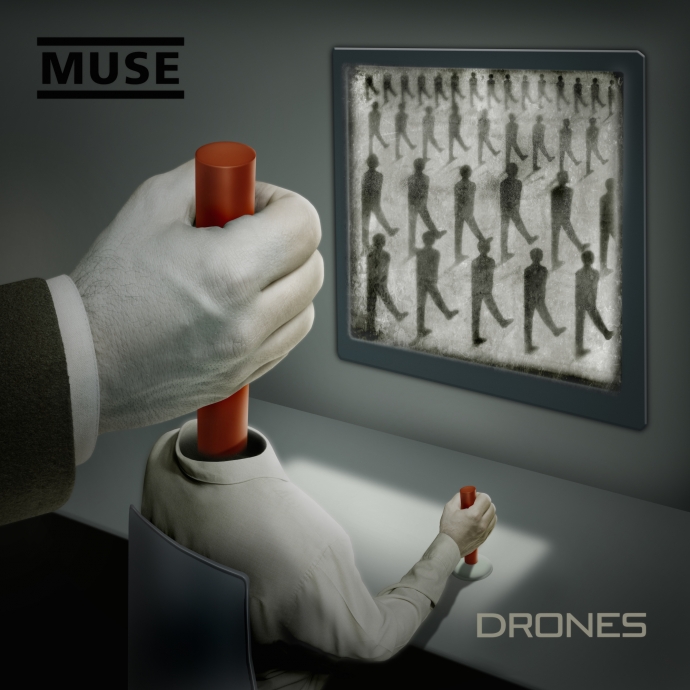 Muse has been rocking since 1994 and 21 years later, they are still as energetic as ever. Their seventh studio album, Drones, is the British rock band’s first album to place No.1 on the Billboard 200. Although nothing will compare to the timeless Black Holes and Revelations (2006), it is comforting to see that Muse has not swayed from their rock opera and proggy hard rock roots.

Drones explores themes of technological control, the potential of World War 3, and robot rebellion. It all sounds very Michael Bay. These themes are fused with roaring drums, twinkling keyboard melodies and hard-hitting and prominent guitars, exactly how we like Muse.

Drones kicks off with their first single, ‘Dead Inside,’ setting the industrial tone of the album. There are many points in the album where Muse pulls melodies and rhythms from their older stuff. The riffs and steady build of ‘Mercy’ sounds like a sequel to ‘Starlight’. ‘Mercy’ may try to be mainstream, but ‘Reaper’ is arguably the best song off the album. At points, the song sounds like an expert level song from Rock Band but its fast-paced and frenzied guitar brings a whole new energy to the album. As the album powers through, we hit the falling action with, ‘Revolt’ — a song urging you to revolt against “the man.” With soothing vocals and chorale arrangements, ‘The Globalist- Premium Only’ and ‘Drones’ act as a liberating finale to an otherwise heavy album.

Lead singer, Matthew Bellamy’s voice is full of emotion and topped with plenty of melisma and falsettos. But upon a closer listen, the lyrics are very immature. Conspiracy theories, government corruption and robots, the songs can sound very forced and, quite frankly, lame at times. The lyrics to ‘The Handler’ could be written by a moody 13-year-old wannabe anarchist “I have been programmed to obey/And now you are my handler/And I will execute your demands.”

With intense and thunderous musical composition, Drones is another epic creation by Muse. If you can forgive the somewhat juvenile lyricism and focus on the psychotic and utterly cathartic music, this album will blow your mind.