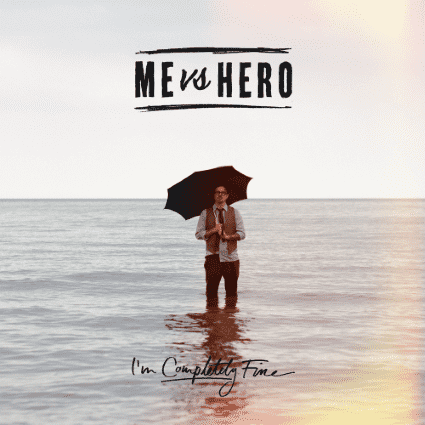 Me Vs Hero have returned to the pop-punk scene with their second album, I’m Completely Fine. While the album title might make the band sound like they’re trying to convince a therapist of their mental well-being, the actual album itself is… Well, completely fine.

Emerging pop-punk bands are huge right now, some gaining recognition quicker than ever before (Neck Deep became a pop-punk household name almost overnight this year!), and Me Vs Hero are no exception to this trend. They don’t try to hide their sound, as the brief intro track ‘I’m Completely Fine’ is short, sharp and to the point- “yes, we’re another pop-punk band, but we’re really good at it!” ‘Skin and Bones’ and ‘Marks of a Slave’ are both great examples of solid songs with just the right amount of each genre. ‘Home Alone’, however, shows the punkier side of the band coming through in quick bursts, while ‘Virtues’ has the feel-good catchiness and anthemic chorus of pop tracks. However, they do veer off the beaten track occasionally, as acoustic track ‘Hang In’ shows a more vulnerable side to Me Vs Hero, with lyrics such as “Without them, I wouldn’t be me,”melting the heart, whereas ‘Things We Know’ has a hint of post-hardcore with screaming and down-tuned guitars.

A battle between the UK and the US ensues throughout I’m Completely Fine– the band’s homegrown British roots wrestle with the American influences that spawned the pop-punk genre to create a great cross-Atlantic medley. Songs such as ‘Opposites’ and ‘Rush for Gold’ show Me Vs Hero’s British edge, with ‘Opposites’ being reminiscent of British bands like You Me At Six and Lower Than Atlantis (well, a more fun version), and ‘Rush for Gold’ reminds us of more serious UK-based rock bands, such as Deaf Havana. However, ‘Heisenberg’ is much more similar to the bouncy US pop-punk that we first became familiar with, giving us hints of New Found Glory and All Time Low.

I’m Completely Fine gives us a steady stream of pop-punk, producing a strong second album for the band and some perfect summer songs for the listener. The only let-down of I’m Completely Fine is that, by the time we’re halfway through, the songs begin to sound very, very similar, not only to each other but also to the billions of other pop-punk bands doing the rounds right now. Me Vs Hero are really going to have to pull their finger out with their live shows and future recordings if they hope to make a ripple in the ever-increasing pop-punk pond.

In this article:blackpool, Me Vs Hero, Pop Punk