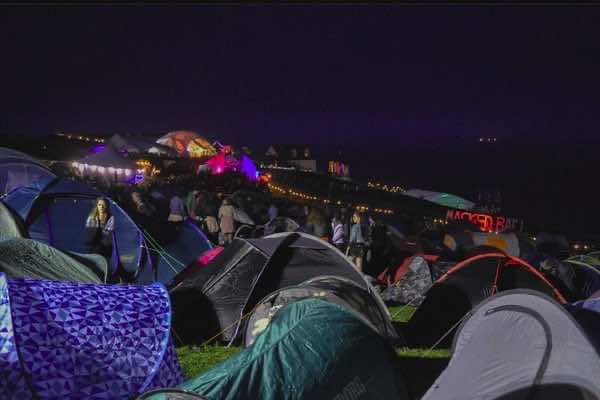 As the dust settles on last year’s Masked Ball events, a Summer ball in May and a Halloween one in October, opinions were divided among critics and crowds alike. The Summer Masked Ball received raving reviews, citing the event as “The best of the year” for many, with its unique and quirky atmosphere, amazing production and quality line-up.

The Halloween Ball however, was hit hard by what was described as “the perfect storm” and as such, partygoers suffered from torrential rain and gale-force winds. The festival was hit hard. Inaccessible car parks lead to long walks to the event and some people didn’t make it in.

As the event returns for another year, something truly spectacular had to be pulled out the bag to restore confidence. With a commitment to extra production and a more eclectic line-up featuring the likes of Groove Armada, Horse Meat Disco, Shit Robot, Rob Da Bank and DJ Format, everything was perfectly in place to reposition the event at the top end of the South West party scene.

The organisation this year had been severely ramped up, with security moved to the campsite entrance. Parking was quite a distance to walk, so we decided to break it down into two trips. It wasn’t until the second trip (with the beers) that we were turned away for “re-entry with alcohol” (despite not being advised of this beforehand and seeing other people re-enter with alcohol previously). In fact, a few members of the new security team appeared to be dysfunctional and obnoxious throughout the weekend.

The campsite itself was buzzing with excitement. One thing The Masked Ball really does attract is a great crowd. Don’t expect any egos here, as people (mostly medical students) flock in wearing more fancy dress than you can shake a stick at. With a DJ playing a fine selection of House music in the campsite itself, everyone was in good spirits for the 6pm opening of the event.

21:00 and we head towards the arenas. The layout itself appeared very disjointed and didn’t flow like last year. It was designed with safety in mind, and to keep people from moving between the arenas so frequently, but that’s part of the magic that is The Masked Ball; something it was definitely lacking this year. We saw Dreadzone at the “Alive Stage” which was in fact a giant marquee, with little character compared to the other tents. Fortunately, Dreadzone were a band that really know how to work a crowd, delivering a flawless performance.

The one tent that retained it’s character from last year without going “too big” was the Jelly Jaxx Soul Circus tent, following the same Esmerelda theme as last year. It was evident that people missed the character of last year’s Masked Ball, as the queue for this tent was solid all night. It was virtually impossible to get in, without waiting a long time. Once we got there, sets from DJ Format and Mad Mats were perfectly executed.

The stage next to the big house had been replaced with a “chilled out” VIP tent, which was quite possibly the biggest disappointment of the night. While we had VIP access, we chose to spend no time here. Last year, this area was one of the highlights of The Masked Ball, with some really talented DJs performing to one of the wildest crowds we’ve ever seen.

Midnight hits and Groove Armada were on in The Grand Ballroom. The production here had increased tenfold on last year, which perfectly accompanied the mind-blowing set Groove Armada delivered. The pinnacle moment of the entire night came when a remix of “Superstylin” was played and as the bass dropped, the whole tent transformed into pure energy. We were also treated to a few new tracks, marking Groove Armada’s return to the spotlight with a fresh, deep house vibe.

While the line-up was spot on, The Grand Ballroom‘s production was better and The Jelly Jaxx Soul Circus tent was brought back for another year, the overall magic of The Masked Ball had been lost in 2014. It was quite sad to see actually, but as every event like this grows, sometimes it’s hard to hit the mainstream without having to compromise some of the atmosphere, in favour of safety and scale.

At the Halloween Masked Ball in October and Summer Ball again next year, we can only hope that some of the exciting aspects are brought back, such as the UFO tent, the slide into “The Bunker tent” and other smaller touches that made The Masked Ball so amazing. Until then, it’s left a bit of a disappointment among the HTF team, but only because of the high precedence 2013’s event set. We feel as though The Masked Ball is still firmly positioned as one of the best events in the South West and will be for years to come.

Early Bird tickets are now available for the Halloween Masked Ball at http://maskedball.net/tickets/

In this article:Cornwall, festival, Groove Armada