As a fellow Watforder I remember a decade ago seeing Lower Than Atlantis play in their very early stages in the back rooms of pubs where most of the crowd were underage and the community centre halls which were scarily fluresant. Watford might not be the most conveniant location for some people as the London leg of their tour but as a homecoming show it was pretty special.

The crowd started off pretty sparcely as The Faim waltsed out on stage but everyone who wasn’t in the building at that time seriously missed out as the alt-rock newbies pulled out everything in their arsenal. It’s hard to believe this was their first ever tour and that they have only released two songs to the public as everything sounded so polished and well planned out. Frontman Josh Raven’s voice is very reminiscent of Brendon Urie with a full range and ability to hit the top notes as well as the deeper tones which added such depth to their performance. The Australian four piece ended with their debut single ‘Saints of the Sinners’ which pounded through the venue proving to everyone in attendance that they’re ones to watch. Milk Teeth are up next as the crowd fills into the auditorium space. Due to mental health reasons singers and bassist Becky Bloomfield has taken some much needed time out from tour but the band don’t let that bring them down as their guitar tech jumps in to help with guitar and vocal duties. Billy does an impecable job at taking over main vocal duties and tracks such as ‘Swear Jar’ and ‘Owning Your Okayness’ stand on their own even though they sound inherantly different without the contrasting vocals. Tonight we see a whole new dimension to the band with differing vocals alongside the same chaotic energy that Milk Teeth always bring to the table.

But however great the supports are this tour is all about Lower Than Atlantis and looking back on their fruitful ascent from backroom pub band down the road to stars and it’s a proud moment for any longtime fans. Eddy enters the stage and places himself behind a drum kit as he pummells the kick drum in time to strobe lighting and from this second we know it’s showtime. Opening track ‘Had Enough’ is the perfect way to open the show as the album it came from – Safe in Sound – was a Top 10 hit.

There’s a lot of banter tonight as Mike gets personal with the crowd picking out people he knows and genuinly looking happier than ever before as he looks out on the frenziness before him. Whether the crowd are longtime fans or new additions they show the band a hometown welcome with mosh pits opening up left right and centre and enough sing-a-longs you’d think you were at a Green Day show. Tonight has everything from an inflatable T-Rex being thrown around the crowd, plenty of crowd surfing and Mike jumping into the crowd guitar in arm.

Mike entered the crowd, acoustic guitar in hand and ushered the crowd to sit on the floor, something which was observed by 95% of the crowd but sadly some people just ruined it for everyone as the moment was lost and Mike headed back to the stage to swap back to a full powered electric guitar. Everyone is on top form tonight, a band who ooze musicial genius with every track they sing and there’s oldies like ‘Emily’ right through the encore closer ‘Here We Go’ which shock the ground so much we started to fear for the venues safety.

Thanks to Lower Than Atlantis Watford is on the musicial map and for that and their music we thank them.

Advertisement. Scroll to continue reading.
In this article:Lower Than Atlantis, Milk Teeth, The Faim, watford colloseum 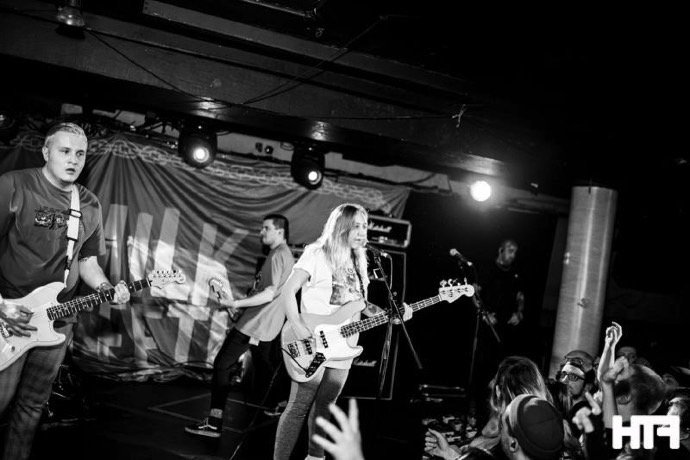 Milk Teeth's latest London show was their largest headline show to date and certainly one to remember.

We’re so excited about catching Aussie pop punkers The Faim at Slam Dunk this year. Check out our quick chat with the band’s vocalist...