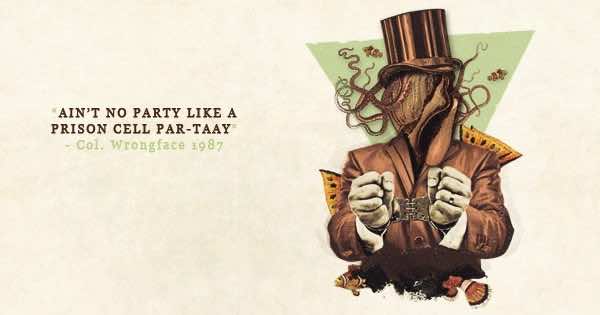 Born out of the backrooms of Bristol clubs (such as Dojos), Just Jack has gone from strength-to-strength acquiring the well deserved reputation of being one of the UK’s best promoters. As the Just Jack boys hit the acme of all that is great, celebrating their 8th birthday with an incredible line-up, launching a new label and throwing the mother of all parties in an abandoned prison, we catch up with Jethro Binns and Robin Shaw who tell us a bit about how Just Jack got to where it is today.

As we walked around Bristol in the rain trying to locate the Old Crown Courts and Prison Block where “The Lockdown”, Just Jack‘s most exciting location to date was being held, we found a small entrance where the queue trailed back about a 30 minute wait.

Jethro and Robin joined the Just Jack team 3 years ago to help cope with the increasing popularity of the Just Jack events and it was clear they belonged in the team with Tom Rio and Dan Wild, who they described as having a personality bigger than his record collection.

The core values of Just Jack were simple, serious music delivered in a silly manner. The Lockdown was no different, as they describe it:

“Roll up, roll up! Just Jack takes their emporium of oddities to the curiously wonderful cavern of iniquity that is the Old Crown Courts and Prison Cells… party like you’re on lockdown in the old court rooms and underground prison cells.”

As we entered into the courtyard and descended via a small staircase into the prison block, it was clear that this was a place we could be wondering around for hours to re-locate friends. A labrinth of craziness awaited us, from cells filled with ball pools to a Mad Hatters tea party, a “Club Tropicana” room (drinks were not free) playing insane amounts of disco and a prison tattoo area run by “local trouble starters” Shambarber.

Shambarber comes from a barbershop located in Bristol, where Tom Rio went to have his haircut and ended up in a discussion on how amazing it would be to throw a party there, streaming it live on the internet. Off the back of Just Jack’s 8th birthday a month ago, the DJs were asked if they would attend the party of about 30 people before to perform a set. The result was a success, with people tuning in from all around the world. Jethro said, “When we first started, we thought about people in the background getting wet shaves, perhaps a bit dangerous.”

It took us a while to find our way upstairs to the old courtrooms, but when we did we arrived to the sounds of Steffi, the “lady of Berlin” who comes from Berghain/Panorama Bar (often described as the best nightclub in the world) at the world’s Techno capital, Berlin. Her set was executed with perfection.

Downstairs again in Club Tropicana and Beesmunt Soundsystem were working a crowd that were clearly up for a great time, dropping their track “How I Wish”, the first release from the Just Jack music label and the highlight of the night as everyone went crazy with excitement. Judging by the reactions in the DJ box, this was clearly a pinnacle moment for Just Jack and something that will be truly remembered for years to come.

Just Jack have always booked the best DJs around from the start and grown a reputation as a result, often going out of pocket just to run a successful night. Eats Everything, Seth Troxler, Midland, Paul Woolford, Kink, Joy Orbison, Soul Clap, Mano Le Tough, Omar S, Heidi, Dixon, Jamie Jones, Josh Wink, Huxley, Bicep, Dusky, Tensnake and Maceo Plex are just some of the many artists in the past 3 years alone from the mammoth line-ups at Just Jack parties.

As the popularity of Just Jack grows, they are being asked to play events and festivals in the UK and around the world, including Love Saves The Day, Alpfresco, Secret Garden Party and the world’s number one nightclub, Space in Ibiza again this year (after successfully hosting the terrace there last year). As Robin said, “while we’re getting a lot more interest, we’re going to keep the core nights in Bristol. It’s where we can party with all our mates, and the Bristol crowd are always up for it, they know how to have a good time. You don’t get the Bristol fist pump anywhere else. We’re in a fortunate position to pick and choose what events we do now, and we’re not going to just jump into anything. We will always wait for the right things to come along.”

If you haven’t been to a Just Jack night yet, get along to one as soon as possible. They tend to sell out now pretty quick, so don’t hang around when purchasing your ticket. For more information on Just Jack and to hear more about their upcoming events, head over to their Facebook page at https://www.facebook.com/justjackhousemusic