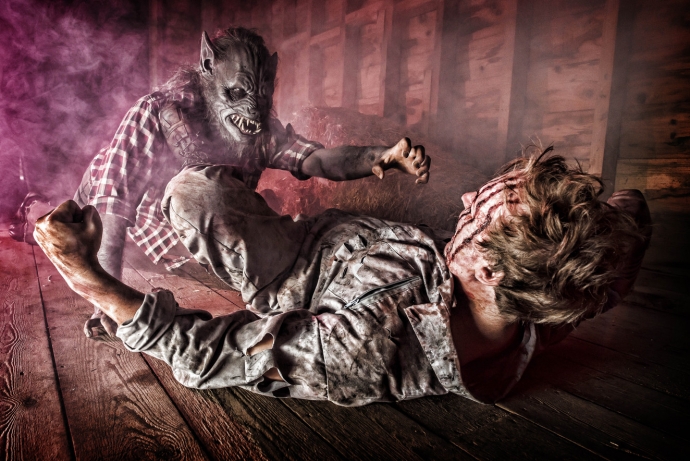 For those of you unaware of the recent phenomenon of Scream parks in the UK. There are places for those not of the faint of heart to enter a live-action haunted house or a shed filled with wielding chainsaws. Everyone’s favorite horror films brought to life. They have gained popularity in North America due to their adoration of all things Halloween and the craze spread worldwide, with one of the best in the UK being Tulley’s Shocktoberfest.

Tulley’s Shocktoberfest (based in Crawley) has been running since 2009, and their latest scream park The Howl at Mead Open Farm near Leighton Buzzard celebrated its opening night last weekend and their second year as part of Shocktoberfest, including new attractions House of Hounds and Hotel de Basquervilles.

Though smaller than Tulley Farm, which last year attracted near 60,000  customers, The Howl is an excellent way to start out. It has five haunts as well as a live band and interactive street theater characters dressed as hillbillies, un-dead school girls, and bloodthirsty clowns entertaining the queues. The first haunt was Topper’s Twister, a maze inside a clown house, not for those who have coulrophobia! After a brief audio safety announcement in small groups we were left to find the entrance and the maze is covered in brightly coloured, striped, plastic curtains and only some have actual passageways behind. While we frantically struggled to find where to go, clowns jumped out of the shadows and caused as much mischief as possible as we had to make our way through vertigo inflicting spinning tunnels and ball pits. Judging by the audio level of screams alone, the haunt was a grand success. The design and atmosphere helped create the right dynamic and a grand way to begin the park.

The Shed is hidden away are some of The Howl’s hillbilly spawn, who they prefer not to be heard or seen. During your way around the haunt, you have to walk in a single file line with hands on shoulders. Two older gentlemen seemed rather confused by the whole affair, and I had to navigate them throughout the experience, being a horror ride tour guide was unexpected, but I got the old boys to the end without them getting lost. Sadly this did distract from some lovely dirty-faced youngsters banging and screaming at us.

Onto the first new haunt – The House of Hounds. The biggest queue of the night allowed us to enjoy Grandma interacting with the punters and seeing if she could swipe some new teeth for her collection. Inside the house, the dogs have been let out and sadly there wasn’t the Baha Men to warn us. Werewolves were out to get us, leaving behind some caged humans who were begging us to release them – as if we had time for that. There were some spectacular lighting and sound effects, but the actual wolf costumes lead to a hair-raising experience. 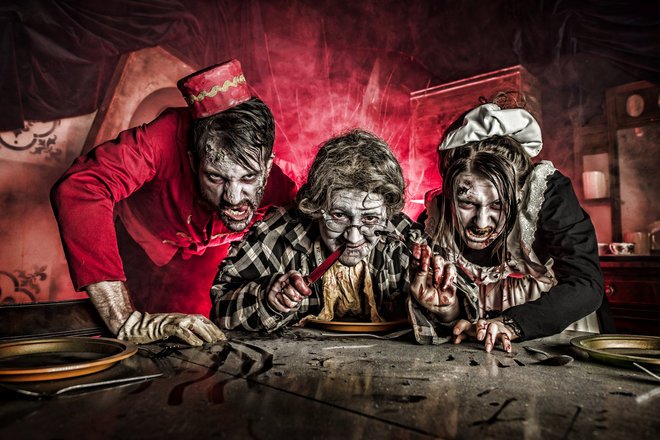 Hotel de Basquervilles was next to be paid a visit and yet another new haunt for 2016. This had the best story and acting experience. Once we were in the reception,  we were asked to wait for be served and then you are led by an angry hotelier to your room, before escaping for our lives. Great acting and places, but it did miss a few scare opportunists, surely someone jumping out from a wardrobe or a bed would have worked?

The final scare was Squealers Yard. For those lucky people who are aware of The Texas Chainsaw Massacre, this is maybe or maybe not the haunt for as the price of entry may cost you an arm and a leg. A slow burner of a haunt, the yard is relatively low-key experience, as you meet some of the friendly inhabitants who are just curious about what seasoning will go with your private parts. Some advice never looks back as these folk most certainly looked hungry.

The Howl is a great night out especially as an introduction to a world of live action fear. The park will take a couple of hours to complete, and none of the queues were any more than 15 minutes, although admittedly closer to Halloween night this may change. The presentation of the farm is less ghoulish than expected. Maybe more cobwebs and pumpkins or burning torches could mask the family farm appearance. The haunts were as fun as expected but very similar to the Crawley park. Squealers and Toppers are the best of the best, and both can be found at Tulleys Farm. They’re missing some of the more adventurous haunts that Crawley has on offer like the hayride and drive-in cinema experience. If only they could be more adult and gorier, but an age 12 certificate is sure to make sure that enough people can experience the park. For the price of admission, this is a haunted farm that will delight thousands over the Halloween period – though there are some out there who may need to get down a night light and some rubber sheets.