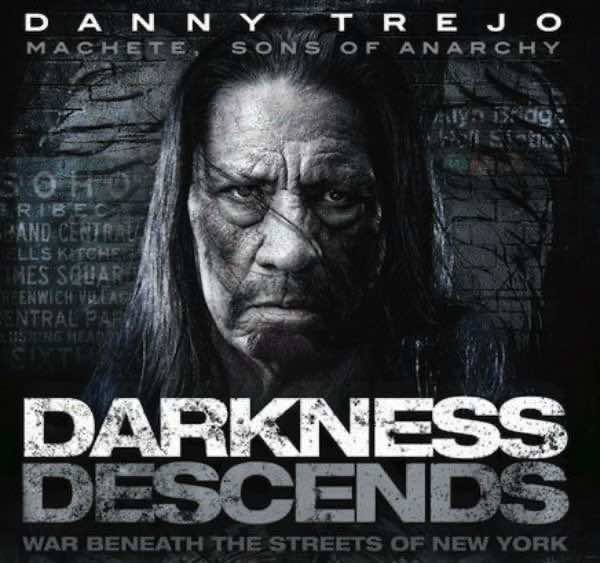 Darkness Descends captures Chelsea, a young film-maker played by Kinga Phillips, who enters the shadows of New York City’s subways to capture an underworld of crime and brutality operated by the violent and feared Angel, played by Danny Trejo.

An underbelly of society that most of us choose to ignore and a film by director Marc Clebanoff, with similar characteristics.

Phillips’ character is all too familiar – a curious sort who finds the evil in our society intriguing and gets in over her head – but nothing Phillips does makes this character her own.

The first meet between Angel, the urban legend that Chelsea is tracking down for her film, comes far too early that there almost seems to have been no time at all for Angel to truly earn his violent reputation and sinister mascaraed, This is so much so that it becomes a characterless and frustrating encounter of almost meaningless and tasteless dialogue.

Don’t get us wrong, we love it when film villains aren’t portrayed as what they are, but the problem here is that this villain is portrayed as exactly what he is, but just a toned down, un-frightening version. The eerie character of Angel is thus lost so early on and the journey of Chelsea’s character loses its intriguing edge, which we feel would have really made this film.

Characterless and dry – the film descends.

Sadly, it’s largely just the characters and the way in which they are portrayed, which ultimately gives the story very little chance to shine.

An army of the homeless lead by a violent anarchic Trejo – who would have guessed? – who are starting a revolution against the establishment with a stray cop who is also pissed off at those in command and a film maker looking to document it all. To be honest, when we first read into the film, we were quite excited.

However, without characters we can love or hate – or love to hate or hate to love – we don’t have much of a film.

Take for example, Chelsea’s line following her first encounter with Angel, “This was a very bad idea”, there is fear there, but it’s hardly convincing and this continues throughout. There’s no consistency with the character. The fear comes and goes like the common cold and as one of the films main characters, with all eyes on her for the most part of the viewing, she conveys an utterly unconvincing and deeply frustrating character.

We could sit here and pick holes at this film all day. The matter of fact is, unless you’re a die-hard Danny Trejo fanatic who wants to tick off another one of his films on your list, then that’s the only sales pitch we can give you as to why you’d want to see this film.