Once a year, the bustling cultural nexus that is Camden Town plays host to a plethora of talented musicians as part of the annual Camden Rocks festival. Hundreds of artists and bands, from up and coming talents to national stars, perform across many of the area’s iconic venues. It’s next to impossible to see every band on the bill, but here are the bands we managed to catch at this year’s festival:

After collecting our wristbands at The World’s End we headed to see our first band of the day, luckily just around the corner at The Black Heart. Empire are something of a hidden gem in the UK rock scene, having toured tirelessly since their formation in 2012 and have played pretty much every festival going while somehow staying relatively under the radar. Today they were unfortunately without a bassist due to injury, but still played a tight, hook-filled set comprised entirely of new material. Vocalist Joe Green was his usual chipper self, appealing to newcomers and old fans alike with banter and impressive vocals. To the dismay of some fans, Joe announced that they wouldn’t be playing ‘Black Hearts’ (from 2013 EP Where the World Begins) at the Black Heart, although the new material sounded good enough it didn’t matter much. Here’s hoping that debut album Glue, out in September, gives them the big break they highly deserve. 7/10

Next, we headed over to Dingwalls where Leeds-based Weekend Recovery were tearing up the venue’s small canalside bar stage. Their punky garage rock sound had drawn a surprisingly large crowd for so early in the day, meaning it was difficult to find a spot where we could actually see the band. Catchy tunes and solid riffs had everyone nodding their heads and a few singing along. Singer Lori’s vocals, though a little piercing at times, were full of fiery attitude and grabbed the attention of many passers-by who took a break from enjoying the glorious sunshine to come and watch through the windows. Despite a polarising remark about the Red Hot Chili Peppers (or maybe it helped?) the young Northerners made a great impression on the London crowd, even being called back to the stage for an encore of ‘Monster’ from their 2018 album Get What You Came For. It’s always cool to see an up and coming band get such a good reaction and we hope things continue to go well for these guys. 7/10

Moving into the main room at Dingwalls, it was now time to see Watford’s Gold Key take the stage. Formed by members of Gallows, Nervus and SikTh, the quartet only have one album to their name but their years of experience in their other bands (and vocalist/guitarist Steve Sears’ experience as a producer) shine through in their mature, polished sound reminiscent of latter-day Queens of the Stone Age and Radiohead. In contrast to the other bands we saw that day, Gold Key played a slower, more atmospheric set that included the unsettling ‘Creep in Slowly’ and the gorgeous, haunting ‘The Shape’. This created a somewhat dreamy, hypnotic mood that held the audience captive for the duration of the 30-minute set. 7/10

One of our most anticipated bands of the day, Press to MECO took to the Dingwalls stage in front of an excited crowd. They didn’t disappoint, unleashing a lively, fun set full of bouncy riffs and big choruses. Their excellent second album Here’s to the Fatigue made up most of the set, with a couple of older songs thrown in, though songs old and new were met with equal enthusiasm from the audience. A small mosh pit erupted for heavier songs such as ‘Diffusion of Responsibility’ and ‘Itchy Fingers’, with the slower-paced ‘A Place in It All’ providing a tender moment in the middle of the set. As usual, PTM’s striking mix of beautiful harmonies, catchy tunes and ridiculously heavy riffs set them apart from other bands and made them a joy to sing and dance along to. Rapturous applause from the audience confirmed our belief that PTM are a very special band that should be on everyone’s radar. 9/10

Right after Press to MECO’s set finished, we had about 5 minutes to run over to the Devonshire Arms to catch Bad Sign. Arriving to a completely packed and sweltering venue, we were just in time to witness the Croydon trio smash out some of the biggest riffs in existence. Bangers from debut album Live & Learn, such as ‘Square One’ and ‘Certitude’ reminded us why Bad Sign are one of the most promising new heavy bands in the country. Despite the intense heat and limited space there still managed to be a few brave moshers, while guitarist Jon Harris climbed onto the bar to rain riffs from above. Good old sweaty chaos, just as we like it. 8/10

For the last 15 years or so, Essex band InMe have been stalwarts of the British alternative metal scene. They’ve never quite been one of the biggest names, but since debut album Overgrown Eden in 2003 Dave McPherson and co. have maintained a dedicated fanbase and become a favourite at small festivals like Camden Rocks. On this occasion, the four-piece performed to a packed Underworld, opening with ‘Hymn: Ivory Elder’, a track from 2015 album Trilogy: Dawn, and continuing with a set spanning all six of their albums. The band’s laid-back, amiable attitude belied the technical proficiency with which they performed, and gave a glimpse into the connection between band and fans which has kept their career going strong all these years. The mammoth singalongs to classic tracks ‘Firefly’ and especially ‘Faster the Chase’created a joyous atmosphere, the kind that only exists when a few hundred people are united in the pure bliss of belting out the chorus of their favourite song. 8/10

For our final band of the evening, we made our way down Camden High Street to the iconic KOKO theatre. We arrived to find the ornate, multi-tiered venue teeming with people eager to see Glasgow’s Twin Atlantic play their first London show in over a year. We recently saw Twin play a relatively short set at Slam Dunk, so luckily for us they were given a much more fitting 75 minute set this time. This allowed for a few more gems to be squeezed into the setlist, such as the riotously riffy ‘Edit Me’ and fan favourite ‘Ex El’. Unusually for a non-headline festival set, the acoustic guitar and cello were brought out for a gorgeous rendition of ‘Crash Land’ from the band’s 2011 album Free, with singer Sam McTrusty explaining that they couldn’t resist playing it in such a beautiful venue. This turned out to be a smart move, as the audience responded with a passionate singalong which drowned out the band in places. Overall, the more intimate nature of this gig gave it a special edge that put it a notch above the Slam Dunk performance. There was an electric atmosphere in the room, culminating with a colossal finishing combo of ‘No Sleep’ and ‘Heart and Soul’. Ending on such a euphoric note left us feeling content that we had witnessed some of the country’s best musical talents, not just on this stage but throughout the day. 9/10

Check out some of our Monster Stage highlights from this years Slam Dunk Festival. 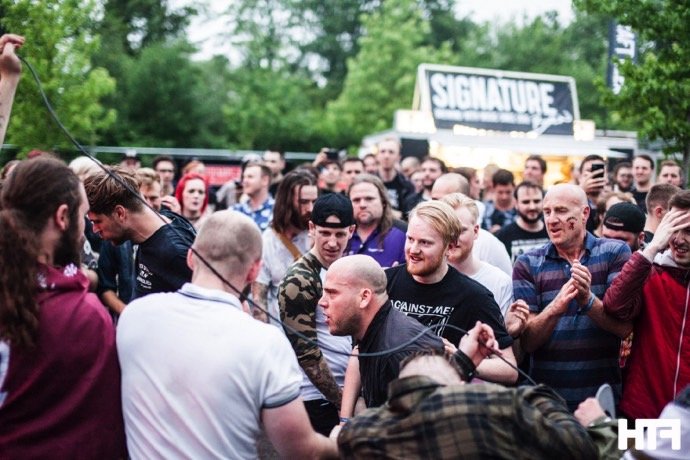 With so many amazing day festivals available out there, we think you should try to fill your summer up with as many as possible!...

Press to MECO – Here’s to the Fatigue | Album Review

The remarkable Press to MECO return in style with their sophomore album, Here's to the Fatigue. Join us as we try to wrap our... 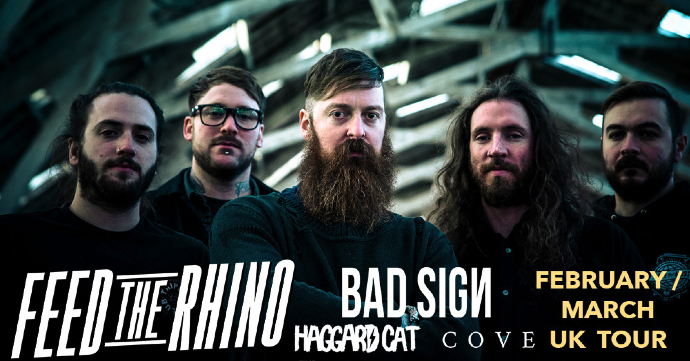 Kent's finest Feed the Rhino kicked off their tour for new album The Silence in Bristol along with an excellent bill of supports. Read...