Arkells Helped Me In The Toilet At Their Intimate London Gig! 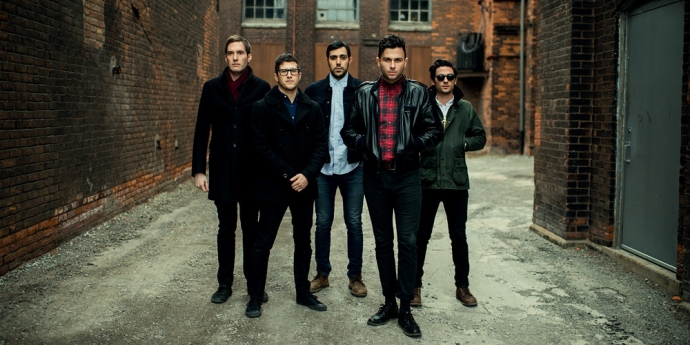 Hidden away in a small bar in London’s trendy Hoxton, is the Canadian quintet Arkells.

The band have barely made an impact in the UK but can sell out the Hoxton Square Bar & Kitchen, with some very excitable ex-pats who can’t believe they get to see their heroes play in such intimate surroundings. So close that the first time I came across a band member – bassist Nick Dika – he was helping me dry my hands in the toilets due to an over complicated hand-dryer, not because they’re all part-time toilet attendants. You wouldn’t get that type of service from The 1975.

On stage Ryan O’Reilly was struggling to perform to the chatting young audience, who seemed more enchanted by his pre-song babble than any of his well-crafted material. Some were not the most musically literate as I had to witness a group of girls “Shazaming” Fleetwood Mac’s ‘Everywhere’.

By the time Arkells had squeezed onto the stage, the audience was very well behaved and in good voice. Front man Max Kerman beamed as the band went into minimal version ‘A Little Rain’ which kept on building until Kerman was standing, neck-deep in the middle of the crowd as they sang back “doooooowwwnnnnn” at the tops of our voices… and this was just the opening song!

Throughout the night Kerman was determined to put a show that I didn’t expect for such a low-key gig. At every opportunity he would be interacting with the audience and band members, hyperactivity touching each member of the group, like heyday Robbie Williams. It was as if the gig was being beamed live across the world and the Arkells’ future lay in the balance. We all love an entertainer, but at times it did tend to become just a little bit cheesy for a cynical Brit. Especially the need for overlong introductions to songs which could be scaled back. The songs are warmly welcome, without the constant back stories. The rest of the band play-along when they have their hair ruffled or instruments tampered with, though Dika seems pleased to be out of reach due to the stage restrictions.

The set played heavily to their excellent 2016 album, Morning Report with ‘Savannah’ and ‘My Heart’s Always Yours’ sounding triumphant; though the latter was not receiving the devotion that I expected. The band are at their best the faster and harder they play. They are all exceptional musicians and on tracks like ‘Pulling Punches’ and ‘On Paper’ they are allowed to let rip. By the time the band played ‘Oh, The Boss Is Coming’ (dedicated to Trump) the confidence is sky-high, and Kerman even mocks the crowd by saying that we didn’t sing as loud as Germany, even leaving the stage until we sang loud enough for him to return to finish the song. O’Reilly was invited back on stage, looking apprehensive after the reaction to his support set, and performed a Bruce Springsteen medley that included ‘Dancing In The Dark’ and ‘Hungry Heart’ which we obviously lapped up, before they closed the set with an energised version ‘Cynical Bastards’.

For the encore, the group walked into the crowd and played an acoustic version of ‘Come To Light’ that was pretty impossible to see through the sea of smartphones filming – cheers guys! The rest of the encore was not as spoilt as we got to sing Kerman happy birthday, and “fuck off” to private school girls and boys. Of course, the big finish was ‘Leather Jacket’ which it’s chorus seemed to last until the early hours of the morning and was on repeat as I made my way back into the freezing cold London night.

A fantastic gig that sadly only a few hundred people got to witness. Hopefully, in time they will be able welcomed into the UK’s hearts as they are a band you need to watch live!