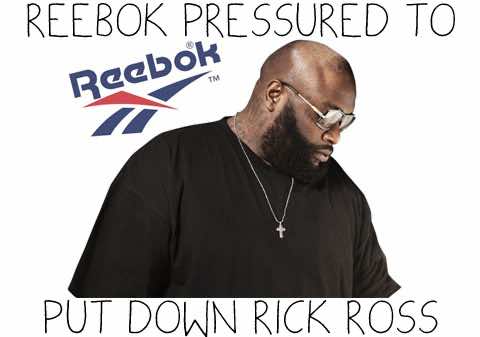 Reebok is being pressured to drop American rapper Rick Ross as its spokesperson in light of his new single, which appears to glorify date rape. In his single ‘U.O.E.N.O.,’ Ross raps about giving a woman the drug MDMA, known as Molly, and having his way with her. The lyrics in question are: ‘Put Molly all in her champagne, she ain’t even know it/I took her home and I enjoyed that. She ain’t even know it.’

A new women’s right group – UltraViolet – has collected more than 70,000 signatures on a petition demanding Reebok to drop the rapper, and they plan to deliver this petition to the Reebok’s flagship store in Manhattan. “In remaining silent, Reebok is using it’s brand to promote rape,” said Nita Chaudhary, co-founder of UltraViolet. “Reebok and Rick Ross have crossed a line.”

During a radio interview in New Orleans, the rapper said that “there was a misunderstanding with a lyric, a misinterpretation.” “I would never use the term rape in my records, in my lyrics. And as far as my camp, hip hop don’t condone that, the streets don’t condone that, nobody condones that,” he added.

However, the “misunderstanding” for Ross seems to be with the definition of rape. His comments make it seem like he doesn’t condone non-consensual forced sex, yet, for him, drugging a girl and taking her home and having sex with her unconscious body is fine.

“Glorifying rape, in any form, is not OK. This is not an abstract concern-it has real consequences,” claimed Chaudhary. “Consider the fact that the defense used by the two teenage boys convicted of rape in the Steubenville trial was that no rape occurred-that it was consensual-when the girl is seen on video unconscious to the point of having to be physically carried from place to place. Rape culture is real. And it has to stop.”

Reebok’s silence towards all these accusations is probably causing more damage than good: “Reebok spends a lot of money and time marketing to women,” said Chaudhary. ”Ask any woman how she would feel if she were drugged and woke up to find out that Rick Ross had ‘enjoyed’ her body, without her knowledgeÃ¢â‚¬” that is rape. There is no gray area. Shoe companies should not be in the rape culture business.”

In this article:Reebok, Rick Ross