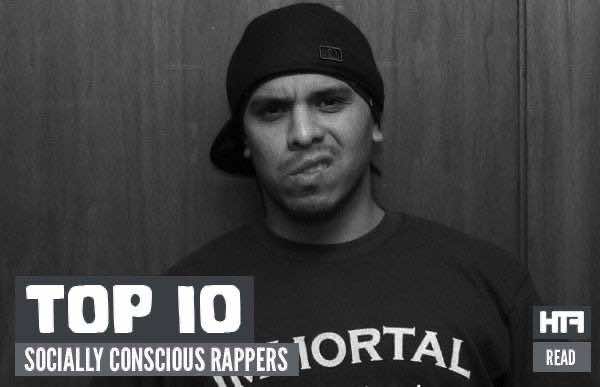 Conscious hip-hop or ‘socially conscious’ hip-hop is a sub-genre of hip-hop that challenges the dominant cultural, political, philosophical, and economic consensus. It aims to subtly inform the public of true political and social issues which are predominantly obscured by the mainstream media. Hip-hop also gives these issues a wider audience base as it is coming from music artists which are extremely popular and considered very cool. It began as something at the centre of hip-hop which was widely accepted and encouraged.

However, in more recent years it has been forced underground after the corporate machine has tightened its grip on hip-hop as a business because of its wider popularity. The fact these rappers have to be described as ‘socially conscious’ reinstates this, some of these people are even seen as outsiders by some. This is my top 10 but there are many more who have to be considered and who are not featured. I have come to this list by taking into account the substance of their messages, but of course their rapping ability as well. Enjoy!

Vincenzo Luvineri, better known as Vinnie Paz is an Italian-American rapper and the lyricist behind the Philadelphia underground hip-hop group Jedi Mind Tricks. Paz is known for his raw and gritty lyrical delivery. His lyrics frequently contain references to religion, war, politics, mythology, conspiracy theories, and the paranormal. His more recent albums such as ‘Servants in Heaven Kings in Hell’ show a more obvious approach to politics and world issues. He is a now a Muslim, and its his strong focus and criticisms of religion is predominantly why he focuses in this list, with lyrics such as; “I’m with Allah ’cause he chose me, I broke into the Vatican, strangled The Pope with his rosary.”