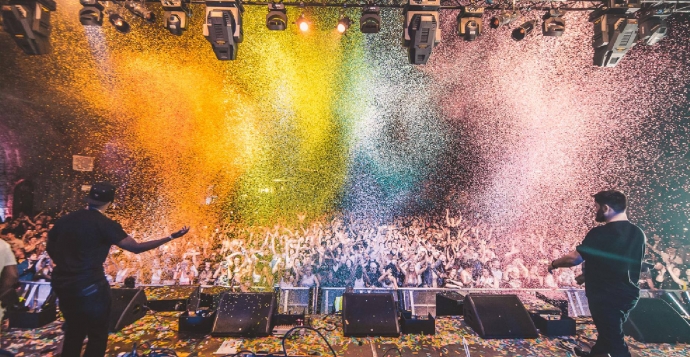 You see what we did there? Made Made Birmingham…clever, right?! “No! Get on with it”, you say? Okay.

Thousands descended on to the famous and very urban backdrop of the streets around The Rainbow Warehouse, Birmingham on Saturday along with the sunshine, for what we can only describe as one incredible party that took a break from your average amalgamation of culture, graffiti, and bass-heavy music.

As we pushed through the crowds at the entrance and the unique arrangement of various stages, we experienced an event like no other. Here are the top 5 moments that made Made Birmingham for us in 2016:

We never got a chance to stay in the basement of the Rainbow Warehouse for long, as the heat got cranked to the maximum and the tunes were equally as high as every time we passed through. Classics such as ‘Warren G – Regulate’, ‘Roots Manuva – Witness The Fitness’ and ‘Ini Kamoze – Here Comes The Hotstepper’ had the whole crowd singing.

We were at perhaps one of the busiest stages of all, “Heavy Bass Champions” when Toddla T dropped this absolute banger. Along with the live MC, spitting the lyrics, Show n Prove featuring Big Narstie‘s ‘Gas Pipe’ got one roaring reaction from the crowd, as fits went straight into the air and dropped to the beat.

We’ve seen Redlight perform a few times, and he’s been good, but not excellent. His set at Made Birmingham sent him into the excellent category as he dropped masterpieces such as this one, Justin Martin & Eats Everything – The Gettup

We don’t know why, but this song is doing the rounds again on the scene, and we love it! Sonny Fodera‘s set saw a few classics, including Crystal Water‘s ‘Gypsy Woman’, but it was when he dropped Freed From Desire by GALA that gave us a ‘goosebumps’ moment. It was on The Sunshine Terrace, above The Rainbow Warehouse. With Lavender hanging from the ceiling and a relaxing, yet party-centric atmosphere, the sun beamed down from the back to create one perfect moment as everyone raised their hands into the air and sang along.

Dusky is experimenting more and more with their sets, adding something unique every time we see them. Their incredible performance at Made Birmingham was no exception. They demonstrated a clear and expertly crafted knowledge of how to work for a crowd, as they dipped into slow, dark breakbeat tracks and then built to full blown Progressive House that took the crowd on a journey. We’ll be honest, a lot of the tracks were new, and we couldn’t identify what they were, but we heard a brilliant remix of Cajmere – Perculator which worked everyone into a frenzy! It was hot in there, but a CO2 cannon was on hand to cool everyone down as soon as the drops hit.

Made Birmingham, it was an absolute pleasure and we hope to see you next year. The Facebook Event is already live here: https://www.facebook.com/events/537901136411965/