The Greatest Song In The World Vol. 1: Say Anything – Skinny Mean Man 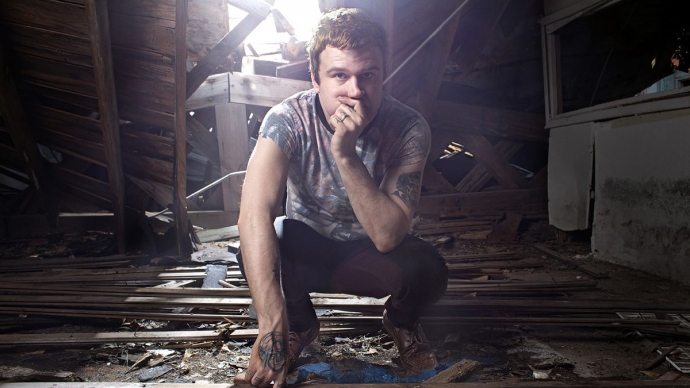 ‘Alive With The Glory Of Love’ is Say Anything’s best song, but ‘Skinny Mean Man’ is one of the best-written songs ever, and here’s proof.

‘Skinny Mean Man’ isn’t the first song about a relationship, but it is one of the rare songs to marry fantasy elements with the almost clinic accuracy of a case study. The song charts an abusive relationship from an outsider perspective. Max Bemis, singer and one-man band) watches as the woman he loves slowly has her spirited crushed by a man and is helpless to save her. Still pretty standard stuff. What makes the song unique is how direct and unpretentious the lyrics are while at the same time managing to frame an experience millions all over the world go through as a supernatural drama.

The boyfriend goes from douchey bro to literally the Devil! The woman who’s spirit is crushed literally dead, and the comeback isn’t her ‘getting her groove back’ but literally digging herself out of the earth.

We first meet the boyfriend in the intro with his voice lowered to a satanic octave.

“I know you love how I make it all go away;
all the joy, all the pain, all thoughts in your brain.
For the price of your soul, I will hold your heart in my talons.
For three summers straight you’ve been my sweet eye candy;
and no one will ever, ever, take you away from me.”

Abusive relationships are they physical or mental or both, stay your mind. The lasting effects of such a relationship rarely tend to leave the physical scars, but mental ones. An abusive partner erodes their victim’s sense of self and convinces them all the lies they use against them are the truth.

The Devil is ideal casting because as a pop culture figure he embodies all of the manipulative and seductive qualities that these type of men use on vulnerable women. The Devil also adds some much-needed drama to a subject that has honestly become rather common abuse. The idea of an abusive relationship isn’t given half the gravitas it should because it’s so common; framing it with monsters and literally life and death consequences gives it that.

In the clip, we see the police presence does nothing to alleviate Gale’s fear. The husband is no longer a threat with the police there, but that makes no difference. Physical violence isn’t the threat; her husband has a psychological hold over her.

Now the ‘melodrama’ of ‘Skinny Mean Man’ seems a lot less like ‘melodrama’ and more like sound casting. Anyone who can do this to someone ‘love’ has rejected their humanity… they are a monster.

The woman in the song is every Gale ever. Gale meekly sat in the corner needing her husband’s permission for the police to rescue her. She is clearly a shell of her former self. It’s fair to say a part of her died; this is a simile running wild. Watching Gale struggle to make a decision for her own safety, can blur the lines between the lyrical simile and actual death.

Which is where the chorus comes in: “You awake from the dirt and the grime, stretch your fractured, pretzel spine. Out to take your revenge for the crime. Filled with fire and finally, mine.”

The boyfriend destroys her spirit so much that she effectively dies. She’s dead, buried, and now she’s reborn. She drags herself out of the grave her boyfriend put her in. The song is about empowerment but not from a white knight. Max isn’t a knight in shining armour coming to rescue the helpless woman from the evil boyfriend. He only tells the story and is powerless to intervene; which is again how the song manages tip-toe on the line between both fantasy and the grim reality. Max and anyone who has been a bystander to an abusive relationship usually find themselves powerless in these situations as the abuser has a grip on their victim akin to brainwashing.

Once she finally breaks free of the boyfriend’s control, she is reborn. The end of the song is perfect too. It doesn’t end with the Max and the woman together; she’s ‘on fire. Her life ahead of her and instead of jumping from one relationship to another the song ends on her simply regaining her confidence. In 3 short minutes, we document the cruelty and eventual triumph of these relationships that typically don’t finish this way.

This song manages a weight and depth in an intense 3 minutes without ever feeling like a PSA. It’s a story. An honest one, a brutal one, and that’s why it’s one of the greatest songs in the world!