Metalheads often ridicule one another about not being “metal” enough. Cutting your long hair is not metal, wearing a colourful t-shirt is not metal, and listening to the new Drake single is almost definitely very un-metal of you. But you know what could shut them all up? A truly metal Nixon watch with a Metallica design.

It seems surprising that it took this long for a collaboration of this sort, given that Metallica have been merchandising anything they could slap a logo onto for decades now, but better late than never, right? The Metalli-watches are available for pre-order now and will be released on November 5th. Available in nine brutal designs, the watches would undoubtedly please anyone who would fall right in the middle of a Venn diagram consisting of ‘fashionable’, ‘metal’ and ‘always late’.

The designs are a bit of a mixed bag and vary greatly in price. A firm favourite will very likely be the “Ride the Lightning” design for $125, with its blue watch face (complete with lightning strikes) set against a black stainless steel strap. The seconds hand varies on some designs, but most feature the trademark barb from the band’s logo. Less popular will probably be the “Black Album” for $250 (black is metal but it’s actually impossible to see what the time is with this design) and the “Hardwired” for $125 (more of a mash of colours and not the most popular album). 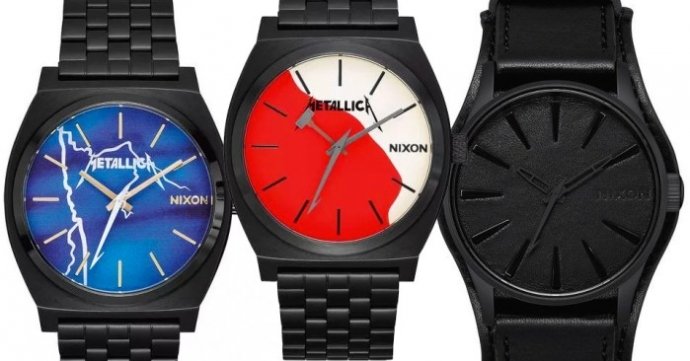 Rounding out the other watch designs are the “…And Justice For All” for $250 (average watch face but nice sword seconds hand), “Seek & Destroy” for $200 (again, average watch face but awesome Gibson Flying V seconds hand), “Master of Puppets” for $500 (watch face is a bit “busy” but might sway some fans), “Sanitarium” for $750 (this one is Limited Edition but is an ugly mess), “Kill ’em All” for $125 (simple but effective watch face and the hammer hours hand is very cool) and finally the “Pushead” for $125 (not too crazy but great metal design with the skull and spiked weapons).

The Four Horsemen are not known for cutting corners when it comes to anything they do (well, maybe with the St. Anger album), so it’s great to see some truly unique designs for these Nixon watches that reflect the band’s image, even if not all of them came out looking amazing. It’s better to go all-in rather than a half-baked scheme. Watch brand Bremont recently collaborated with the filmmakers of the upcoming Venom movie and I honestly couldn’t tell it was themed to this character even if you were waving it in front of my face. Try and guess which one it is here.*

After the Metallica watch, all you need now is the equally cool Metallica shoes from Vans, and no one will ever doubt your metalness ever again.