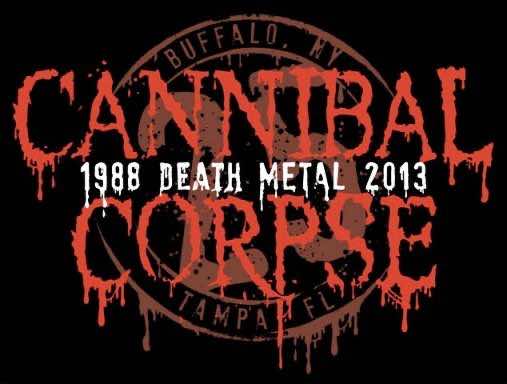 This year, Cannibal Corpse mark their 25th anniversary together as a band, and they’ve got a few special things coming out to celebrate. Their logo has had a revamp to reflect the occasion and will feature on all things Cannibal Corpse, including merchandise, throughout the year, and a special box set, which is expected to be released in March, will also be available for the biggest of fans.

That’s not all, though. Metal Blade Records will also be releasing one picture disc per month from the band’s catalogue (Eaten Back to Life, Tomb of the Mutilated and Torture to name a few). That will make a total of 12 picture discs overall, covering all of the band’s full-length studio albums, including some which have never been released on picture disc before.

Keep an eye on www.metalblade.com and www.facebook.com/CannibalCorpse for more information as the year progresses.

Make sure you catch Cannibal Corpse live on tour with DevilDriver, The Black Dahlia Murder and Winds of Plague this march. The dates are as follows: