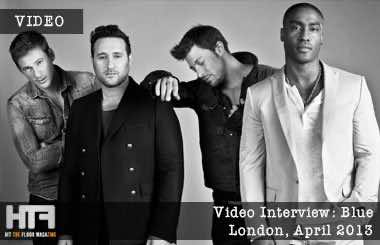 Yes you read the title correctly.. HTF were lucky enough to meet up with legendary pop band Blue recently to chat about their upcoming new album ‘Roulette’ and more. Back in the 00’s Blue were the band everyone wanted to be; their music appealed to everyone, the kids, the teenagers and the adults! This is why in 2013 they can happily ‘come back’ and plan their next take over of the UK.

Since their success on Eurovision in 2011 the band have been planning the release of their next album which had already been released in Europe. ‘Roulette’ is due for release on Monday (15th April), with the band performing a headline show in London on the 3rd May. As well as that they will doing a few dates with the Big Reunion, yes they are still on it! We speak with the whole band, in a blue room (oh the irony), in London about their upcoming plans in 2013 and we even bust out some classic ‘All Rise’ moves. No we’re not joking! Check out the full interview below.

To find out more on the band check out their official website here: www.officialblue.com