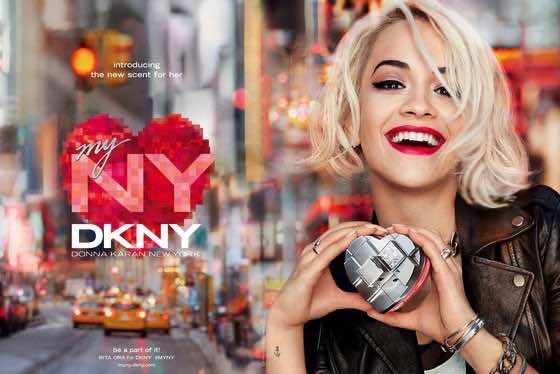 Pop singer Rita Ora has a fan, creator of DKNY, Donna Karan!  At the DKNY spring 2014 show Ora walked the runway, closing the show. She performed live at the brand’s 25th anniversary bash and also starred in a series of ads for DKNY Jeans featuring the label’s 2014 resort collection late last year. Now, she has been announced as the face of the DKNY’s newest fragrance, DKNY My NY.

Featuring top notes of raspberries, galbanum and pink pepper, the perfume will vary in price from $48 (£28) to $88 (£52), and will be available for purchase in 2,885 stores throughout the United States. A body wash and lotion will also be available in the scent.

DKNY is pulling out all the stops in promoting the upcoming scent: On top of a print campaign Ã¢â‚¬” shot by Francesco Carrozzini in the heart of Times Square Ã¢â‚¬” TV spots starring Ora as well as a digital-only campaign will launch on the 19th of August. Be prepared to see the pop star’s face and that beautiful pink heart-shaped, pink bottle everywhere you go!