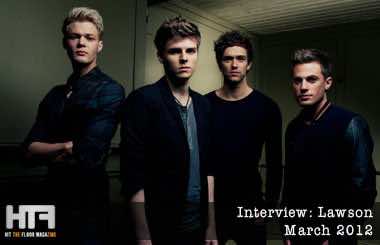 Last time we spoke to Lawson they were cooped up in the back of a van at the start of their first UK headline tour. We catch up with them to talk about just that as well as their upcoming radio tour, on the road with the one of the biggest boy bands in the UK, The Wanted, their debut album and grooming…?

Read our interview below and make sure you check out their Facebook page for tour and album details.

HTF: We spoke to you only two months ago but a lot has happened since then. How did your headline UK tour go?

Adam: It was awesome! We had a stage invasion! We were playing our last song and two girls jumped on stage and the whole crowd followed! We almost died!

Joel: It was pretty cool as we were so used to doing support slots where nobody really knows who you are and the transition between doing that and having your own show where people know all the words to the songs was incredible!

HTF: You also had a few sold out dates too. Were any of you nervous about being center of attention to a sold out crowd?

Andy: We sold out Manchester, Glasgow and London. It was pretty overwhelming. The venues only held 25 that’s why it sold out haha

Adam: We sold out in Glasgow and none of us are from or live anywhere near Scotland so to sell out was pretty big!

Earlier in the interview Joel reaches over and picks a long hair out of Andy’s stubble. I saw it but I avoided getting a restraining order! Now Andy has spotted a hair on Ryan’s neck and tries to pull it out then realised that it’s actually attached! They yanked it out anyway!

HTF: You’re about to embark on your radio tour soon, don’t you find it weird secretly performing to thousands of people sat in front of just a mic and a DJ?

Andy: Yeah it is odd, especially if there’s someone in your face with their iphone recording it!

HTF: Touring with The Wanted has been a huge leap for you guys, having new fans sing along to your songs. How has it been on the road with them? Are you good friends?

Adam: The first day was at Nottingham Arena, one of the biggest venues we ever played at. We made a few changes to the set and we didn’t have a very long sound check so we were a bit panicky but we got through it and it’s been amazing ever since!

Andy: Adam’s face was so red before we went on! We came out and he looked like a beetroot with red lines all up his neck like he overheated!

Andy: The first one was nerve-racking but since then we’ve done the O2, the MEN and they’re the biggest venues in the country!

Joel: And most of the time we’re a normal shade! Haha The O2 was funny. Before we went on we were all completely bricking it! When you do a London show there’s always a big build up with people coming down to see you!

HTF: Do you have any crazy fans that eat your hair (like Jay from The Wanted had), send you weird mail, have tattooed your names on their arm?

Ryan: We have had some strange ones. A few handing out death threats to other fans about a meeting us and we’ve read some fan fiction, which I’ve never heard of before! It’s a world where the fan/author is our best friend. ‘Just popping over to Ryan’s for a drink’ and she’ll think that’s actually happening.

Adam: They know everything about our lives and the people close to us! But that’s only a handful of fans, the rest are lovely and have been really supportive, we met some outside earlier actually!

HTF: Red Sky is out as a free download at the moment, are we going to hear any more singles before the album release?

Adam: It’s not really a single, we just threw that out there just to give people a taste and to draw people to the new website. That’s not even the album version, we’ve recorded it for the album and it sounds a hell of a lot better now. That’s if it makes it on the album! We’ve 19 completed tracks for it but we can only have 12 on the album so we have to lose some of our babies!

Andy: But the single should be out beginning of June or end of May.

Ryan: If we knew we’d tell you! We don’t even know what the first single is!

HTF: What are your summer plans?

Andy: We have a few festivals lined up but we’re not allowed to tell anyone yet! They’re all TBC.

Adam: One we can confirm is the ‘Love Luton Festival’ which is with The Wanted!

Andy: We’re doing Croke Park actually with Westlife. Will be Westlife’s last ever gig, EVER! 85, 000 people! We’re doing that with our idols actually, Jedward.

HTF: Is there anything else you’d like to add?

Adam: I would just like to apologise for the last ten minutes.

Ryan: You’re never going to get that time back and we apologise for that!