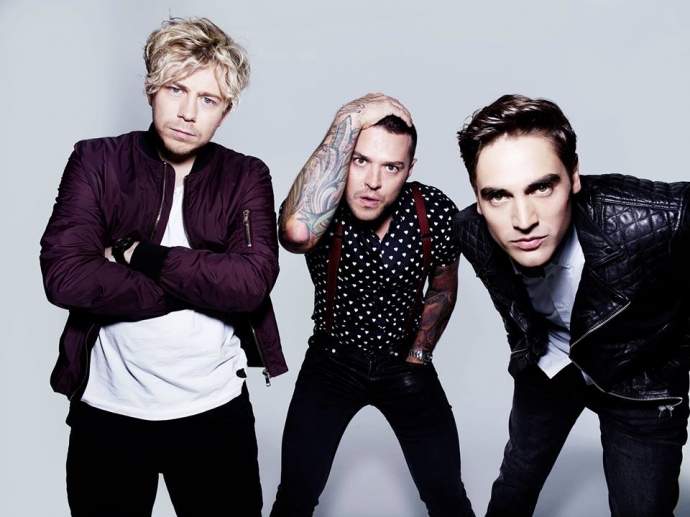 No-one really believed that it would ever happen. Busted, back together? ‘Maybe when pigs can fly!’ they said. Fast forward 12 years and a giant blow up pig can literally be seen floating above an excitable crowd at Wembley Arena, who are waiting to witness just that.

As the curtains drop on Busted‘s first show since 2004, an overwhelming wave of nostalgia (and plenty of tears, no doubt) fills the arena and opening with their new song ‘Coming Home’ feels incredibly apt. When Charlie Simpson begins to sing there are deafening cheers from all sides – the sound of childhood dreams finally coming true.

Next up comes ‘Air Hostess’ and a whole load of amazing Busted classics throughout the night including ‘Crashed The Wedding’, ‘Thunderbirds’ and ‘Sleeping With The Light On’ (with added torches from the crowd, of course). There’s even time for some unexpected fan favourites such as ‘Falling For You’, ‘Why’ and ‘Dawson’s Geek’. Although the selection of songs is brilliant, there are so many others fans hoped to hear that were missing like ‘Better Than This’ and ‘Britney’. In an ideal world they would play both albums in their entirety, but maybe that’s just us being greedy.

The trio makes time to debut some more new material during the show, namely ‘Wonderland’ and ‘Easy’. The songs, unsurprisingly, sound much more mature than the Busted we remember, boasting a dark indie-electro side to them reminiscent of The 1975 and MGMT. The tunes are a huge juxtaposition to the likes of ‘What I Go To School For’ and it almost feels like you’re watching two different bands. Whilst the Pigs Can Fly Tour has been seen as a night to reminisce for most attendees, it’s clear that Busted are also using it as a platform to relaunch the band with a new sound.

The show’s stage production has been kept to a minimum (unless you count the 100 fans huddled in pig masks behind them) and leaves room for the music to take centre stage. The three of them still sound so great together and their vocal harmonies are flawless. Their talents are stripped bare even further during a short stint on a B-stage, giving fans intimate renditions of ‘Who’s David’ and ‘Meet You There’, proving that they’ve certainly still got it.

There may well have been a 12-year gap between this Wembley show and their last, but as they play out ‘3am’ and ‘Year 3000’ during the encore to an adoring crowd, it feels like they never left. This may just be the beginning of an exciting new era for Busted.

In this article:Busted, pigs can fly, tour 2016, Wembley, wembley arena