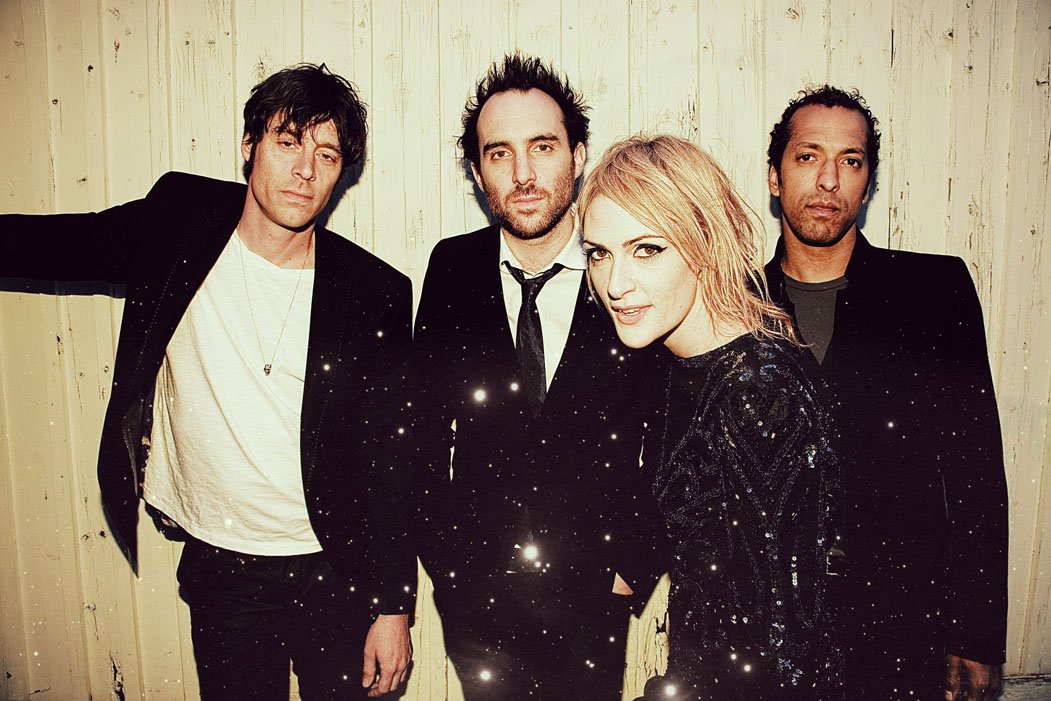 One of Canada’s fave exports, Metric, are celebrating 20 years together and the release of a new seventh album called Art of Doubt and, there is no doubt about it, it’s a bloody corker. They completed a short UK tour and HTF was lucky enough to catch the final night in London’s Kentish Forum.

Metric have been on our radar for quite some time, and we’ve enjoyed their musical shifts per album, but the latest LP has taken their finest elements and created what could be their best album to date. We would have been fools to miss out on seeing them in the flesh.

The forum was packed out with a wide variety of ex-pats and teenagers, who joined the ride when they soundtracked a Twilight movie many moons ago. The quartet came on stage at ten past 9, and the place sprang to life. A leather-clad Emily Haines was certainly excitable; she could barely keep her feet on the ground throughout their 90-minute career-spanning set.

Kicking off with Black Sheep from Scott Pilgrim vs. the World, Metric certainly seemed more ready than the audience who, apart from some Metric branded fanatics, seemed rather too subdued, compared to the frenetic energy flying out of Haines and guitarist James Shaw. Dressed to Suppress changed the mood and, aided by an impressive light show and a bass that rumbled through my bones, the audience shook off their inhibitions and began to enjoy themselves. A young boy of about 10 in a Metric t-shirt down to his knees seemed to go into a manic trance of pure affection, flinging his arms around as if no-one was watching. Sadly no-one else was able to match his hysteria.

Haines declared the show as “everything they had ever hoped for” before performing the triumphant Breathing Underwater, with the packed-out crowd singing their hearts out. Other notable highlights were Holding Out, Gold Guns Girls and Artificial Nocturne, with all but the drummer hammering away at their synths.

Metric then treated their older fans to some of their rockier mid 00’s classics, Monster Hospital and Combat Baby, allowing Shaw to do his best Lindsey Buckingham guitar solos and Haines to show off her robotic dance moves – not bad for someone nearing 45. But this show wasn’t just about them – Joshua Winstead and Joules Scott-Key got to shine throughout. It’s an achievement that Scott-Key’s thunderous drumming didn’t blow off the taped heart on his kick-drum – an enduring fixture that Emily declared is “the perfect metaphor for the love they have for us, and the love they have for the music”.

Returning to stage for the anticipated encore to showcase Art of Doubt’s finer moments. Dark Saturday and Now or Never Now are a one-two punch that any band would love to have in their locker. The latter sounded even more epic on stage than on record, and could well be one of the best tracks of the year. Sad that so many around couldn’t wait to enjoy the encore; hopefully the earlier less crowded train home was worth missing 2000 people hammering their fists in unison to the chorus of Help I’m Alive like a non-fascist Nuremberg rally. Metric, 20 years and still going strong. Here’s to another 20. They keep on lasting – much like the gaffer tape on their beating drum.