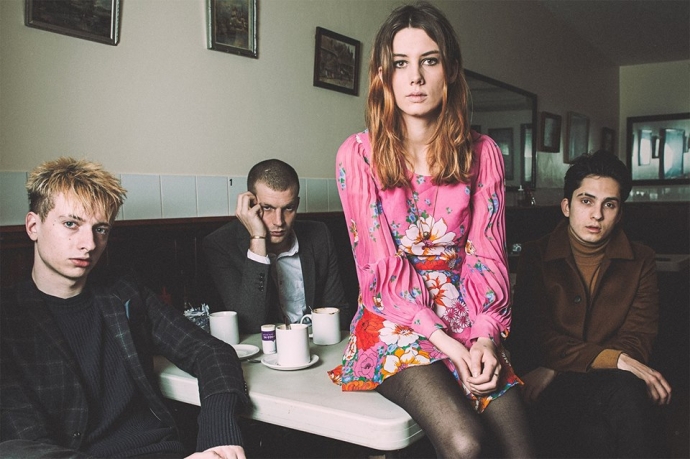 The venue was a hefty swarm of glitter-clad Wolf Alice fans, literally, so much glitter everywhere. A seemingly endless queue of fans spiralled all around the outside of the forum ranging from people who had never seen them and just came for the “bants” to a guy who had seen Wolf Alice “seven times this year”… we’re only in March!

As we began to enter the venue you could tell there was tension in the air, it was the calm before the storm. Hundreds of glittery screaming fans ran as if their life depended on it to get to the barrier, ignoring the angry “don’t run” shouts of the staff. Then came that horrible tense half an hour of waiting until the first band came on.

The first supporting act was FISH, a London four-piece with a unique and memorable distinctive grungy sound who supported US neo-psychedelic band Sunflower Bean on their UK tour earlier this year. They warmed up the audience with their dreamy and experimental tunes, which could have been compared to iconic ’90s bands such as My Bloody Valentine, Hole, Placebo and Sonic Youth. Overall, their performance was a winner with members of the crowd saying things like “we gotta see if these guys are on Soundcloud” and “holy shit they’re amazing!” Which, to put it simply, they were.

Next were the Manchester-based post-punk band, Spring King which felt like a bit of a shock after the dreamy, chilled out atmosphere FISH had created in the audience just moments before. However, Spring King truly made the audience come alive; you thought mosh pits were just for hairy heavy metal blokes? You thought wrong! Delicate, sparkly Wolf Alice fans can mosh just as hard, if not harder – as was proven during Spring King’s fist-pumping, head-banging energetic set. It was surprising the eighty-year-old venue didn’t fall to the ground! Maybe Swim Deep, but an angrier more hardcore version? Or along the lines of American avant-garde punk twins The Garden? Spring King were pretty incomparable.

Then, it was finally time for indie-rock outfit Wolf Alice to make an appearance. At the first glance of lead singer, guitarist, and indie “IT” girl Ellie Rowsell, the crowd went berserk; a huge human wave flowed through the crowd as fans scrambled eagerly to get nearer the front. Sadly,  bassist Theo Ellis was not at the show due to a “dodgy elbow.” This was a shame, however, John the replacement bassist did amazingly.

Shortly into the set came ‘Bros’, probably one of their most well-known hits, from their 2015 debut album My Love Is Cool, sending the crowd into an absolute frenzy with fans singing along to every single word and desperately reaching for their phones to Snapchat the experience. Wolf Alice also got the crowd howling with their performance of ‘You’re a Gem’; the heavy indie-rock single once again opened up the mosh pit that was previously lost after Spring King’s lively performance. During the encore, they played ‘Swallowtail’ with Rowsell‘s sublime vocals and the dreamy purple lighting on stage creating an ethereal atmosphere, as purple mist submerged the band members and the audience began to sway left to right with iPhone lights in hand. To finish, drummer Joel Amey chucked an easter egg into the crowd. The sold-out Easter Sunday show was an unforgettable one, we went in as just fans of Wolf Alice and came back unashamedly as a super-fans, complete with a shit-load of glitter that probably won’t ever wash out.