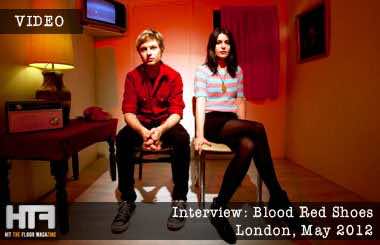 You read it in our print magazine and now you can see the whole video interview!

With an intense tour schedule booked until 2013 and a set list built to perfection, HTF’s Stephanie Stevens-Wade, was lucky enough to catch up with Blood Red Shoes‘ drummer Steven Ansell. The duo’s third album ‘In Time To Voices’  released back in March has grabbed indie music by the balls and is their strongest album to date. Armed with a darker, more mature sound Blood Red Shoes are about to embark on their most pinnacle year, stopping off at London’s ‘Heaven’ to discuss the new album, the mystery behind it and what keeps them going.

You can check out more from Blood Red Shoes here – http://www.facebook.com/bloodredshoes

In this article:Blood Red Shoes