Life should not be a journey to the grave with the intention of arriving safely in a pretty and well preserved body, but rather to skid in broadside in a cloud of smoke, thoroughly used up, totally worn out, and loudly proclaiming “Wow! What a Ride! – Hunter S. Thompson

When I first received invites to some of the Ibiza closing parties, I was on a plane heading to Burning Man in the Nevada desert. Having just turned 30 and wanting to prove to myself I “still had it”, I spontaneously booked 15 days in Ibiza, to start as soon as I returned. A severe case of ‘Fear Of Missing Out’ prompted me to jump in at the deep end, wanting to party from Carl Cox‘s last ever residency in Space to the final Space closing fiesta itself. They were so far apart that I planned on spending the days in between sat by the pool, working away under the sunshine Ibiza regularly provides.

Tuesday 20th September and I’d been up at 04:00 to travel throughout the day via some methods to eventually arrive in Ibiza, after a delayed flight, at 20:00. I was straight to the hotel, dropped my luggage off and immediately headed to Space for the last ever Carl Cox ‘Revolution’. They’d really failed at the organisation of the night. The guest lists and 2nd release tickets had been cancelled, so I was desperate to find a ticket at last minute and ended up paying double the price at €120. The queue was a two-hour process to enter.

The Carl Cox closing was everything I wanted it to be, but without the ability to enjoy it. The staff seemed sour, navigating the crowds were tough, and something about the sound in the main room wasn’t the usual perfection Space usually provides, but Carl Cox flawless, taking us on a journey of history in dance music. Meanwhile, the other rooms of Space were pumping, and it was a tough choice on where to settle. Nic Fanciulli was on fine form as always too, and with slightly fewer people packed in than the main room, it was the perfect place to settle. The next day we streamed the set again from Carl Cox to hear it in all its glory. If you couldn’t make it there, don’t feel like you missed out. Everything you needed was on the stream, without the expensive drinks, difficult crowd and inability to move!

The following day saw the Shhh! Ibiza promoters throw an after party at The Zoo Project, where Carl Cox was joined by the likes of Nic Fanciulli and more, such as Bristol based Eats Everything who flew in just for the occasion. I never made it there myself as the tickets sold out, but I’m sure it was good. I spent the day mini-detoxing, and “Feel Good Ibiza” were able to deliver some delicious recovery food to help bounce back from the heavy night before.

Thursday! Back on form and ready to party hard. Afterlife was hitting off Space, from Resident Advisor DJ competition winners, Tale Of Us. Afterlife is an incredible event, with real Techno fans in attendance. The production gets stripped back to the bare minimum, and for once, you don’t get a plethora of camera phones creating a sea of glow constantly plaguing the dance floor. The main room was partitioned to half the size, opened at about 1:30 am and called “The Chamber”, with the DJ box re-positioned to the left and the crowd partying harder than I’d ever seen at any other night in Space. At around 04:00, the night peaked, with some seriously good acidy vibes from Tale Of Us on the Sunset Terrace. The Russian goddess DJ herself, Nina Kraviz rounded off the night perfectly from 05:00 to close in room 2. 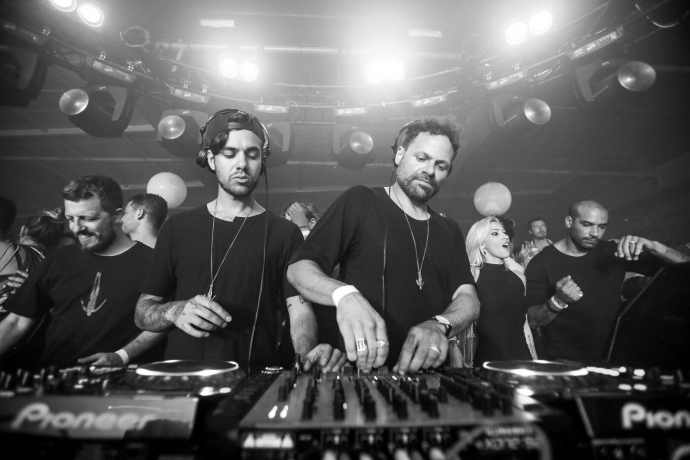 Friday was time to hit Playa D’en Bossa beach, feeling unusually fresh considering the night that had just unravelled before me! The beach was eerily quiet. Two years ago, you could walk down past the crowds of people listening to the highest quality of music, but this year the authorities had been shutting down parties in a few venues, who were discovered to be playing the music above the limits of their licence, and it had all changed. With the authorities clamping down on Ibiza’s club life in such an aggressive manner, and with Space finally closing its doors, then perhaps it’s the end of Ibiza as we know it. I certainly noticed a very different crowd here this year, and a lot of people were there purely to say ‘they were there’ as opposed to those with a real passion for Electronic music.

Saturday… Elrow closing at Space, the craziest of parties to hit Ibiza since Manumission. Debuting their new theme, “Nuevo Mundo”, the whole experience was a journey, with many describing it as if they were in the film “Avatar”. You couldn’t look in any direction without seeing something crazy happening, but you don’t need us to repeat our love for Elrow, as we have already described it before as the best club night going for having fun. Music wise, Marymoon was playing non-stop bangers on the Sunset Terrace, while the master himself, Andrea Olivia, played all night long on the Terrace, dubbed “Elrow City” where he took the crowd on an unforgettable journey of music. We saw plenty of booths around, where you could poke your head in to reveal the unexpected, but getting to them was pretty difficult! The night was as busy as the other Space closing parties, but at Elrow, that’s part of the fun! 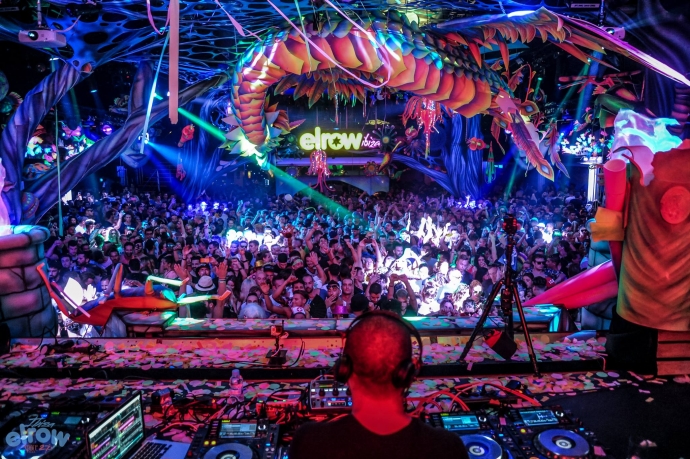 We partied hard throughout the night and were up again fresh for Sunday. Discovering “The Passion Cafe” in Playa D’en Bossa was the secret here. Smoothies of the most efficient detoxing order, coupled with wholesome, healthy and mostly vegan food for a main meal, meant our bodies were boosted back into the real world fairly quickly, ready for the Burn Residency boat party on Sunday.

The Burn Residency competition, spearheaded by Carl Cox and John Digweed saw three finalists, Ayman Awad, Lollino and Mira Joo compete for a residency at Cafe Mambo, Privilege and Sankeys with €100,000 and a management contract as the prize. I don’t want to do the others injustice, as everyone played an incredible set, but from the thousands of DJ sets I’ve seen over the past 20 years around the world, Lollino probably played one of the best I have ever heard. An incredible song selection, an ever-present cheery presence and seamless mixing left me in awe, especially as he dropped “Right On, Right On” by Silicone Soul, a perfect classic for the boat party, as the sun slowly begun it’s descent, clearing a pathway for another night of partying. We didn’t get far into the early hours of the morning this time, as Ibiza begun to take hold of our bodies. My heart yearned for “Sundays at Space”, but a mix-up with our tickets meant we ended up heading back for the hotel instead.

Monday was a day of rest and work, ready for Circoloco at DC-10 in the evening and wow, what a wild ride it was! We stayed relatively sober for the most part, which is rare for DC-10, but the music was enough to keep us going and going. We had craved a longer party on the outside Terrace before the music shut off at midnight, but as everyone flocked indoors, it became hard to move, however, the music was simply perfection. Matthew Dear was supplying beats of the finest order until our legs could no longer carry us and we departed around 04:00. A shocking performance, but we were broken people, and I still had a week ahead of me! 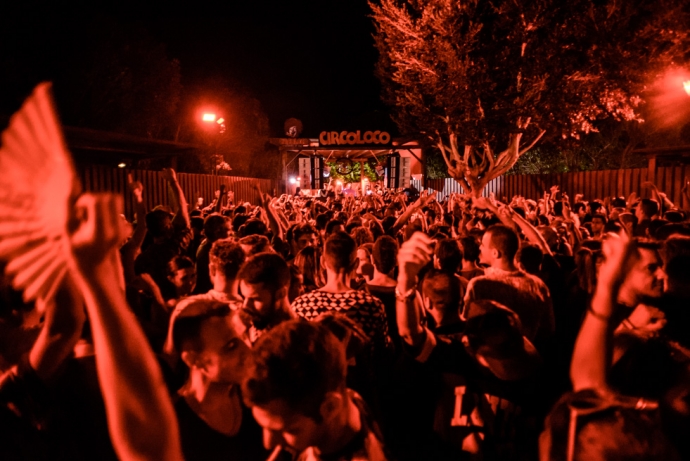 Tuesday hit and I’d been at Ibiza a week already, the longest I had ever partied there and the island had begun to take hold. I took some deep breath and questioned why I thought 15 days was ever a good idea, and especially why I thought I’d be able to pass the days by, without being persuaded into regular partying!

I’d kicked my sleeping pattern back into the regular by accident, and I found myself partying in the day instead. Nassau Beach Club was the location of choice, which saw us sipping Sangria and drinking wine daily until the weekend hit. My mind was dizzy from the week before and constant debauchery, but I needed to prepare myself for the Space closing fiesta, which was touted to be the biggest party Space had ever seen!

Saturday arrived, and Ushuaia was closing. The Martinez Brothers, Seth Troxler, Andrea Olivia and more were the flavour of the day here, and they made sure the place was rocking from start to finish with all sorts of genres explored, from Techno to Tech House, Disco to Funky House and even a touch of Reggae! The crowd were up for it and in for the music, the production was spot on and other than Elrow, I preferred it to any of the other nights at Space, which I would have never even thought about saying during the previous years I’d been.

Sunday was the Space closing fiesta, and it was 16:00 as people queued and made their way in through the entrance. With our apartment being located merely a few metres from Space, we eagerly watched and heard from people we knew in the queue, while we streamed the music feed live to our speaker system. The reports we heard back were nothing but negative. Four hours of queuing, and when inside, impossible to even move! Plus, they were charging €100 to get in. Despite heading out to Ibiza purely for Space (and Carl Cox) closing Fiesta, we decided not to go. The stream was enough for us, with the music reminding us of what an incredible club Space had been over the past 27 years. The history of dance reigned supreme, and we were very emotional as people left at 12:00 the next day, wide-eyed but with weak bodies.

In conclusion, the Space closing parties were a big disappointment in attendance, but the music more than made up for it. Providing some of the best sets ever played by DJs, as they poured their heart and soul into the club that had made part of dance music history, and affected many of our lives in very profound ways. If you stayed at home and listened to the streams alone, then you did not miss out.

Until next time Ibiza, once again, it’s been a pleasure.