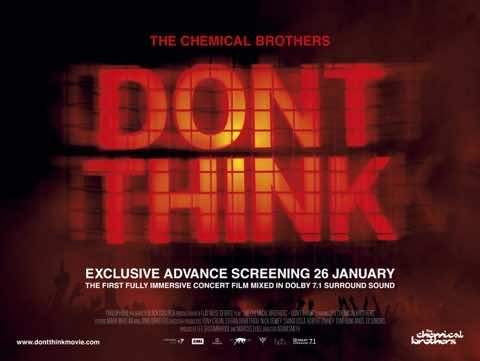 “An astonishing, celluloid rush of blood to the head.” The Sunday Telegraph

“The cinematic event of the decade” Mixmag *****

Highly anticipated concert event “The Chemical Brothers: Don’t Think” will be hitting selected U.K cinemas for one night only! On Friday 3rd February. Directed by the bands long time visual collaborator Adam Smith, this captures for the first time on film, the duo performing live. Having being filmed at Japan’s ‘Fujirock Festival’ back in July 2011 with 20 cameras and 50,000 fans, this is set to be an amazing visual experience for all.

To purchase your ticket for this jaw dropping event hit the below links:

In this article:electronic, The Chemical Brothers