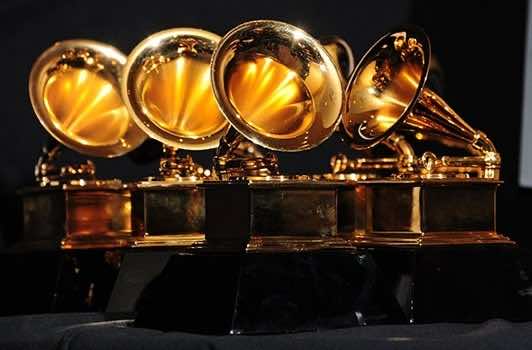 So the pinnacle of all the music award shows, The Grammy Awards 2013, has been and gone in a flash. Behaving much like a musical hurricane in it’s a wake lay a multitude of tears, tweets and tits (Katy Perrys to be specific). This year marked the 55th anniversary of its establishment and saw a few mini-controversies to go with it.

This year we witnessed Gotye going home with an astounding 3 awards, with Frank Ocean receiving only 2 of his plentiful nominations and Jay-Z & Kanye clearing up in all the Rap categories. The Black Keys really outdid themselves this year with 3 awards and fun. ran home with not only ‘Best New Artist‘ but also ‘Song Of The Year’ (take that Carly Rae).

The highly fought after title of ‘Album Of The Year’ went to good ol’ British boys Mumford & Sons who were given the award by fellow British babe and last years winner Adele.

Aside from the actual awards the Grammys bought with it: Taylor Swift’s beyond terrible audience dancing, the Marley brothers performing with Rhianna as a tribute to their late father and Jay-Z recking The Dream in his acceptance speech, for his “Swap meet” hat (catch it here) .

Overall not a particularly exciting year at the awards aside from the Brown Vs. Ocean anticipation (no one punched anyone). This is especially true for Justin Bieber who, after feeling snubbed for not being nominated for anything decided to boycott the awards. Instead hosting his own online stream to battle it out for viewers. Alas sadly for the teen heart throb, his stream crashed due to demand and could not be fixed leaving him lonely and grammy-less (cry me a river, o wait, wrong Justin).

Skrillex managed to bag himself 2 (too many) awards, rinsing the dance/electronic section of the evening to the loss of the other nominees such as Avicii, Swedish House Mafia, Steve Aoki and The Chemical Brothers.

An honorable mention has to go to Jennifer Lopez’s thigh for making an appearance against the strict new dress-code as well as Mad Decent’s Riff Raff, for just looking largely ridiculous as ever. Props also have to go to Steve Aoki for his beautifully long and shiny hair putting to shame all the expensive wigs/weaves/extensions that rolled along the red carpet tonight.

Check out the full list of winners and Frank Ocean’s touching performance of ‘Forest Gump‘ below:

Record Of The Year: Gotye – Somebody That I Used To Know

Song Of The Year: fun.- We Are Young

Producer Of The Year, Non-Classical: Dan Auerbach (The Black Keys)

Best Pop Duo/Group Performance: Gotye, featuring Kimbra – Somebody That I Used To Know

Best Hard Rock/Metal Performance: Halestorm – Love Bites (So Do I)