After just releasing their debut album ‘The First One’ featuring a staggering 172 musicians from across the planet – yup, you read that correctly – former Fandangle Bassist Andy Baker‘s ‘Andy B & The World’ project has now released their first “core band” track by the name of ‘Postcards To Montreux’. As well as that, comes news of a brand new “core band” album AND a follow up collaboration album which we have been told looks to exceed what the first one achieved. Exciting stuff!

Talking about the track and the albums Andy B said:

“After putting out “The First One” in January 2021, our 172-musician collaborative Ska/Punk/Folk album, we realised that to play shows, we’d need a core band..

..and once our core band started meeting up, we knew we had a fab group that would work so well together.

So, we decided that as well as working on the second collaboration album, we’d do our own release too, something to call our own as a core band – “Andy B Minus The World”, if you will.. which will come out on Pookout Records in a few months.”

Speaking to HTF, Andy also revealed a bit more of what to expect from this album:

“So, with our collab albums focusing on the state of the world – be it via politics, mental health or social issues – via the voices of the many performers joining in, we thought it would be nice for this non-collaborative, core-band release to be much more personal. Whilst in some of the songs I’ve opened up about my own mental health, my anxiety and so on, in “Postcards” it was just an experience of mine from a time lost to time – but I’m a believer that it’s important to just go for things in life sometimes, irrespective of the outcome and that’s really what the song’s message is about”

News of the second collaboration album was shared on their socials.. 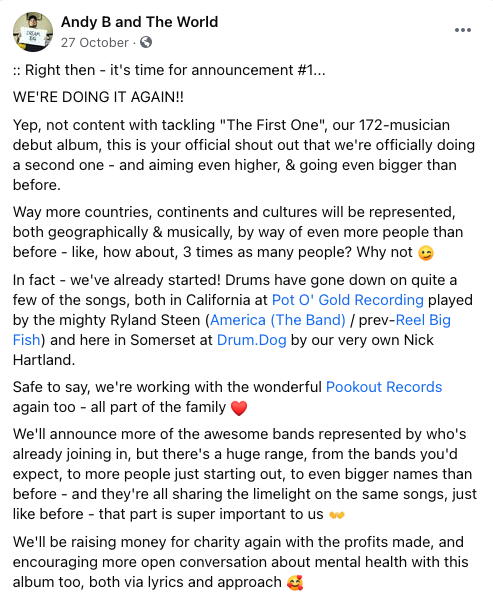 The band also recently performed their first ever live shows starting with the album release at London’s New Cross Inn and then appearing at ‘Specialized The Big One’ Festival. If you missed out on these though you have one more chance to catch up this year on Dec 11th at the Pookout Records Christmas Party at B2, Norwich alongside Faintest Idea, Roshambo, Where’s Babylon and Foreign Beer

With Andy also letting HTF in on some of the secret future plans for the project, we can assure you that you don’t wanna miss what’s coming up. This is one band to keep your eyes glued to in 2022!

If you haven’t already make sure to pick up the 172 musician masterpiece that is ‘The First One’ available right here!

POSTCARDS FROM MONTREUX LYRICS:
Just one meeting in a decade and before you even know
A generation passed and soon enough we had to go
Hazed memories of high fives lasting on as life continues on it’s ride

Lake Geneva helps me sleep when the storms are raging
The glassy water looking back when the times they are a-changin’
And change they do time and time again over and over
But still my happy place remains sat where I laid down my headphones
Where Freddie punches the sky he hears the song he starts the war cry
His heart out on his sleeve where it proudly deserves to be
If we learn one thing from the times when the mind is stressed and restless
We don’t bounce back from the big falls we just get used to their presence.

In this article:Andy B & The World