It has almost been a decade since Robert Rodriguez and Frank Miller’s original Sin City. Since then there have been a lot of rumours about a sequel to this film and it is finally coming to the theatres. Sin City: A Dame To Kill For will finally be upon viewers this year and to make Sin City fans excited, producers have released some new pictures.

Jessica Alba is back as “exotic dancer” Nancy Callahan, who on this evidence is still “exotic dancing” at Kadie’s Bar. She’ll appear in the episode ‘The Fat Loss’, set after the last film’s ‘That Yellow Bastard’.

New to the Sin City sequel and to the monochrome digital ‘cartoonification’ process is Joseph Gordon-Levitt. He’ll appear in the segment ‘The Long Bad Night’ playing Johnny, a cocky gambler who wins a game with the wrong opponent.

And once again we have Mickey Rourke as Marv. The title story will see him pitted against femme fatale Ava Lord (Eva Green) and teamed up with private eye Dwight McCarthy (Clive Owen and Josh Brolin). 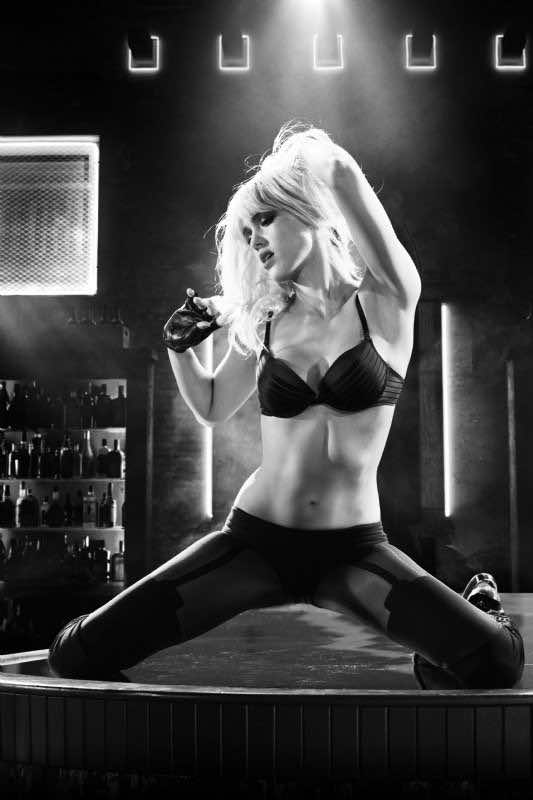 Frank Miller and Robert Rodriguez will be co-directing to create and outstanding sequel to Sin City. Also returning are Bruce Willis as Detective John Hartigan, Rosario Dawson as Gail and Jamie King as Goldie and Wendy. Further new faces include Ray Liotta and Jeremy Piven, with Dennis Haysbert inheriting the role of Manute from the late Michael Clarke Duncan.