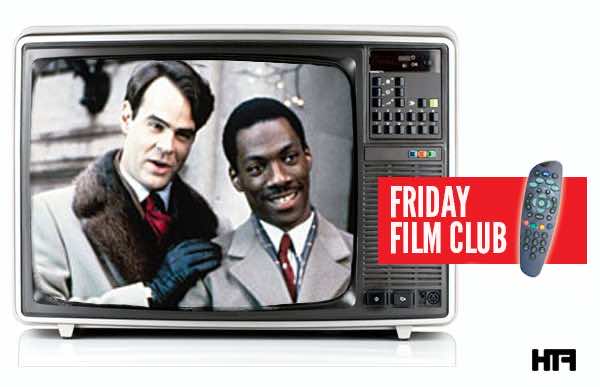 Yule tide greetings from the Friday Film Club. Less than two weeks until Xmas day and only two more Fridays to get Christmassy with tele films. If you haven’t noticed already, the surge that is terrible Christmas filler movies, we’ll direct you to the good ones.

If you’re not big on Christmas, how about birthdays? David Fincher’s ‘The Game‘ is on ITV4 9pm. Michael Douglas receives a big surprise for his birthday which sees him become the pawn in the ultimate reality shifting game.

One of the top runners up for our Top Ten Christmas Films is being shown tonight and it is really a brilliant film. Nominated for Oscars and winner of two BAFTAs is the Dan Akroyd/Eddie Murphy Comedy ‘Trading Places’ Film4 9pm

The Duke brothers are bored over the Christmas period and so, as all multi-millionaires do, place a bet. To discover the merit of nature over nurture, they take one of their rich, pampered employees, Louis Winthorpe III (Akroyd), and put him out on the street. At the same time they give his old job to street smart crook Billy Ray Valentine (Murphy).

Forced out of their comfort zones, we see the empirical rise and fall of two very differing characters. Murphy lives the life of luxury while Akroyd is reduced to crashing the firm’s Christmas party, drunk out of his head, to get violent revenge. Here’s when we see the goodness in people that money can’t buy as the two manipulated men take their own action to come out on top.

Directed by John Landis, a long time collaborator of Akroyd, ‘Trading Places’ is a moral story of being right to others. When the initial switch happens, we are happy to see Winthorpe III fail. The two characters are getting what they deserve. But on seeing the pit that he falls into, the change in character that Akroyd acts so brilliantly, we as an audience feel such sorrow for the man. And we take pride when Valentine has the opportunity to help him and does.

A tale of being right by one’s brother. ‘Trading Places’ has a very poignant message over the Christmas holidays. An ousting of money in favour of being a good person.