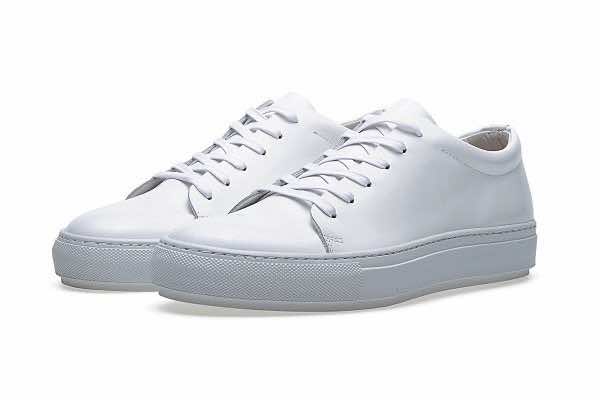 As spring draws closer, with it bringing a new and refreshing colour palette that showcases less is more, and the colour of choice being white to cleanse the cold season. It should come as no surprise, when Footwear News reported that the all-white sneaker will be the ‘it’ item and look for 2014 globally.

Dick Johnson, EVP and COO of New York based Foot Locker Inc stated: ”[The look] has always been around from a classics standpoint. It spikes up and then settles to a base level, but we’re definitely approaching a spike.”

Confirming Johnson’s statement is Isiah Bond, the men’s buyer at Boston-based streetwear retailer and e-tailer Karmaloop:” There’s a huge pulse of court styles coming back in original colourways. With technical [product trending], everything got loud overnight. It’s good to see things toned back down.”

The spring 2014 couture runways featured athletic-inspired looks from Chanel and Christian Dior leading the race; as well Saint Laurent‘s Hedi Slimane  who joined the runway race and opted for Sports Luxe take on some classic retro pieces and sealing the win with Givenchy‘s Riccardo Tisci collaborating with  Nike, which is set to launch in March.

Super bloggers have come out and declared their love for the trainer trend as well. “Where once the front row at fashion week would be a line of stilettos, over recent years trainers have become one of the most coveted high-fashion items,” said blogger Stephanie Unter of New York Fashion Hunter.

She concluded her statement simply by adding that fashion is ready to embrace the minimalism of the classic all white style: “The past few years have seen a wave of eccentric neon runners, but 2014 is the year of the classic trainer. After the crash of the wedge sneaker, inevitably there would be a backlash toward something more clean, and [trainers] seem to be the hot number right now.”

One of fashions sports giants, Adidas have seized this opportunity by bringing back its iconic Stan Smith 1970s tennis style back onto the market after a 2-year absence. Launching in Barneys New York, Colette in Paris, Andreas Murkudis in Berlin and Dover Street Market in London, as well as Tokyo last November, the brand not only turned a good profit, but the shoes were an immediate sell out in the selected boutiques and Adidas stand alone stores.

The head of sport style at Adidas North America, Simon Atkins states that: “It’s absolutely the right time. Trends are shifting as we move into spring and summer. Everybody needs a pair of all-white casual shoes.”

Adidas supported their launch with a pop-up shop in London and hosting a party in January in Paris which included guests Benjamin Millepied and Kanye West. The sports brand continued to dominate the fashion world when French Vogue photographed supermodel Gisele Bundchen nude but decided to pair her with a classic white-with-green Stan Smith for the November issue.

Across the ocean, California based K-Swiss agrees that the trend could not come at a better time, said Chief Marketing Officer Barney Waters. The brand who had previously struggled to create it’s own identity, have now taken its tennis heritage and created a stripped-down, classic line for spring and fall 2014 echoing the court silhouette.

Stores which sell the line such as Urban Outfitters, Orva, Sportie LA and Karmaloop, as well as athletic fashion outlets Sneakerology and Foot Locker have all stated that K-Swiss‘ new line has received a great response. According to Waters: “The market has naturally swung our way and retailers are starting to realize that this is a train that is coming.”

Social media sites such as Instagram are now being monitored in order to check the consumer trends, a simple use of the hashtag #stansmith has close to 23 000 posts. Other departmental stores have also taken to the latest all-white trend, styles such as leather Vans laceups and the Converse for Maison Martin Margiela style coated in crackling white paint.

“The classic court shoe is an extension of the sneaker trend we have seen in recent seasons,” further stating “as many of the designs have offered exciting colours, materials, textures and shapes, there is also a demand for a classic, clean, minimalist shoe, without all the bells and whistles and built-in technology.”

As the athletic trend continues to gain momentum, with runways constantly acting as the catalyst, this could be the cure to end the bright colours and decrease the production with retro sneakers.

“[Brands] that don’t have clean white classics [models] will probably come out with clean white classics. It’ll be interesting to see.” said Johnson, who has also given notice that Foot Locker stores will now stock K-Swiss, styles from Reebok’s Classic collection, the Nike Air Force 1 in all white, which according to him is “a staple of the business” and the Adidas Stan Smith when it releases in late spring.

Analysts have said that this trend doesn’t cater to just one market or customer, but will have various customer bases. According to retailers the trend will rise during spring and continue to grow all through fall.

“We love a classic white sneaker always, but we have seen [more of them] in the market,” said Jeffrey Kalinsky, who owns the Jeffrey boutiques in New York and Atlanta, and VP and designer fashion director for Seattle-based department chain store Nordstrom.

From the fall 2013 buy of sales, the sleek white takes from Saint Laurent had a good performance on the sales floor, as they included versatility by being paired with everything from couture to casual. In the season to come, Kalinsky wants to buy a standout white leather version by Isabel Marant, “buying that trend for fall feels right.”

According to Atkins, Adidas will be expanding on the Stan Smith offer and will be giving more attention to some of the other classic looks of the same branch such as the Rod Laver and the Superstar.

Another brand that is hoping to capitalize on fall to be a big season is Lacoste. Dave Grange, president of Lacoste North America said: “We are seeing a strong trend in court coming through in clean classic lifestyle products and also incorporated with more luxury upper materials… [and] we are offering key looks across multiple styles for fall 2014 and into our 2015 collections.” Grange further adds that “court is such a versatile look that we feel it will be around for the foreseeable future.”

It’s obvious that brands and retailers are banking on this trend, not every store share the same big business enthusiasm.

Sneakerology owner, Gary Dwortz said he will be stocking the court styles from K-Swiss, New Balance, Nike and maybe Adidas, but will be keeping the inventory small.

Woody Kumetat, manager Ubiq boutique in Philadelphia, said that despite the expectation of the white-on-white merchandise from most brands in 2014, he doesn’t see the trend picking up  beyond that of the past. And that the young buyers still respond well to the brighter items.

For Karmaloop‘s Bond, he said that there is some room for the court trend to play with a bit of colour. “For holiday, we’re seeing tennis-inspired styles combine the classics with interesting materials, [fashion colours and even prints],” he said. “And we see that going into holiday and into spring 2015.”