Volcom is a global fashion brand, known for their innovation and exciting contributions to active sport and creativity. Their diversity and ventures into art, music, video and sporting events compliments the nature of their clothing and as a consequence has gained them an iconic brand image and cult following. One of my friends even has their logo tattooed on his arm – now that’s dedication! Founded on a snowboarding trip in 1991 by Richard Woolcott and Tucker Hall, Volcom became a fierce fashion brand, supporting skateboarding, surfing, snowboarding and motocross, as well as art, music and film. Their brand philosophy has always stuck firmly: Youth Against Establishment – a strong message to youth culture to not accept the ‘suppression of the established ways’.

Volcom will always stand for what’s good. They also have a conscience as a brand and often encourage the youth scene to get involved in sport by hosting vast competitions and events. Their need to nurture spreads further than youth culture, and they often involve themselves in charity ventures. They have just launched a event called ‘Give Jeans a Chance’. A fifth of the UK’s population lives below the poverty line and Volcom wanted to reach out to these people over the festive period. Give Jeans a Chance is currently running at the Volcom stores in London and Falmouth. They are collecting old denim and passing these kind donations to the Whitechapel Homeless Mission for redistribution. If you’re in the area and have an old pair of jeans or a denim jacket you don’t wear, drop it off before 15th December and you’ll be given a free Volcom cap, DVD or CD. Even better, if you get some fabric down to the London store by Saturday 10th December you’ll also be entered into a draw to win guest passes to see Gallows play in XOYO in London on 13th December. Help Volcom with a great cause over the season of merriment, and you never know – giving jeans a chance might get you to XOYO moshing with the mighty Gallows. If nothing more, you’ll get to take a slice of Volcom home with you, and everyone wants a piece of their globally renowned pie.

Check out  www.volcom.com/givejeansachance for further details. 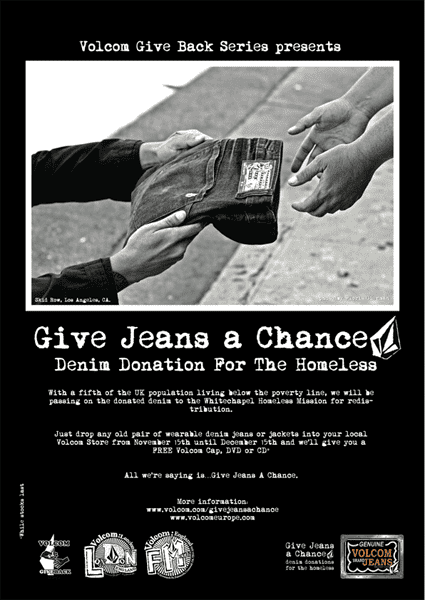