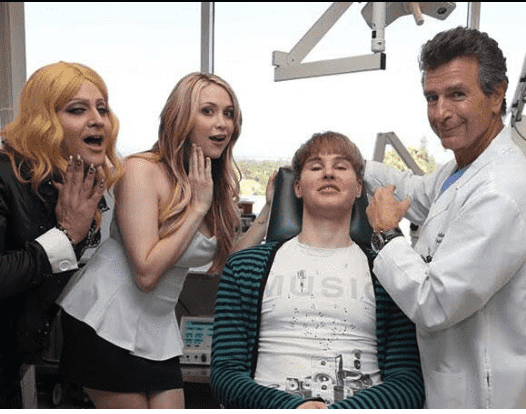 Take three celebrity obsessed morons: an overgrown Justin Bieber fan, a Jennifer Lawrence lookalike, and probably one of the worst Madonna impersonator’s imaginable, and watch in horror as a ‘super-group’ develops before your eyes. Naming themselves ‘The Plastics‘, the trio are keen to endorse an image of artificial beauty, and as the name suggests, a demented love for plastic surgery.

“Are you one of the boring ones, who don’t wanna be beautiful?“, a lyric penned by Toby Sheldon, the Justin Bieber lookalike; no doubt in vain attempt to cause controversy. Though with the knowledge that he is in fact a 33 year old man who has spent more than $100,000 to look like his idol, the hype surrounding this band begins to reflect the sorry state of the darker corners of the fame industry,

Together with Kitty Jay and Venus D’Lite, who have also gone severely under the knife to emulate their idols, Madonna and Jennifer Lawrence, their lyrics are fuelled with ticking off their countless surgeries and mindless ramblings of recreating their flaws and perfections, drawling the lyrics of: ‘Breasts now have silicone, sculpted cheeks and sculpted nose, so of course now I look like Jen, she’s a perfect specimen.’ Eurgh!

To reinforce their eccentric behaviour, there’s a real classification of such behaviour called Celebrity Worship Syndrome, whereby an individual becomes frantic in their obsession with a celebrity, but sources reveal these three don’t even have an excuse for their madness. Sheldon’s closest friends reveal that his sudden obsession with becoming Justin Bieber was “a bit of a surprise” and he had in fact “never really been a fan of Justin Bieber.”

Fellow bandmate Kitty Jay was told she resembled the Hunger Games star before she committed to surgery, before telling ABC News: “I’m trying to look like a very capable, very personal level-headed female who is an Academy Award winner.”

Perhaps most sickening is the fact that their manipulation is purely self-motivated in their bid for money and fame, so whether they’re taken seriously or not, the fact that their useless ramblings on the ‘awesomeness’ of plastic surgery reassures that it’s okay  to manipulate and botch bodies to the extreme, really isn’t okay.