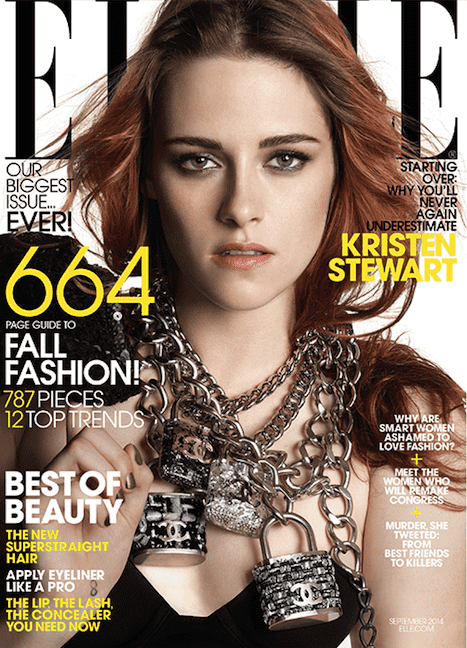 ‘I feel like if I smiled for a paparazzi photoÃ¢â‚¬”not that I ever wouldÃ¢â‚¬”that’s exactly what people would be desecrating me for. They’d be like, ‘now you’re going to give it up, now you’re a sellout.’

Honest words and a pop-arty photo shoot to compliment her statement, Kristen Stewart knows far too well the downsides of the paparazzi upon her reputation. So aptly themed for her ELLE September issue cover shoot, Kristen plays up to the media frenzy and recreates what we could only imagine a surreal superstore shopping trip would be like for the 24 year old. Sharp and edgy, Kristen’s trademark moody pose is set against the backdrop of Fields Market in West Hills, California as she speaks openly about her career boom and how she’s avoiding the Hollywood trap. 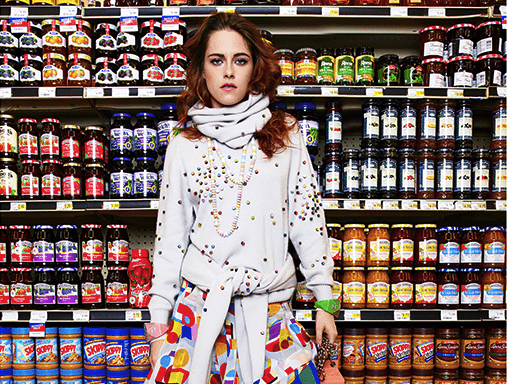 “Never at any point have I sat down and plotted how I should proceed from here on. As soon as you start thinking about your career as a trajectoryÃ¢â‚¬”like, as if you’re going to miss out on some wave or momentumÃ¢â‚¬”then you’re never doing anything for yourself anyway. Then you’re truly, actually, specifically working for the public. You’re turning yourself into a bag of chips,” Kristen states.

Although Kristen – now 24 – grew up in the Hollywood glare, she admits that despite successful early roles in films such as Panic Room, she quickly had to adapt her lifestyle after the overwhelming popularity of the Twilight Saga. Kristen explains that: “The day the movie came out there was a picture of meÃ¢â‚¬”in the New York Post, I think. I was sitting on my front porch, smoking a pipe with my ex-boyfriend and dog. And I was like, Oh shit, well, I have to be aware of that.”

More of the in-depth interview and the accompanying photo shoot can be found exclusively in the September issue of ELLE Magazine, available in selected stores on August 12th, and nationwide from August 19th.

In celebration of Kristen’s ELLE September Issue, we’re revisiting our favourite of her cover shoots in the gallery below. From the bizarre to the serenely feminine, see the changing faces of grunge’s poster girl.