Cara Delevingne‘s reputation for goofy antics and a relentless work schedule clearly wasn’t noted ahead of her appearance on popular US morning show, Good Day Sacramento. The model-turned-actress’ recent interview with the breakfast show might just be Tinseltown’s most cringeworthy interview ever. 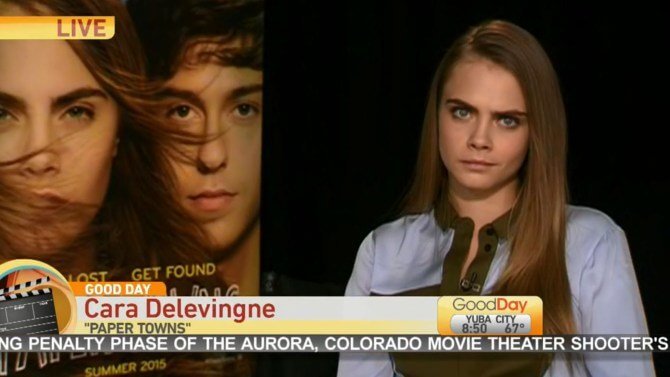 Currently in the US to promote her new film Paper Towns, Cara’s placid nature was tested to the brink by a barrage of negativity and criticism from the hosts. Barely five seconds into the interview, presenters made the grave mistake of introducing the star as ‘Carla’, before probing whether she’d actually read the book or script for Paper Towns. Seriously, guys?

By this point, most stars would have thrown a tantrum or walked out, but Cara pushed on, and her response was priceless. As the interview grew even more awkward, Cara’s responded to the presenters’ negative attitudes in the most British way possible: with a heavy dose of sarcasm and subtle, contained irritation.

When the presenters failed to react to Delevingne’s sarcasm, the star replied honestly, but was once again irked when another presenter had the nerve to say: “I saw you in London talking a couple of weeks ago on TV and you seemed a lot more excited about it than you do right now. Are you just exhausted?”

The atmosphere then grew frostier and the hosts provoked Delevingne further, saying she seemed “a little irritated” and “moody”, before rounding off the interview by telling her to “take a nap and get a Red Bull.” You can watch the video here.

In the aftermath of the drama, both parties have been criticised for their their attitudes, but Cara has defended her actions on Twitter, stating; “Some people just don’t understand sarcasm or the British sense of humour”, also receiving support from Zach Braff.

When Suicide Squad is released next year, we doubt Cara will be welcoming a good morning in Sacramento.