Iconic Smith’s frontmanand controversial character, Morrissey, is this year’s face of popular street wear brand, Supreme. In previous years, Neil Young and Lou Reed have also collaborated with the New York brand and, while the campaign hasn’t officially begun yet, posters showing Morrissey wearing the iconic box logo t-shirt have been popping up around Japan, NYC and France with the images likely to also appear on T-Shirts and stickers. Supreme’s spring/summer collection will be available this Thursday in their New York, Los Angeles and London stores.

However, there is a twist. As usual, in seemingly most of Morrissey’s cases, he’s unhappy and has complained about it. On Saturday, Morrissey took to his website “True to You” and posted a statement saying he was apologetic for the “enfeebled” photograph of him taken in 2015 by the infamous Terry Richardson. According to Morrissey, he “pleaded with Supreme not to use it” after learning that the popular clothing brand were sponsored by American fast-food hamburger chain, White Castle, or in Morrissey’s words, “the beef sandwich pharaoh.” I can understand Morrissey’s shame, he is an avid animal rights activist; in 2011 he was voted as PETA’s person of the year, it doesn’t look good to be an animal rights icon who arguably turned vegetarianism into a mainstream movement in the UK and someone who is notorious for banning meat from many venues he plays at (including Madison Square Garden in New York) while also being the face of a popular brand sponsored by a major hamburger chain. 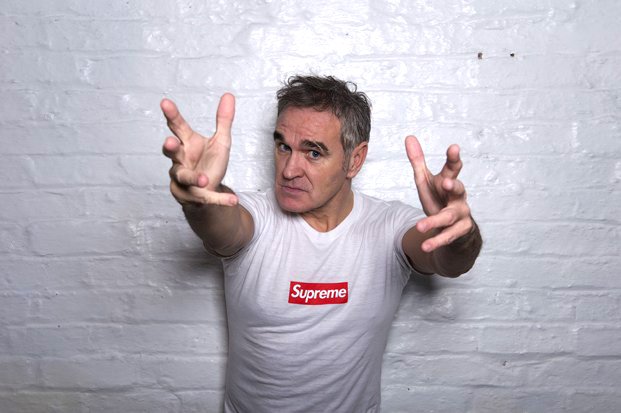 Supreme responded to Morrissey’s statement on their Facebook page suggesting that details of the photoshoot were explained to Morrissey and that they were under the agreement “that that he could not unreasonably withhold approval of the use of the shots during the session.” However, when Supreme offered Morrissey several options of images to use for the campaign he rejected them all with no clear reason, according to the brand, Morrissey then “proceeded to assert a sudden and ridiculous claim that because Supreme had used the White Castle logo on a group of products in the past, and because he is a known vegetarian, that the agreement was supposedly terminated.” While it’s true that Supreme used the White Castle logo on previous products back in 2015, the brand’s association with the fast food chain is very limited. Morrissey refused to repay his fee, so Supreme will be using the images, despite Morrissey’s clear discomfort.

Morrissey is notorious for things like this, often cancelling shows for no apparent reason and sparking feuds. However, I feel that because veganism is such a massive part of what Morrissey is known for and what he’s about, they probably should have made it clear to him that they had worked with one of the biggest fast-food hamburger chains in the world…maybe they should have tried endorsing Johnny Marr instead. But controversy is always good publicity and it could be argued that Morrissey’s “spat” with Supreme will make their SS16 collection even more popular while also giving Morrissey an opportunity to speak about his views on animal rights and veganism.

In this article:Morrissey, Supreme, The Smiths