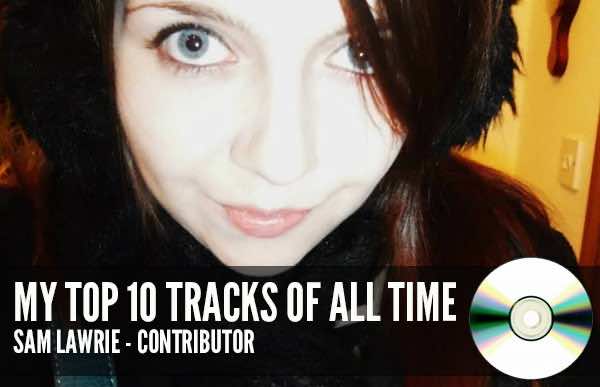 Hi all, it’s HTF contributor Sam here! Choosing just ten top tracks is difficult enough, but of all time? That’s a pretty big selection to choose from! My musical tastes spread across many genres and decades, so I’ve tried to be as eclectic and varied as possible with my list to reflect that. I’ve got so many favourite tracks, so this is really only a taster of some of my most beloved music. Let me know if any of them would make your Top 10 too!

I was fairly late getting into Dashboard Confessional – by the time I first heard of them, they were almost ready to release their sixth album, ‘Alter the Ending‘. Every Dashboard Confessional album has its own unique aspect that shows a different side to the band; acoustic sounds, electric guitars, upbeat tunes, youth, heartbreak and melancholy. Because of this, it’s extremely difficult to choose just one stand-out track. If I’m feeling down or going through a bit of a rough patch, many of their songs would be just perfect for crying into your cereal bowl first thing in the morning; however, I’ve been in a relatively good mood lately, so I’ve gone for the short, sweet and sunny ‘Thick As Thieves‘.

I’ve always had a love for those classic party rock tunes that get everyone up on their feet and singing at the top of their lungs. For me, this is one of those songs. Meat Loaf made an awesome rockstar back in the day, and his songs are all bursting with energy and fun. This duet with Cher is powerful, sexy and such a feel-good track to blast out at full volume, and continues to be a song I can listen to over and over again without ever getting bored.

I’m a big Papa Roach fan now, but hearing this song was what initially sealed the deal for me. When I first heard ‘Scars‘, the feel of the song alone moved me and I immediately looked up the lyrics online. After listening to the song a few more times and really understanding what it meant, I realised it pretty much summed up exactly how I was feeling about myself and my life at the time. It has continued to fit into so many personal situations I’ve found myself in over the years, and it never fails to touch my heart whenever I hear it. It’s undeniably one of my favourite ever songs.

In my opinion, ‘Common People‘ is one of the best songs ever written. Period. It shouldn’t have been as successful as it was – the structure is all over the place, the lines are too long and Jarvis Cocker can’t seem to make up his mind whether to speak or sing throughout the song. However, when you listen to the lyrics, it explains exactly how it feels to come from a poorer background and how more privileged people simply can’t seem to get their heads around that kind of lifestyle. No other song speaks about this in such a stark, blunt way, yet with such brilliant sarcasm and wit. Lyrically, ‘Common People‘ is a genius track.

When I Come Around – Green Day

Again, it was almost impossible for me to pick a favourite track from my one of my favourite bands. Scratch that- my favourite band. Having been around for over 25 years and released eleven studio albums, Green Day have a huge back catalogue to choose from. I love all of their albums, and the majority of their songs, but ‘When I Come Around‘ has always been one of my most treasured of their offerings. It’s gritty with a dirty riff and Billie Joe’s distinctive punk drawl, along with fantastic lyrics and a typically Green Day music video. As any fan knows, it’s simply one of the greats.

Emotional, mysterious and haunting, ‘Round Here‘ is one of Counting Crows’ most touching songs. They have so many beautiful songs that all mean different things to different people, despite how cryptic some of Adam Duritz’s lyrics may be, but ‘Round Here‘ is the one that really speaks to me. It’s sad and painful at moments, yet also inspiring and thought-provoking. If you’re in the right- or the wrong- frame of mind, the emotional connotations of this song can hit you like a tonne of bricks. But, hey, something that has the ability to move me to tears in the space of five and a half minutes deserves a place on this list.

This is the classic nostalgia track that has to be featured in anyone’s personal ‘Top…’ list. I used to hear ‘When You’re Gone‘ on the radio when I was only four or five years old, and ever since it’s just stuck in my head as a really great pop song. Perhaps it was my love for the Spice Girls at the time fused with what would become a love of rock music in later life that drew me to the song- who knows? All I do know is that it was probably the first song I ever truly loved, and I definitely still love it now.

This is How I Disappear – My Chemical Romance

Yet again, one of my favourite bands who have so many great songs to choose from. ‘The Black Parade‘ introduced me to My Chemical Romance (although I have since realised that ‘Three Cheers for Sweet Revenge‘ kicks the butt of anything they released since) and, despite appreciating the more commercial tracks such as ‘Welcome to the Black Parade‘ and ‘I Don’t Love You‘ as much as the next person, it was ‘How I Disappear‘ that really struck me. It’s such a furiously energetic and passionate song that it almost has a raw quality to it unseen since their punkier debut album. It may be one of their lesser known tracks but, for me, it’s definitely one of the best.

I can be such a sucker for pop rock, so I can’t help but feature ‘Mr. Brightside‘ as one my top tracks. It’s a great song about the all-consuming nature of jealousy and paranoia which, let’s face it, is something we’ve all experienced at some point in our lives. ‘Mr. Brightside‘ pinpoints the total bitterness and rage that we find ourselves feeling when the green-eyed monster rears its head, making it a great outlet for when you’re experiencing those emotions. But, when you’re not, it works just as well as a fun sing-a-long tune!

‘Three Cheers for Five Years‘ is the first Mayday Parade song I ever heard, and I just absolutely adored it. It’s a beautifully emotional song, where the band open themselves up and pour their hearts out into their music- something we now know as a Mayday Parade trademark. Its different elements take you on a journey through the singer’s eyes, or your own, depending on how closely you relate to the song. It’s helped me through some difficult times in my life, and I’m sure will continue to do so when the next inevitable disaster comes along!